The "top culprits" are accused of committing crimes during leftist demonstrations at the Hamburg G20 summit in 2017. It comes as one man was arrested in Hamburg, where police conducted raids relating to the protests. 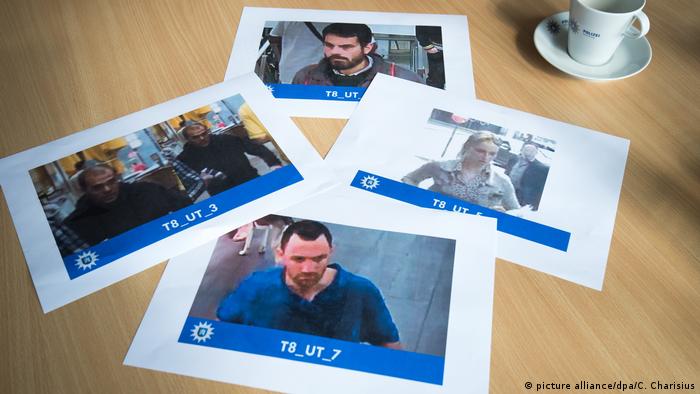 Hamburg police on Tuesday launched a Europe-wide manhunt for four suspects involved in riots during the G20 summit in the northern German city of Hamburg in July, 2017.

Police released photographs of the suspects — three men and one woman — and urged anyone with information on their whereabouts to contact police.

The four are suspected of being involved in a series of arson attacks along Hamburg's Elbchaussee Street during the so-called "Welcome to Hell" demonstration on July 6, which are estimated to have caused €1.5 million (1.75 million dollars) in damages.

The Hamburg protests saw several hundred hard-left activists create a "black bloc" as they clashed with police forces on July 6 and 7 in 2017, first on the Elbchaussee thoroughfare and then during the evening in the Schanzenviertel.

"These are the top culprits of the G20 riots," said Jan Hieber, head of a special commission, adding that those involved were not demonstrating under their right of assembly.

"It was a commando operation that was meant to spread fear and terror," Hieber said.

The launch of the search came as police arrested a 35-year-old man in Hamburg, German news agency dpa reported.

"Black bloc" investigators had been carrying out enforcement measures, including raids on properties, in the port city on Tuesday morning, as well as in the two states of Schleswig-Holstein and North Rhine Westphalia. Police did not say why the man had been detained.

The four suspects are also accused of committing crimes including seriously disturbing the peace, resisting police officers, assaulting enforcement officers, causing bodily harm by acts such as throwing glass bottles and stones at police, as well as looting supermarkets and building barricades which were then set on fire, Hamburg Police wrote in a press release.

The Europe-wide manhunt is focused on Italy, Spain, France and Switzerland, as a previous search in May was, but will also focus on Austria, the Netherlands, Belgium, Denmark, Sweden, Finland and Greece, Hieber said. Many of the suspects in the riots are thought to have come from abroad.

The special commission is currently searching for 109 people throughout Europe. In Germany, police have so far searched for 585 suspects, with 41 of them identified, Germany's Focus news magazine quoted Hieber as saying. Since December last year, 278 people have been included in the nationwide public search with 71 of them now identified, he added.

German authorities plan to forward videos and photos of suspected Hamburg G20 rioters to their counterparts in southern Europe. Damages from the street battles between protesters and police could surpass €12 million. (02.02.2018)