German parliament passes bill in fight against child pornography sites | Germany | News and in-depth reporting from Berlin and beyond | DW | 19.06.2009

The German lower house of parliament, the Bundestag, has adopted a new set of laws making it possible to block child pornography Web sites. 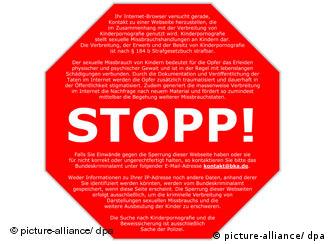 Will this stop Internet child pornography?

The legislation requires Web hosting companies to post "stop" signs when internet users try to access child pornography sites. The bill still has to go through several stages before it becomes law.

The motion has been the subject of a protest petition, with opponents claiming it is a first step towards Internet censorship. The petition has gathered 130,000 signatures calling for the bill to be scrapped.

The proposed law has been promoted by Family Affairs Minister Ursula von der Leyen, who claimed it was an "important sign from society.

"We in Germany won't stand for it any longer that images of children being raped can be called up on the Web," said Leyen.

Lawmakers modified the bill to respond to the criticism and added a sunset clause whereby the legislation would expire after three years.

Others claimed that the bill did not go far enough in restricting access to child pornography.

Internet users will still be able to access child pornography sites even after the stop sign appears, but they will have to click through the warning, which informs them that viewing child pornography is a crime.

Once the legislation passes, police officials will have to draw up a list of Web sites that feature child pornography and send the list to all telecommunications companies.

The bill also requires Germany's chief privacy commissioner, Peter Schaar, to regularly view the lists. Schaar has opposed this, saying it is not his job.

A petition against legislation designed to block harmful websites, such as those dedicated to child pornography, has collected more than 50,000 signatures after being posted online four days ago. (08.05.2009)

German internet providers have grudgingly agreed to block websites containing child pornography. Critics say their deal with the government won't make much of a difference. (17.04.2009)

Plans to make it harder for pedophiles to access Internet child pornography were agreed Wednesday by the German cabinet, but critics claim that the proposed changes will have only a limited effect on hardcore consumers. (25.03.2009)