A petition against legislation designed to block harmful websites, such as those dedicated to child pornography, has collected more than 50,000 signatures after being posted online four days ago. 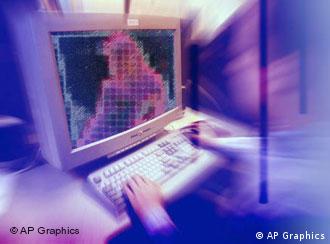 Internet censorhip is now under attack

That number is the minimum required by German law for parliament to open hearings on the issue.

The petition is the brainchild of 29-year-old Berlin resident Franziska Heine, in response to a telemedia bill which was approved by the German cabinet last month, but still requires parliamentary approval.

The proposed legislation would require the vast majority of the country's internet service providers to block child pornography sites, as identified by the German Federal Criminal Office (BKA).

Heine claims the bill threatens the fundamental right to freedom of the internet. Her fellow critics claim that lock-outs and blocking of websites are ineffective and can be bypassed. They see the BKA list as a tool for censorship. 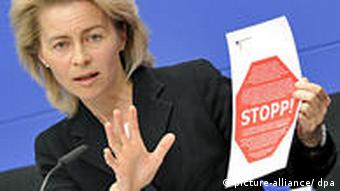 "The numbers are exploding - the distribution of such pictures doubled last year," she said. "Children's souls and bodies are being torn apart by brutal rapes."

Von der Leyen supports having the BKA maintain a list of service providers who provide access to these websites.

The petition was placed on the German parliament's website of the Committee on Petitions. Organisors are hoping to reach 100,000 signatures by June 16.

Germany to crack down on Internet child pornography

Family Minister Ursula von der Leyen says she wants online service providers to block offensive Web sites. She says it is up to Internet firms to pull the plug "immediately" on child pornography. (20.11.2008)

Police in the southern German state of Baden-Wuerttemberg have said they've broken up a global child pornography ring involving some 9,000 suspected paedophiles in 92 countries. (17.04.2009)