German officials set their sights on ′child marriage′ | Germany | News and in-depth reporting from Berlin and beyond | DW | 04.09.2016

German officials have encountered hundreds of married minors among refugees. Judges are struggling with legal ambiguities and must treat most cases individually. A working group has been set up to study the issue. 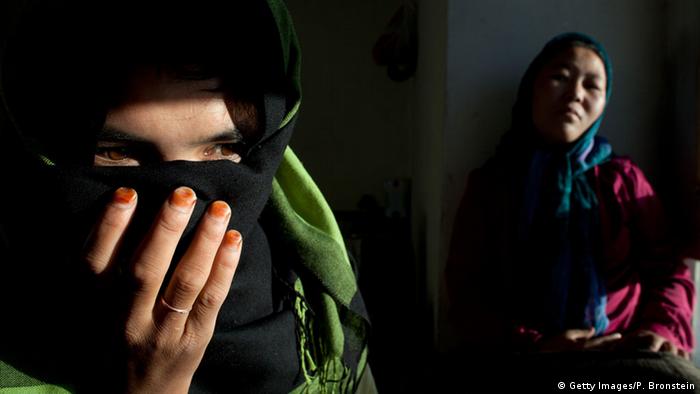 A 14-year-old girl married her 21-year-old cousin in Syria. They fled the civil war together and eventually arrived in Aschaffenburg, where the Youth Welfare Office refused to recognize their marriage and took the girl into care - for reasons of child protection. Her husband appealed to the family court, and initially lost the case.

The regional court in Bamberg chose to set the judgment aside, citing the principle in German law that marriages conducted abroad should be judged according to the laws of the country of origin, making the union legitimate. The city of Aschaffenburg has appealed, and now it's up to the federal court to decide.

Special exemptions have made marriages involving minors legal in Germany for a long time, though many representatives of human rights groups, as well as lawyers and politicians, believe that such unions should be completely banned. In a draft resolution, members of Chancellor Angela Merkel's Christian Democrats and their Bavarian allies in the Christian Social Union wrote that "an 11-, 13- or 15-year-old girl belongs in school, not in a marriage." There are increasing demands for a more consistent policy against marriages involving minors, and Justice Minister Heiko Maas has set up a federal and state working group to draw up consistent rules.

Under German law, people can legally marry at the age of 18. However, family courts may make exceptions if one partner is of age and the other is at least 16. So "child marriages" take place in Germany, too.

The main question that the members of the working group are to address is whether the marriages of young refugees abroad should indeed be recognized in Germany. Authorities have encountered a large number of marriages involving people younger than 18 while registering minors as refugees. Data collected by the federal states suggests that there are about 1,000 "child marriages" among refugees currently living in Germany - more than half of which are in the southern state of Bavaria. In the majority of cases, the girls are 16 or 17 years old. Little concrete data is available on their husbands or the dates of their marriages. However, as refugees are not obliged to give details of their marital status, these statistics are unreliable. The true number may well be higher.

Family Affairs Minister Manuela Schwesig has declared her opposition to the practice. She cites the UN Convention on the Rights of the Child, saying minors have "the right to play, education and health - in short, to a carefree childhood." She said forced marriages should not be accepted.

Bavaria's state justice minister, has called on the government to no longer recognize the marriages entered into abroad with girls younger than 16. The justice minister of North Rhine-Westphalia takes that a step further: Thomas Kutschaty said Germany must consider only recognizing marriages in which both partners are of legal age.

This would presumably be welcomed by child protection advocates such as Myriam Böhmecke, from the organization Terre de Femmes. She wants to abolish all child marriages. "We're not saying that people should be forced to divorce," she said, "but that the marriage should not be recognized." An underage married girl would then be classed as an unaccompanied minor, meaning that there would be more possibilities for protecting her.

Rainer Becker, the chairman of the NGO Deutsche Kinderhilfe, said it was important to consider occasional exceptions and that a blanket ban on marriages involving minors abroad did not acknowledge the complexity of the issue. "Not all of these marriages are necessarily forced," he told DW.

As 16-year-olds can, in principle, get married in Germany, unions involving 16- and 17-year-old refugees usually are recognized, though those involving children younger than 14 are not. Individual judgments are made in the case of marriages involving minors aged 14 and older.

In many of the refugees' countries of origin, "child marriages" are not legal. In Syria and Afghanistan, for example, the minimum age is 16. For boys, it is usually a little older. However, exceptions can be made.

According to UNICEF, girls in particular are married off early or choose to marry young. It is less frequent with boys. There are often economic reasons for it, UNICEF reports: Girls are regarded as a burden - not as future breadwinners. For many families, their dowries are very important.

Böhmecke, of Terre des Femmes, said a lot of minors were currently marrying in refugee camps in Lebanon, Jordan and Turkey. Because of the extreme economic uncertainty in such conditions, parents are trying to guarantee girls' futures. "The families are also afraid that their daughters will be the objects of sexual attacks," Böhmecke said, "and so they often marry them off early."