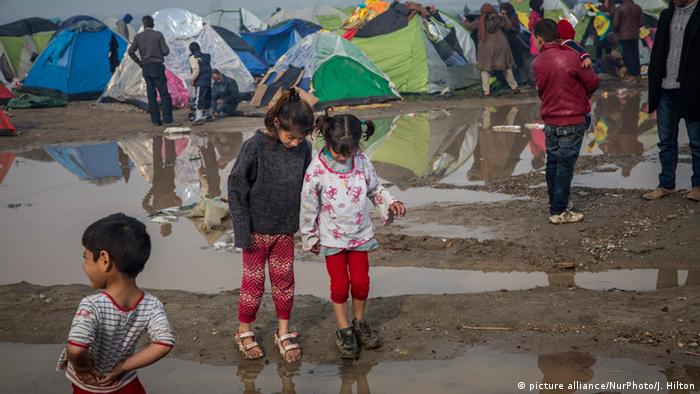 Gordon Brown, speaking in his role as UN special envoy for global education on Monday, said the creation of the initiative was prompted by the war in Syria.

An estimated 20 million children have been forced to leave their homes and schools due to current conflicts, according to Brown.

"When we ask ourselves what breaks the lives of once thriving young children, it's not just the Mediterranean wave that submerges the life vest and it's not just the food convoy that does not arrive in Syria," said Brown. "It's also the absence of hope - the soul crushing certainty that there is nothing to plan or prepare for, not even a place in school."

Education is key to refugee kids in Turkey

With Turkey now home to over two million Syrian refugees, school places, which are key to integration, are in short supply. An Istanbul suburb has launched a pilot project to address this problem. (26.04.2016)

The UN intends to launch the initiative, the first of its kind, at the World Humanitarian Summit in Istanbul next week. The program, dubbed Education Cannot Wait, seeks to raise $3.85 billion (3.42 billion euros) from private and public donors over the next five years.

The vast majority of people fleeing the war in Syria stay in the region, according to Brown. It would take close to $800 million per year to send Syrian children to school in camps across Jordan, Turkey and Lebanon.

At the same time, parents would be less likely to head to Europe if they believed their children could get an education close to Syria, said the former prime minister.

Brown also called for more help for asylum seekers in Europe, but stated that "the biggest problem and the biggest number of people who need help, particularly children" were staying near to the conflicts that had driven them away from home.

The children are in danger of becoming "victims of child labor, child trafficking and child marriage" and eventually forming a "lost generation," he said.

From Syrian refugee to restaurateur

Pressure to get vaccinated is mounting in Italy after the government said all employees must show evidence of a shot, negative test or recent recovery from COVID-19. Follow DW for more.

Ukraine says all women, children and elderly out of besieged Azovstal plant — as it happened 07.05.2022

All women, children and elderly people have been evacuated from the besieged Azovstal steel plant in Mariupol, Ukraine says. Meanwhile, Russian missiles struck the port city of Odesa.