German laws protecting youth must also be applied to refugees, the government has said. Concern is rising over the increase in cases of young girls being forced to marry before their arrival in Germany. 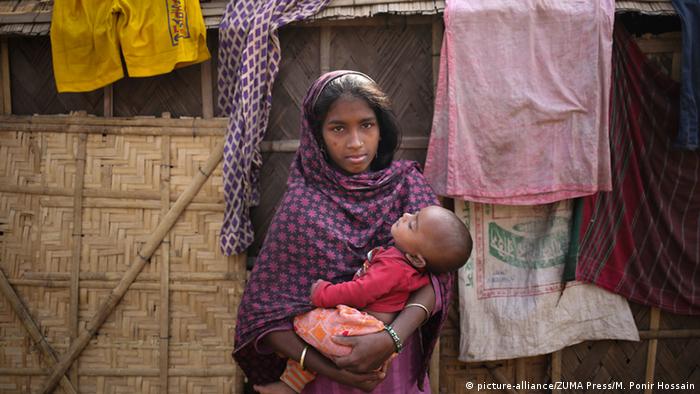 Berlin was considering tightening legislation against child marriages on Monday in light of the refugee crisis. Chancellor Angela Merkel's government has expressed its concern that migrant children who entered into marriages abroad may be forced to continue living in such marriages upon arrival in Germany.

Twenty-year-old Christina Ijabla was kidnapped by Boko Haram in Nigeria two years ago and managed to escape from a prison camp about a month ago. She spoke to DW about her life in captivity and the fate of the Chibok girls who were kidnapped in April 2014. (31.05.2016)

"We need a clear law," said Thomas Kutschaty, a Social Democrat (SPD) and justice minister for the state of North Rhine-Westphalia to the daily "Bild" newspaper.

According to the paper, there are hundreds of child brides living in Germany. The recent wave of migration to Europe has seen that number of minors married to each other or to adults increase significantly. In May, a judgment by a court in the Bavarian city of Bamberg made it clear that these marriages are not valid in Germany.

Volker Kauder, parliamentary head of Merkel's Christian Democrats (CDU), said the Bundestag needs to debate and develop stronger laws. Germany "cannot accept the oppression of women in whatever form it may take," he told Bild.

"We cannot accept forced marriages. These cases shows that our child and teenager protection laws must also be extended to refugees," said Federal Family, Women and Youth Minister Manuela Schwesig.

In Germany, the age of majority is 18. The youngest age allowed for marriage is 16, and then only if the other partner is a legal adult, and parents or a family court have granted permission.

About 5 million people have fled Ukraine, most of them to neighboring countries. They have been met with solidarity and support by governments and citizens, but there are also questions and concerns. DW's Thomas Sparrow explains.