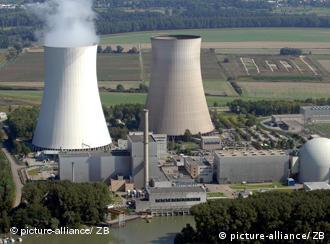 The future of environmental protection, according to the German nuclear lobby

Germany's nuclear lobby has always struggled with public relations. It faces a public which largely mistrusts nuclear energy, and a well-organized and determined contingent of anti-nuclear activists which mounts regular protests.

But the country's nuclear industry has massive investments in nuclear energy to recoup. And their power plants don't emit CO2, which helps the German government uphold its end of the Kyoto protocol.

Events at Japan's Fukushima nuclear plant, however, have turned nuclear power into an even more severe liability for German politicians.

Chancellor Angela Merkel announced on March 15 that seven of Germany's oldest nuclear plants will be shut down for at least three months. During that time, a moratorium on extending nuclear plants' effective lifespan is in place. 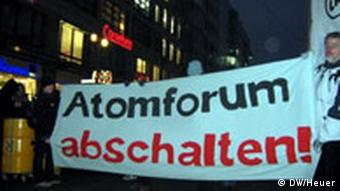 Public anger against the nuclear lobby in Germany has been widespread

Last year, her government angered its opposition by voting to delay Germany's exit from nuclear power. It extended the lifespan of the country's 17 nuclear power plants past their previously planned 2021 final shut-off date.

Lobbyist Ralf Güldner, president of the German Atomic Forum, has changed his tune in light of the recent events. He used to emphasize that nuclear power is an "indispensable contribution to climate protection" and has "huge potential for technological development."

Güldner now speaks more guardedly. He's for testing the security of nuclear plants - assuming a series of catastrophic events - to see if their security should be upgraded.

"If that is technically impossible for individual facilities, then there will be consequences," he recently said. "Safe - that's always a relative term, after all. And we find ourselves in the range of residual risks." 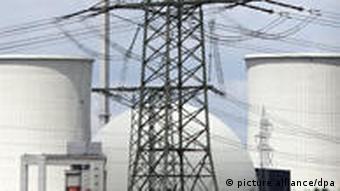 Even if Güldner understands that German's energy politics are contained within larger political ramifications, his lobby has always worked to influence those ramifications as much as possible.

As Left party leader Gregor Gysi recently said in the German parliament: "The nuclear industry doesn't only have financial and economic power; not only do they have formidable influence over political decision… They dominate these decisions, along with the federal government, and a large number of parliamentarians."

In addition to pro-nuclear lobbyists, others from Germany's energy companies leave traces of their handiwork in Berlin. A 2008 strategy paper, written by consultants of the energy giant Eon, outlines methods and effective arguments for winning people over to nuclear power.

In more than 100 pages, the paper downplays the dangers of nuclear power, implying its use is inevitable and that alternatives are lacking. It also presents nuclear power as essential to a secure power supply and protection against climate change. Eon denied involvement in the paper once it became public. 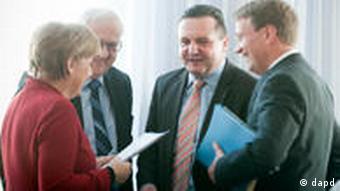 Decisions about nuclear power are made behind closed doors, critics say

The efforts of pro-nuclear lobbyists do not go unnoticed by environmental activists. Take, for example, the "Worst EU Greenwash Award," with which Güldner's German Atomic Forum was chided in 2007.

The offending ad campaign featured pictures lauding Germany's "Underappreciated Climate Protectors." Depicted were pastoral scenes of sheep grazing on emerald pastures with bright blue skies overhead. On the horizon was a German nuclear power plant and a headline reading "This Climate Protector Fights 24 Hours A Day To Keep With the Kyoto Protocol."

When the German parliament voted in November 2010 to extend the lifespan of Germany's nuclear reactors past 2021, pro-nuclear lobbyists had performed with an exceptional level of effectiveness.

Social Democratic Party leader and former Environment Minister Sigmar Gabriel said the decision was made behind closed doors. He criticized the parliamentary debate which occurred at the time as little more than lip service.

"By the time we voted in parliament, everything had already been decided long ago," he said. "They had worked everything out neatly behind closed doors with the gentlemen from the pro-nuclear lobby."

However powerful, Germany's pro-nuclear lobby will likely need a new post-Fukushima strategy if it wants to end its defensive position. The groundwork for such an effort may already be in place.

Widespread media reports now indicate electricity prices will be rising without the seven nuclear plants idled by Merkel this month. It's an unusual dilemma for a country which still produces more electricity than it consumes.

Germany has suspended plans to prolong the lives of its nuclear power plants after the problems in Japan. But was this a safety-conscious reaction, or an electioneering tactic? Even coalition leaders appear undecided. (24.03.2011)

Germany could cover its energy needs without nuclear power by 2017, the research group for the environment ministry has said. It added that by 2050, all the country's energy needs could be covered by renewables. (17.03.2011)