The Toi moko, tattooed heads of Maori men, had been brought to the museum in 1879 and 1905. The museum said the repatriation was "a signal of reconciliation to the societies affected by colonialism." With a ceremony and prayers, Berlin's ethnological museum on Monday marked the official repatriation of two mummified Maori heads to New Zealand.

The tattooed heads of Maori men, known as Toi moko, were considered a collector's item in 19th century Europe. The demand for them was so high that slaves and prisoners of war were tattooed and then killed so that their heads could be sold.

The Toi moko had been brought to the museum in 1879 and 1905. The names of the men to whose heads were mummified, their fate and the exact route by which they arrived in Europe are unknown.

But museum documents show that one was acquired from an amateur ethnologist and another was donated to the museum by a traveler and geographer, who had never been in Oceania.

"Today's ceremony marks the beginning of the return journey of the Toi moko from the Ethnological Museum," said Hermann Parzinger, President of the Prussian Cultural Heritage Foundation (SPK) which runs the museum.

"For the SPK it is the first repatriation of mortal remains, and I am very happy that this could take place this year despite the pandemic situation. I would like to thank our New Zealand partners very much for the uncomplicated cooperation and the fruitful exchange with them," Parzinger added. 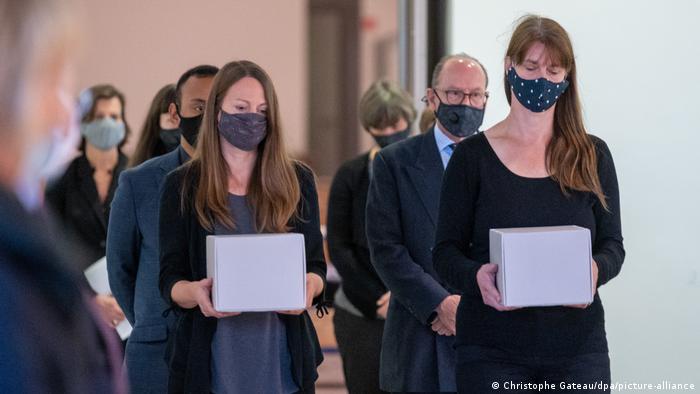 The two heads were repatriated with a traditional Maori ceremony

The move was "a signal of reconciliation to the societies affected by colonialism," Monika Gruetters, federal commissioner for culture and the media, said in a statement.

The museum ceremony began with a karanga, a traditional call of the Maori women, which pays tribute to the ancestors. The two mummified heads were carefully carried into the ceremony room in containers, carefully placed on a table and covered with black cloth.

Karakia, historical prayers or invocations, were recited to honor the heads' journey home and to ensure their safety.

After the prayers, the coordinator of the repatriation program of the Museum of New Zealand Te Papa Tongarewa, Mr. Te Arikirangi Mamaku held a formal speech in Maori to pay respect to the remains and the hosts, while honoring the ocassion.

"We are constantly learning new things from our own provenance research, but also from exchanges of this kind," Parzinger said.

"And we will do everything possible to continue down this path in order to right historical wrongs," he added.

The museum, one of the world's largest of its kind, has been tasked since 2003 with returning Maori remains to New Zealand.

In September, the museum announced the return of ancestral Aboriginal remains to Australia, including the mummified bodies of two children as well as human bones in a wooden coffin.

The Mandu Yenu throne: A gift from the colonial era

The Charité hospital in Berlin returned the skulls of 109 Maori and Moriori people taken to Germany more than 100 years ago. The remains were handed over to New Zealand's national museum in a ceremony.

The Prussian Cultural Heritage Foundation has returned pieces of its collection to members of the Alaskan Chugach tribe. The exhibits had been acquired through looting.