The Charité hospital in Berlin returned the skulls of 109 Maori and Moriori people taken to Germany more than 100 years ago. The remains were handed over to New Zealand's national museum in a ceremony. 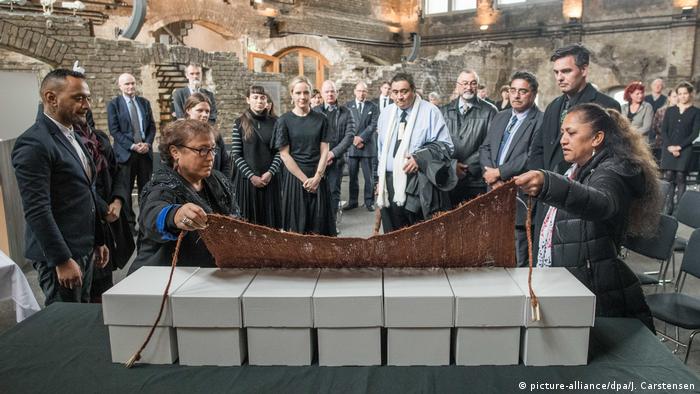 The Museum of New Zealand Te Papa Tongarewa received the remains of more than 100 members of the country's indigenous community in a ceremony in Berlin on Monday.

The skeletons and skulls were taken from graves of indigenous Maori and Moriori men and women — the indigenous people of the Chatham Islands — in the late 19th and early 20th centuries. A spokesman for the Berlin museum said the remains were probably taken against the will of the indigenous communities and brought to the German capital.

"Right from the start it was wrong to assume that there were hierarchies among peoples," Charité superintendent Axel Radlach Pries said. The museum's director, Thomas Schnalke, said the Charité was acknowledging ethically responsible scientific principles in returning the remains.

Arapata Hakiwai, from the Te Papa museum, and Maui Solomon, who led a delegation from the Moriori community, said the links with their forefathers made it a duty to take their remains home.

Hakiwai said that by repatriating the remains of indigenous people, it is now possible to close "a very dark chapter in our history."

Maori and Moriori family members marked the return with prayers and traditional songs of their forefathers. The Te Papa museum had officially requested the return of the remains in 2010.

The repatriation program administered by the Te Papa Museum was established and funded in 2003 by the New Zealand government, after it heeded Maori pleas to have their ancestors returned home. Te Papa has since repatriated the ancestral remains of hundreds of Maori and Moriori from overseas institutions.

Over the years, some institutions have show an increasing desire to cooperate. The French government created special legislation in 2011 to allow Maori remains held in its institutions to be returned. Others, however, have been reluctant to relinquish their collections. Temara is hesitant to name these institutions for fear of jeopardizing ongoing negotiations.

Two weeks ago, the remains of 42 indigenous Australians from museums and collections in the German states of Saxony and Saxony-Anhalt were returned to the Embassy of Australia.