German military struggles to reconcile global demands with aging aircraft | Germany| News and in-depth reporting from Berlin and beyond | DW | 26.09.2014

The German military is deployed in hotspots around the world from Afghanistan to Africa. But it relies on an aging fleet of transport planes and helicopters that are in the shop more than they are in the air. 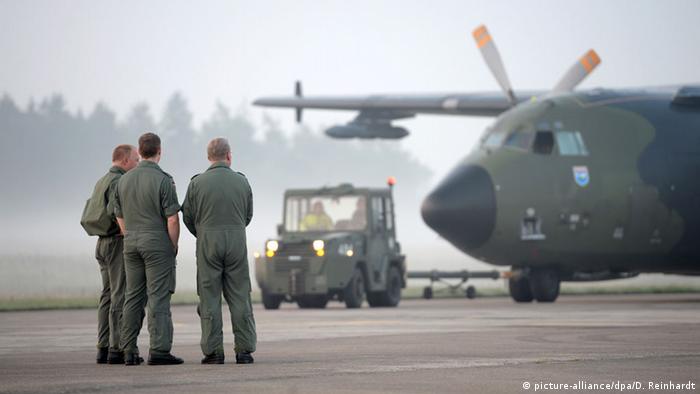 Access is via the loading platform. You take a seat on olive green canvas, wedged between containers and military equipment. With a roar, the two propellers begin to turn; the vibration rattles the entire interior of the Transall C-160.

The plane looks like a dinosaur of flight history. In fact, it's older than most of the soldiers it transports. The plane, developed by the German-French consortium Transporter Alliance, lifted off for the first time in 1963.

Back then, its engineers couldn't have guessed that the Transall would still be flying half a century later. The old "work horse" often faces technical problems. Sometimes, German Air Force officers are forced to quickly board a Lufthansa plane because their C-160 was cancelled. A defective Transall delayed the German military instructors' flight to the Kurdish areas in northern Iraq. The soldiers were forced to take another plane that, initially, had no flight permit for Iraq.

According to media reports, no more than 20 to 25 of the 57 Transall planes are fully fit for service. The material is worn out, and despite numerous refittings, the technology is antiquated and frail. Some spare parts can only be cannibalized from planes that are already completely out of service.

"Insufficient air transport capacities still strain the transfer of troops on a mission," said Hellmut Königshaus, the parliamentary commissioner for the armed forces, in his 2013 annual report.

Beyond the transport of German troops, Berlin often volunteers the Transall to transport supplies for international missions, like the current airlift to help the nations hit by the Ebola outbreak. But the aging plane doesn't always take off reliably, and it can only fly 1,200 kilometers (745 miles) when it's loaded to full capacity. Germany is not well equipped for distant missions on other continents.

And it's not just the Transall. The German military's entire inventory of aircraft is rife with inadequacies. The transport helicopter NH90 and the navy helicopter Sea King are in the shop more than they're in the air. 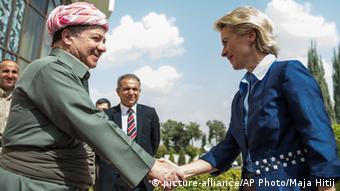 Ursula von der Leyen in Iraq, where Germany is equipping the Kurds with weapons

For troops on deployment, these technical deficiencies make their missions more difficult. After tears were found in its tail, the Sea Lynx navy helicopter had to be grounded from the Atlanta anti-piracy mission off the coast of Somalia.

Defense Minister Ursula von der Leyen has spoken of a "period of upheaval" and "bottle-necks" due to repairs. Yet despite its inadequate equipment, the military can still perform reliably in almost any deployment, according to von der Leyen.

"In its 17 current deployments across the world, the military proves on a daily basis that it's highly capable," the defense minister said.

But experts in the Bundestag are concerned that the aging equipment will discourage highly qualified young people from joining the military, despite von der Leyen's high recruitment expectations.

Some parliamentarians are also frustrated with a lack of transparency in the Defense Ministry. Agnieszka Brugger, the Green Party's representative on the defense committee, complains that she learned about the Sea Lynx's problems months after the fact. Since the Euro Hawk disaster, parliament has pushed for more timely information on whether a weapons system will be cancelled or delayed.

The Defense Ministry didn't plan for the Transall to still be in service. But its successor, the Airbus A400M, has been delayed for years due to technical problems and arguments about its cost and features.

The German military has ordered 53 of the aircraft, which was jointly developed by several European nations. The four-engine turboprop plane has twice the range and payload capacity of the Transall.

In November, the military is supposed to receive the first A400Ms. But the Defense Ministry is skeptical that the transport aircraft will meet all of its requirements.

"We will take it apart, put it back together, look at everything and test its capabilities," said Jens Flosdorff, the spokesman for von der Leyen.

Only then will the government decide whether or not it actually accepts the aircraft. Until then, the Transall will remain in service.