Natalie Geisenberger won a third consecutive gold medal in Beijing - and her first as a mother. She spoke to DW about her changing priorities as she balances elite competition with motherhood. 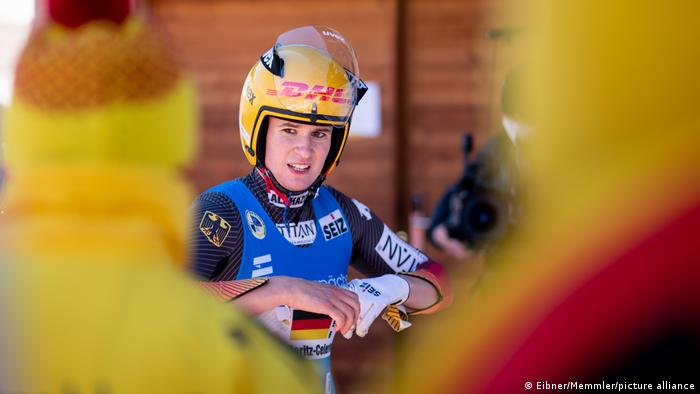 Natalie Geisenberger is one of the all-time greats in luge

For Natalie Geisenberger, the first race back was the acid test.

Six months earlier, she had given birth to her first child, Leo. Sat on her sled at the top of the hill, about to plummet down a luge track at speeds of up to 140 kilometers per hour, the 34-year-old German wondered if she would still be able to take the risks that had put her at the top of her sport.

"I had the first run and it was like, 'OK, let's see what will happen,'" Geisenberger told DW in a recent interview. "And the first run was, 'OK, that's a good feeling.' So, I'm not afraid or anything.

"It [becoming a mother] has changed something in my mind, yes. But it's not about being afraid, because then it would not be possible at this level."

Geisenberger's ability to jump right back on the sled without fear has paid off. Since returning to the luge circuit in 2020, after skipping a season due to her pregnancy, she has won an eighth World Cup title and claimed silver at the most recent World Championship.

On Tuesday, she was crowned Olympic champion for the third time in a row, edging out compatriots Anna Berreiter and Julia Taubitz, as well as tough competition from Austria's Madeleine Egle.

Having won all there is to win (she is also targeting gold in the team relay event), Geisenberger is clear where her priorities now lie.

"Maybe I'm not in the best performance of my life, because it's a different situation with a child," she said. "But I would never change my child. My little son is just my number one now. It's not the sport, it's just my son and my family."

Geisenberger was already her sport's most decorated female Olympian, but she has now joined a particularly rare club: that of gold medal-winning mothers.

However, the fact that they remain the exception rather than the rule suggests there is still more work to be done to help mothers return to competitive sport. At the Tokyo Games last year, several female athletes – among them, the US sprinter Allyson Felix – spoke out about the issue.

Felix has been involved in setting up a foundation that gives athlete mothers a share of $200,000 (€175,000) in grants. These are intended to help athletes with child care while they train and compete.

"It's a new situation, and there are some points you can maybe get better in the future," Geisenberger said when asked if she thought there was enough support for mothers. "You have to inform people and you have to talk a lot about it, and then things can maybe change."

"You have almost no mothers," added Geisenberger. "You just have fathers. Almost every woman is not a mother."

The double standard is not lost on the Munich-born star. Her good friend and fellow Olympic luge athlete Felix Loch is the father of two children. "There wouldn't be such a story written about men," Geisenberger bemoaned in an interview with German newspaper Süddeutsche Zeitung last year.

The pair has known each other since childhood, when they both raced their sleds down Bavarian hillsides, and Loch has nothing but praise for the five-time Olympic gold medalist.

"Natalie is really strong in her mind," Loch told DW. "She can concentrate on what's important. When it's a race, Natalie is always on it. I hope she will win."

And yet, there had been fears that Geisenberger wouldn't even make it to China to defend her Olympic title. At November's World Cup round in Beijing, which served as a test event for the Games, she had to spend several days in quarantine after being identified as a close contact of someone who tested positive for COVID-19.

"I really considered for a long time not to go to Beijing again because the experiences were so bad," Geisenberger said. Despite recording a number of negative tests, she was only allowed out of her room to train and struggled with the standard of food provided.

Since then, Geisenberger has spoken on the phone with International Olympic Committee (IOC) president Thomas Bach and other officials to address as much as she could ahead of time. China's human rights record also weighed on her mind, she said, but she decided to go because athletes "don't have a say" in where the Games are held.

"If I say I'm boycotting it, that I'm never going to fly again to China, then there'll just be another person on the results list and nothing will change," Geisenberger said. "I decided relatively quickly after the birth of my son that I wanted to start the Beijing project. To give up so close to that goal was not really a solution."

At most luge events, Geisenberger travels with her entire family – son, husband, father and even the dog – which she describes as "the best and only way."

Sadly for her, that isn't possible in Beijing. She is counting down the days until she sees them all again because she knows what is waiting for her back home in Germany is the most important thing.

"I know I was so successful at the Olympics. Nobody can take away my medals. They're just mine. And now I'm relaxed, because I've achieved everything in luge, and all my dreams have come true."