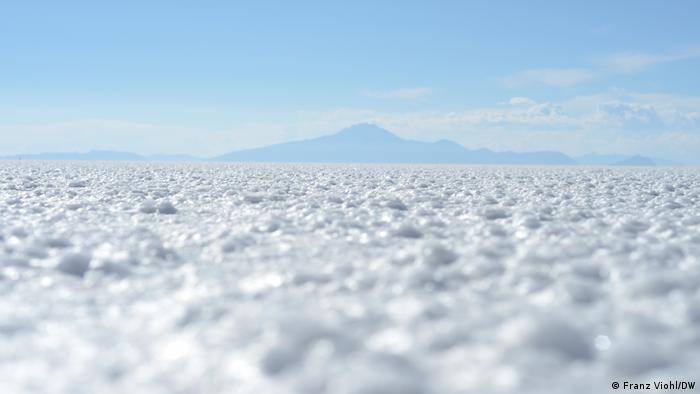 The glory days of the mines in Bolivia's Cerro Rico (Rich Mountain) region are long gone. The only ones left digging for the silver that gave the mountain its name are a few children from the nearby city of Potosi.

Situated on a cold and barren plateau at the foot of Cerro Rico, Potosi is a designated UNESCO World Heritage site and ranks as one of the world's highest cities at an altitude of 4,050 meters (13,290 feet). In its city center you can find a number of colonial-style buildings, including a museum of local history that depicts the plight of Bolivian miners past and present.

Centuries of mining for silver, tin and copper at Cerro Rico, however, have made only others rich, the locals say. They quip that the silver extracted by the country's former Spanish rulers alone would have been enough "to build a bridge from Bolivia to Europe." 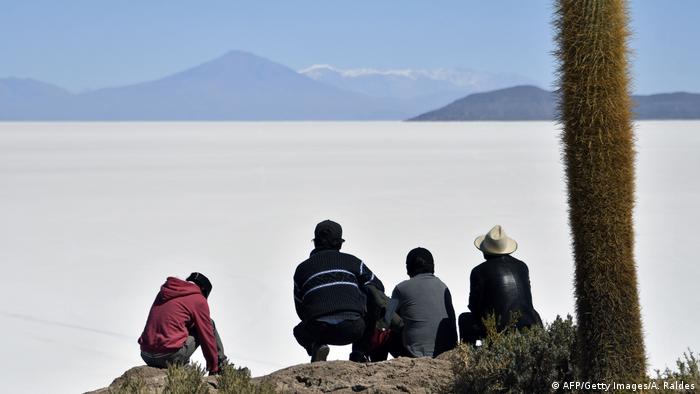 While Potosi's silver deposits are nearly exhausted, another treasure not far away has caught the attention of Bolivia's government and mining companies worldwide: lithium.

Underneath the Salar de Uyuni — the largest salt flat on earth stretching for over 10,000 square kilometers (3,900 square miles) — lies the world's largest single deposit of the raw material. The 20 million tons of lithium estimated to be won from the deposit are urgently needed to satisfy growing battery demand from electric carmakers worldwide.

On a sunny Friday in April 2018, Juan Carlos Montenegro came to the town of Uyuni to tell a crowd of locals gathered on the main plaza that the lithium treasure would be used for the benefit of all Bolivians. "The story of Potosi is not repeating itself," he told the people, most of whom were proudly wearing the traditional clothing of the Andean people.

That same day, the chief executive of Bolivian state-owned mining company YLB officially launched a mammoth project that was expected to produce 40,000 tons of lithium dioxide per year, and a group of German small and medium-sized companies was supposed to help Bolivia achieve that.

"The lithium will start an industrial era in our country," Montenegro boldly stated.

Two years after Montenegro visited Uyuni, the Bolivians are still waiting for the riches they were promised. The lithium project has been put on ice by former Bolivian president Evo Morales, who scrapped the contracts with the German investors in November 2019 following massive public protests. The local population and business leaders had demanded a fairer share of the lithium spoils.

Since then, the mining project has been simmering on the political backburner, as wrangling for the country's leadership, including Morales' flight into exile from which he returned just this week, plunged domestic politics into turmoil.

But the dust appears to be settling after leftist leader Luis Arce won the recent presidential election. The former economy minister in the Morales government seems willing to restart the project, including Bolivia's partnership with the Germans. 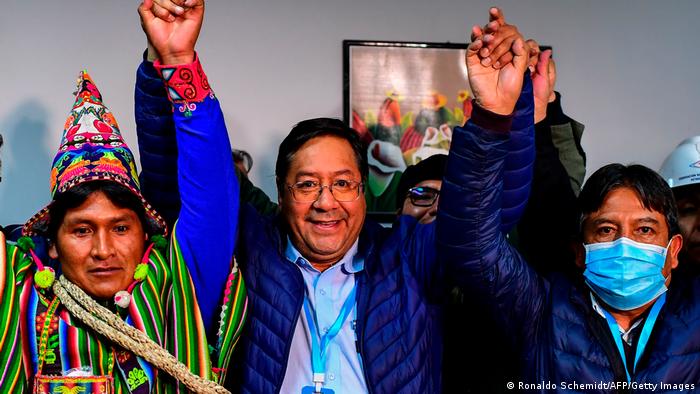 Will Luis Arce (center) restart the lithium project with German firms or with other investors offering Bolivia a better deal?

"If the German companies agree to adapt the terms [of the contract], we are ready to continue our collaboration," Arce told German newspaper Frankfurter Allgemeine Zeitung in an interview shortly after he had won the election.

Arce has gained the reputation of being a pragmatic politician. It was he who began opening up the Bolivian economy under the Morales presidency which helped foster an unprecedented economic boom. Aware of Bolivia's mineral wealth, he knows that its deposits can only be mined with the help of specialists from abroad.

Small wonder that the recent leadership change is raising hopes among the German companies involved in the lithium project that they can return to Bolivia as soon as possible.

Potash mining specialist K-Utec is a German firm that was supposed to deliver exploration equipment for the lithium mined at Uyuni. CEO Heiner Marx still believes the original agreement signed with the Morales government ensures the project is one "among equals."

"The terms we offered were highly interesting for the government because they respect both social and environmental aspects. They also guarantee that important parts of the value chain will remain in the region," he told DW.

K-Utec's plans for Uyuni included a fertilizer plant that would use the residues of lithium mining, as well as vocational training for locals working in the company's operations. The company also wanted to set up a solar power plant to cover the lithium factories' electricity needs with renewable energy. 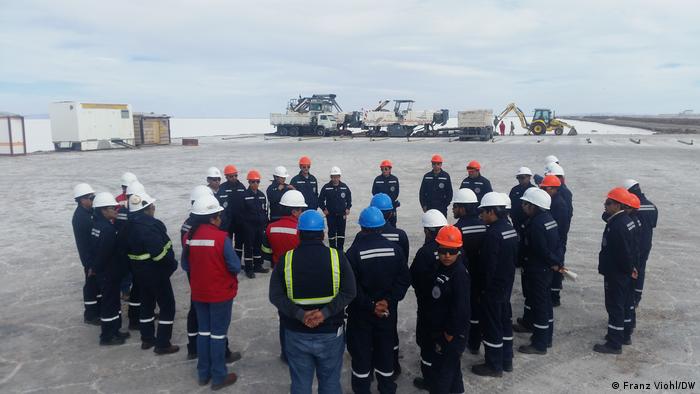 Marx argues the project would be "a blessing for Bolivia," but admits at the same time that taxes in neighboring Chile and Argentina, where K-Utec also operates lithium mines, are "significantly higher."

Yet after "two lost years," Marx says there is still a strong interest among German investors to forge an agreement, and adds that apart from his own company the entire German industry is eagerly waiting for a breakthrough.

And indeed, the lithium from Bolivia is crucially important for Germany, notably the country's carmakers, including VW, Daimler and BMW, which are dependent on a steady supply of lithium for a planned expansion of their battery production.

Europe's auto industry is under immense pressure to roll out more electric vehicles in order to meet stringent CO2 emission targets for their fleets imposed by the EU.

Under the original agreement, German investors were planning to invest €1.2 billion ($1.4 billion) in the Uyuni lithium project. A joint venture was supposed to be established, giving Bolivia's YLB 51% of the shares, while German project developer ACISA and K-Utec would jointly hold a 49% stake. Lithium dioxide production was expected to begin in 2022 with an annual capacity of more than 10,000 tons. The agreement was scheduled to last about 70 years. 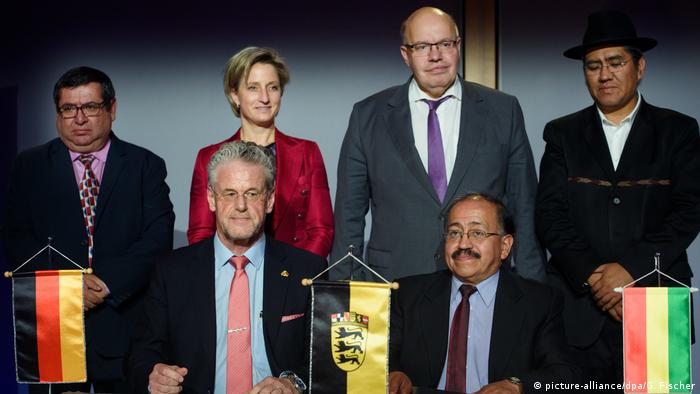 In 2018, the German investors thought they had landed a big deal as the joint venture was backed by both governments

Despite the setback two years ago, commodity market experts now see a good opportunity for restarting the lithium partnership if the German companies improve their offer.

"It's understandable that countries like Bolivia seek to retain a larger part of the value chain because it's a trend that's been manifesting itself across commodity markets worldwide," says Michael Schmidt from German market watchdog Deutsche Rohstoffagentur (German Raw Materials Agency DERA).

DERA has estimated that Germany's lithium demand could multiply over the next five years to about 31,000 tons annually. China's battery maker CATL alone, Schmidt told DW, would need 12,700 tons for its planned cell production facility in the eastern German city of Erfurt, Germany.

Although the German Economy Ministry has been supporting the Bolivian project, it's refusing to step into the fray over the terms of a new contract.

Upon DW's request for comment, the ministry said in a statement that it had made it quite clear from the beginning that concerns for the project's environmental sustainability and Bolivia's demand for a larger share of the value chain must be given "high priority."

Bolivia's YLB has failed to reply to several requests for comment from DW.

K-Utec CEO Heiner Marx, meanwhile, has approached the Bishop of Potosi to find out what his company can do to give the locals in the Bolivian mining region a better deal financially. He told DW that he continued to believe in the project and was hopeful that German companies would clinch a new deal "in the coming weeks."