Protesting Bolivian miners from Potosi have clashed with police in the capital, La Paz. The miners are calling on the government to make good on promises for public works and job creation in the southern, Andean region. 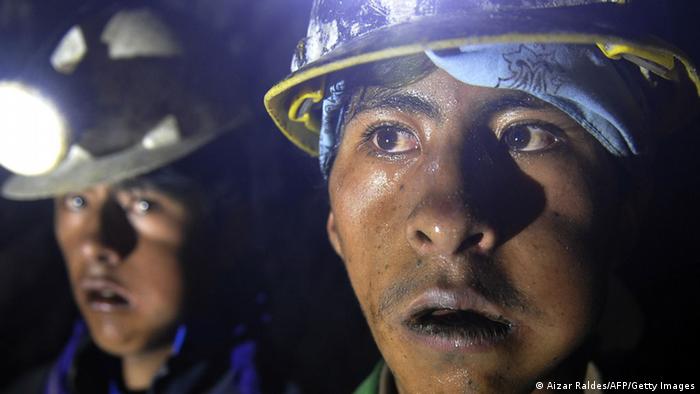 The striking miners from the southern, regional department of Potosi threw rocks at the windows of the Ministry of Government during their protest in the capital, La Paz on Wednesday.

After police used tear gas, the miners tossed small dynamite charges towards them. There were at least 44 arrests and one police officer was injured.

A fire broke out in pine trees at the German Embassy, next door to the Ministry building, but it was quickly put out. Vice President Alvaro Garcia Linera said it had been caused by the charges thrown by the miners.

One of the protest organizers, Milton Navarro, said: "We are hungry. But this is not the fault of the civic committees who have reunited here in La Paz in hope of an answer for our demands. The only person to blame here is President Evo Morales. Why is he afraid to have a dialogue? He does not have the capacity to have a dialogue?"

Other protesters from Potosi, 553 kilometers from La Paz, marched to show their support for the civic committee which is trying to negotiate an end to the general strike which has been going on for 16 days.

Potosi depends on mining and residents have been badly affected by the drop in mineral prices. They are demanding the central government funds a better hospital, an improved airport and a cement factory among other projects to boost the economy.

The city of Potosi at 4,090 meters above sea level in the Andes mountains lies at the foot of the Cerro Rico, the mountain which was the main source of silver for Spain during the colonial period. Potosi was the location of the Spanish colonial mint.

Pope Francis has used an open-air mass in Bolivia to call on people to reject modern consumer society, saying it demeans people's worth. The pope is currently halfway through a pilgrimage taking him around South America. (09.07.2015)

Canada: Most espionage since Cold War amid pandemic 4h ago