The Bolivian government aims to pump massive investments to expand the country's production of lithium, a metal needed for the batteries that power everything from smartphones and laptops to hybrid and electric cars. 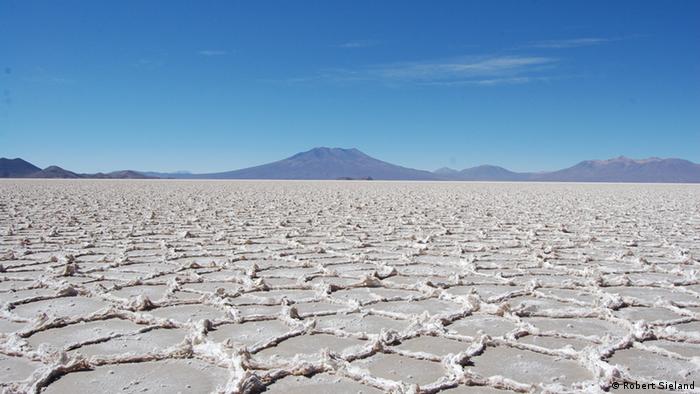 In a future battery-powered world, lithium may replace oil and emerge as one of the most important commodities on earth. That prospect is driving Bolivia, which is considered to have the largest reserves of the metal, to keep lithium under strict state control.

Bolivian President Evo Morales sees a prosperous future for his currently impoverished South American nation, pinning his hopes on the rapid rise in the global price of this valuable resource. "We will develop a huge lithium industry, over $800 million have already been made available," Morales told the German DPA news agency.

Lithium, the lightest of all metals, is the key ingredient in lithium-ion batteries, which are currently the best available technology for powering a range of products, including mobile phones and e-cars.

Lithium-ion battery production is forecast to double to eight billion cells by 2025. And the world price for lithium carbonate has almost doubled in a short span of time to about $13,000 per ton. This has pushed a number of firms across the world to try to get hold of lithium supplies.

Bolivia from space: satellite images of a changing ecosystem

Salt flats in the highlands of Bolivia are thought to hold millions of tons of untapped lithium reserves. According to the US Geological Survey, the Salar de Uyuni salt flats in the country alone contain nine million tons of lithium, over a quarter of the world's known reserves. In total, Bolivia is estimated to possess about half of the world's lithium.

This has prompted some observers to even suggest that Bolivia could become "the Saudi Arabia of lithium."

That means if the world shifts to electric cars and causes a spike in demand for lithium, then Bolivia's enormous reserves could provide a major windfall for the country, allowing it to generate wealth and spread prosperity among its destitute population.

But for now, Bolivia remains a minor player in the global lithium economy, while its neighbors like Chile and Argentina dominate the market, although those countries possess smaller reserves of the resource.

A mining complex to extract lithium and potassium chloride is currently being run on a 40 square kilometers area in Bolivia's Salar de Uyuni salt flats. The government says it's only a pilot project and underlines that it intends to spend hundreds of millions of euros on lithium mining and processing capacity development. Its plan foresees lithium carbonate production beginning in 2020. 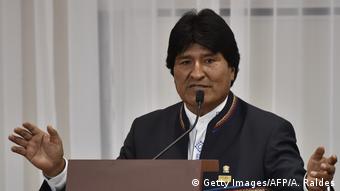 Still, Bolivia has to overcome an array of daunting challenges to realize its aim of developing a whole lithium industry.

The government says it doesn't want the nation to be a mere exporter of raw material, but rather wants to transform it into a hub where the entire chain of value-added activities involving lithium takes place. That includes, for instance, building of battery plants and car factories in Bolivia, which it hopes creates employment and wealth for Bolivians.

Another issue concerns the purity of lithium extracted. Bolivia's reserves are held to be relatively impure as they have higher levels of magnesium than in the metal found in other countries. The nation's salt flats are also subject to seasonal flooding, resulting in a lower evaporation rate and making it more expensive and difficult to refine.

Bolivian President Evo Morales has agreed to run for re-election in 2019, defying a referendum that confirmed the legal limit of two consecutive terms. Party officials have suggested several ways to bypass the rule. (18.12.2016)

Authorities in Bolivia have intercepted a truck carrying 7.5 tons of cocaine bound to the US, officials said. The truck's driver was released after police determined he did not know the content of the shipment. (02.08.2016)

Evo Morales has governed Bolivia for over a decade and his term is set to expire in 2020. A referendum is being held to allow Morales to run for another term. DW's Jan D. Walter reports on the president's standing. (19.02.2016)

Opinion: In Bolivia, a referendum that tests democracy

Even if he could still win - the narrow outcome of the referendum in Bolivia is a defeat for president Evo Morales. And the handling of the result will be a litmus test for the country's democracy, writes Uta Thofern. (22.02.2016)

Bolivia's Senate has voted to nearly double the amount of land allotted to legal coca cultivation. That could bring the South American nation's expected production to up to 30,000 tons of leaves. (25.02.2017)

Bolivia's shabby physical infrastructure also poses a hindrance. And the country is attempting to scale up the building of roads, ports and electricity as well as communications lines to bring its infrastructure on par with that existing in nations like Chile.

The medium-term prospects for lithium mining and processing may also depend on whether lithium-ion batteries remain the leading energy storage technology for cars, smartphones and other mobile devices.

Electric vehicle energy storage is a technology that remains a long way from maturity. It's entirely possible that even more efficient or cost-effective on-board energy storage technologies, not based on lithium, could emerge in coming years.

Investor confidence in the Bolivian government is another issue negatively affecting Morales administration's plans for creating a full-fledged lithium industry.

Elected in 2006, Morales is Bolivia's first indigenous leader and has become the longest-serving president since the country became independent in 1825. But multinational corporations view Morales with suspicion given his left-wing credentials and harbor fears that their assets could be nationalized by the government at a whim.

Nevertheless, Bolivia has posted some of the highest growth rates in the region under Morales' presidency. He has also been credited for using profits from the country's gas exports to modernize the economy and for being the most fiscally prudent leaders in the region.

While some fear that lithium production in the salt flats degrades the environment, others point out that the evaporation process used to extract lithium is less polluting than other forms of mining. Still, experts warn the region's sensitive ecology could be severely impacted by any large-scale mining project.

After a marathon contest for the leadership of the ruling CDU, its most powerful state premier, Armin Laschet, prevailed at the finish. Whether he wants to — or indeed can — strive for the chancellery remains to be seen.