Lufthansa is seeking a €10 billion bailout that would give the German government a massive stake in the airline, Der Spiegel reports. The German flag carrier has said it is losing €1 million an hour due to the pandemic. 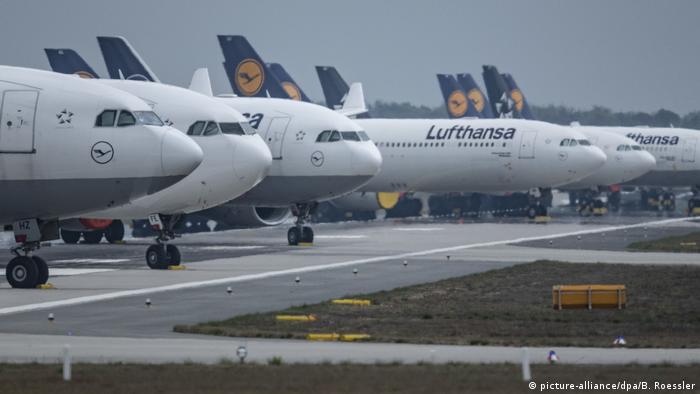 German national carrier Lufthansa is seeking a €10 billion ($11 billion) bailout that would give the German government a 25.1% stake in the company, German weekly Der Spiegel reported Friday.

According to the news magazine, the government will hold over half of the stake — €5.5 billion — as a silent partner, for which they will receive a guaranteed return of 9%.

The state-owned development bank Kreditanstalt for Wiederaufbau (KFW) will also contribute another €3.5 billion, backed by the German government.

Loans amounting to €6 billion are also expected from Austria, Germany, and Switzerland.

The airline had announced last week that it was in "intense negotiations" with various European governments to receive financial support.

Lufthansa and Germany's finance ministry have yet to comment on the plan, though Finance Minister Olaf Scholz told German daily the Passauer Neue Presse that "taxpayers can count on us not to conduct these talks naively."

Lufthansa is currently flying around 1% of its normal flight schedule.

CEO Carsten Spohr has said that continued fixed costs, like interest payments and existing fuel contracts, mean Lufthansa is losing around €1 million in cash per hour.

Responding to the news of the impending bailout, the CEO of low-cost air carrier Ryanair, who on Friday announced the company would be laying off 15% of its workforce as a cost-cutting measure, maligned the fact that rival airlines are receiving billions in state aid.

"Pricing is going to be grim. the competitive environment is going to be grim, I think for the next two or three years," Chief Executive Michael O'Leary said. "We are going to be competing now with airlines that have received gargantuan sums of state aid and will be able to keep going forever regardless of any kind of economics."

Boeing, battered even before coronavirus, restarts in survival mode

The world's biggest aircraft manufacturer stands on the precipice. This week production is starting up again, but Boeing faces huge challenges and uncertainty. (21.04.2020)

Global air traffic has been declining rapidly during the coronavirus scare. The drop affects all regions. It's down by almost 100% in southern Africa. That's something never seen before, Andreas Spaeth reports. (01.04.2020)

Ryanair used to advertise a price that would then rise in the later stages of the booking process due to additional fees. An EU court has ruled in favor of Italian authorities who said the practice was incorrect. (23.04.2020)