Interior Minister Horst Seehofer has said he's considering resigning from German Chancellor Angela Merkel's Cabinet and as CSU leader. DW takes a look at what the move would mean for Merkel and her government. 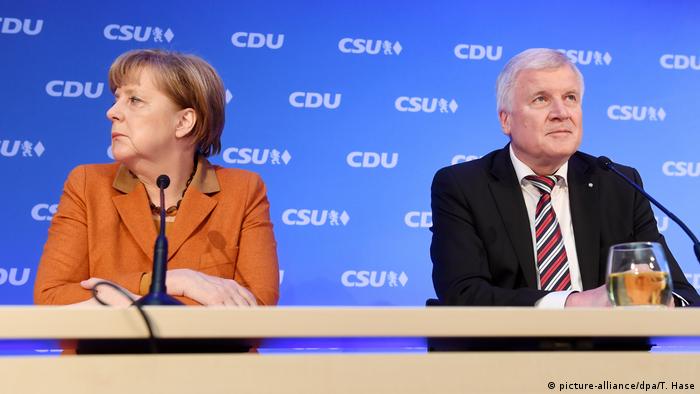 German Interior Minister Horst Seehofer's surprise announcement that he's considering resigning from his cabinet post  as well as his position as the head of the Bavarian Christian Social Union (CSU) has sent shockwaves through German politics.

As he enters into last-ditch talks with Chancellor Angela Merkel and her Christian Democrats (CDU) over Germany's asylum policy, DW breaks down the consequences his resignation would have for Merkel and the ruling coalition between the CDU, the CSU and the center-left Social Democrats (SPD).

How does resignation work?

Germany's Basic Law (constitution) doesn't make a distinction between voluntary resignation and dismissal for federal ministers, meaning that Seehofer must ask Merkel to be dismissed.

Should Seehofer ask to be dismissed, Merkel cannot make the call by herself. She would need to propose the move to German President Frank-Walter Steinmeier, who would then be the one to dismiss Seehofer from his interior minister post.

What could the CSU do if he leaves?

Should Seehofer decide to leave his post, his Bavarian party would then need to propose a new candidate from their ranks to be the next interior minister.

If, however, the party no longer wants to stay in the governing coalition, they could also pull all of their ministers out of Merkel's cabinet, thereby ending the government's majority in the Bundestag, Germany's lower house of parliament.

What happens to Merkel's government?

Should the CSU decide to nominate a replacement for Seehofer, Merkel's coalition would continue to remain in power, although the chancellor would have to contend with even further strained ties between the conservative allies.

If the CSU no longer wants to stay in the coalition, there are several possible scenarios, none of which look particularly promising for Merkel:

Merkel's CDU — and the SPD, if they agree to it — could attempt to continue ruling without a majority in parliament, but they would need to continually seek partners in the opposition in order to pass legislation, as a majority is required. During the lengthy talks to form the current coalition, Merkel said she'd rather call for a new election than opt for a minority government, meaning she won't likely be keen on taking this route.

The CDU and the SPD could also start searching for a new coalition partner to fill the gap left by the CSU. They could possibly strike a deal with either the business-friendly Free Democrats (FDP) or the environmentalist Greens. However, Merkel's position as chancellor would likely be up for grabs during negotiations.

The technically legal but unlikely third option could see Merkel facing a vote of no confidence in the Bundestag. Should the CSU abandon the CDU, there would technically be a majority in parliament against the chancellor. However, the other parties would need to also simultaneously propose a new candidate — an unlikely option considering the divides between them.

Should Merkel's government break down, this could pave the way for the dissolution of parliament and new elections in Germany. The process to call for new elections is complicated, but it's an option that Merkel previously said she prefers to ruling in a minority government. Should President Steinmeier decide to dissolve parliament, a new election would have to take place within 60 days.

Germany's interior minister said he knows it's hard to believe, but he isn't aiming to bring down the government he's part of. But he hinted he may resign if he doesn't get what he wants when it comes to migration. (28.06.2018)