A German man who took part in a gay rights conference has been hospitalized with life-threatening injuries after he was attacked in central Belgrade. The assault comes ahead of a scheduled gay pride march in the city. 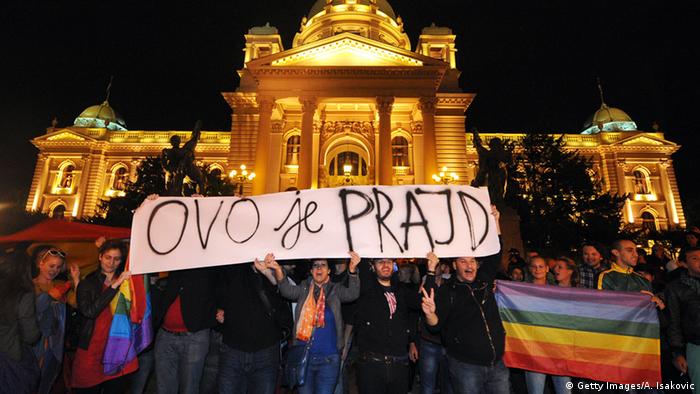 Gay rights activists hold a banner reading 'This is pride' as they demonstrate in front of the Serbian Parliament on September 27, 2013

Serbian police say the man, who has been identified only as D.H., was beaten up by unknown assailants in downtown Belgrade early on Saturday morning.

Jovanka Todorovic, from the organization Labris which hosted the conference on LGBT (lesbian, gay, bisexual and transsexual) rights, told Associated Press the man was attacked by a group of young men who bashed him with a glass ashtray.

"He has undergone surgery and been put in intensive care as his condition is very serious," Dusan Jovanovic, the hospital's deputy director, told news agency AFP.

Serbia's Interior Minister Nebojsa Stefanovic said in a statement that he had ordered an "intensive investigation" to bring the perpetrators to justice.

"We will not allow these kinds of things to remain unpunished ... and we will arrest the German citizen's attackers," he said.

The incident is not unique in Serbia. The country has a long history of violence against gay rights campaigners by far-right groups - a serious challenge for the government, which is currently seeking EU membership and has pledged to improve its protection of human rights.

Later on Saturday, anti-riot police were on hand as hundreds of gay rights activists marched through central Belgrade in protest of the latest attack.

The gay pride parade is scheduled to take place in two weeks and will be the first event of its kind since a gay pride march in 2010 resulted in clashes between police and ultra-nationalists that left more than 100 people injured.

After clashes in 2010, authorities banned such marches, citing security concerns that participants may be attacked by right-wing extremists.

Serbian activists have condemned the banning of a gay pride event as a huge blow for human rights. The parade, due to take place this weekend, was cancelled amid fears that counter protests could turn violent. (30.09.2011)

Masses of people have marched through Istanbul to support gay rights. The pride parade has been billed as the Muslim world’s largest, this time taking on special significance after a year of anti-government protests. (29.06.2014)