Masses of people have marched through Istanbul to support gay rights. The pride parade has been billed as the Muslim world’s largest, this time taking on special significance after a year of anti-government protests. 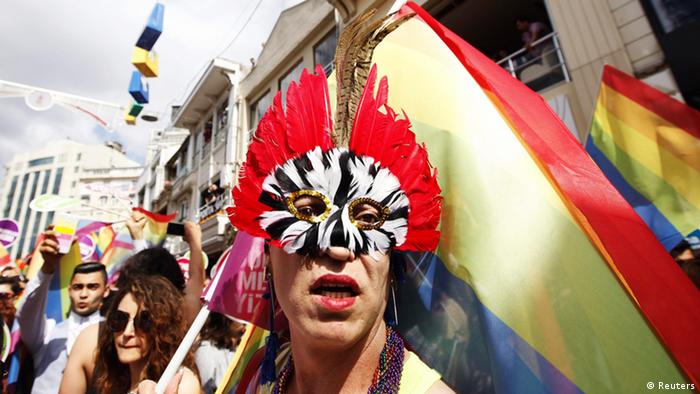 Turkey's LGBT (lesbian, gay, bisexual, transgender) community turned out in droves on Istanbul's main pedestrian street, Istiklal Avenue, for this year's gay pride parade. Police were on the scene to intervene in the event of violence, but the march remained peaceful.

Participants waved rainbow flags and carried signs calling for an end to homophobia in the Muslim country. "Love knows no gender," "Another kind of family is possible," and "Stop homophobia," some of the signs read.

"In Turkey, we all have difficulty exercising our rights," one participant, identified by AFP news agency as Aykut Yanak, said. "This is why we must fight and why we all walk together today."

Homosexuality is not illegal in Turkey. However, homophobia remains firmly in place among the Middle Eastern country's deeply conservative population.

In 2010, Prime Minister Recep Tayyip Erdogan's Minister for Family and Women, Selma Aliye Kavaf, called it a "disease" that "needs to be treated."

The parade drew criticism from Islamists on Twitter on Sunday, according to news agency DPA. They reportedly took issue with both the fact that the government allowed the LGBT community to hold its event and that the parade coincided with the start of the Muslim holy month of Ramadan.

Istanbul has seen a sharp increase in mass protests within the past year, first sparked last summer by violent crackdowns on anti-government demonstrators. The sharp backlash from the government against the public angered many across Turkey, who then took to the streets in protest against the prime minister's heavy-handed rule.