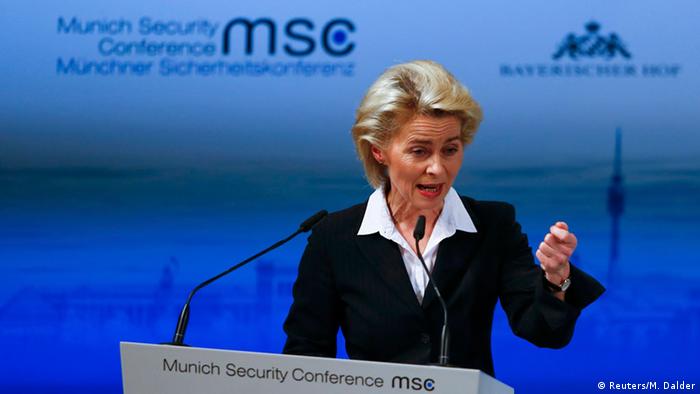 One day after NATO, pushed by Germany, Greece and Turkey, kicked off an unprecedented naval mission targeting human traffickers in the Aegean sea with the goal of reducing the number of refugees, the German and French defense ministers took to the stage in Munich.

What they said in back-to-back speeches showed that Paris and Berlin have different concerns regarding the Syrian conflict and the refugee crisis. In her remarks in Munich, German Defense Minister Ursula von der Leyen (pictured above) introduced a new initiative whereby Germany's military, the Bundeswehr, could train Syrian refugees in civilian jobs.

Once the Syrian conflict ended those refugees could then go back and help with their newly learned skills to rebuild the country. The German military, she added, was already experienced in providing training for more than 100 jobs. This knowledge could be harnessed to help first the Syrian refugees and later Syria itself, von der Leyen said. 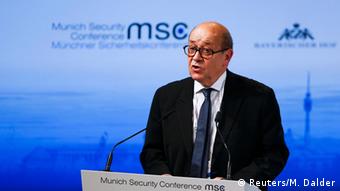 The French minister called out both 'IS' and the Assad regime. The first he labeled a "nightmare"; the latter he accused of cooperating and enabling Islamic extremists. The Syrian city of Raqqa and Iraq's Mosul, both held by 'IS', needed to be liberated very quickly,' urged Le Drian, who also called for a global strategy against the group.

He also took aim at Moscow, saying that the peace deal reached in Munich could only work once Russia halts its indiscriminate bombing campaign in the country.

Le Drian also took a shot at Washington and its reduced role in the Syrian conflict. Strategic patience, a concept favored by the Obama administration, should not lead to complacency, he warned.

To be sure, the German and French defense chiefs both stressed how close both countries cooperate; for instance, on intelligence sharing, and how important the Franco-German alliance is. But when it comes to the current crisis, judging from the priorities exhibited in their Munich speeches, they have very different agendas.


Viewers can watch the conference online through this link.

Leaders from 30 countries have arrived in Munich to attend the annual security summit. The conflict in Syria and Russia's role - both in the war and in the Ukraine crisis - are topping the agenda this year. (12.02.2016)

Nearly 200 IT and cybersecurity experts met ahead of the Munich Security Conference. The issue at hand: the dangers of a networked world are increasing with speed and there's no simple solution in sight. (12.02.2016)