Foreign Minister Guido Westerwelle has called on all EU states to accept Kosovo's independence on the last day of his tour of the Balkans. He also urged Bosnians to stand united to boost their chances of EU membership. 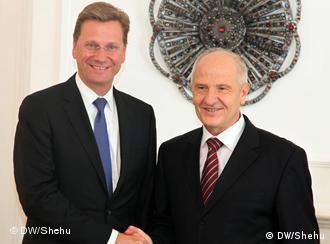 Germany is one of Kosovo's chief allies

German Foreign Minister Guido Westerwelle has reinforced Germany's stance on Kosovo's independence on the last leg of his Balkan tour in Pristina on Friday, calling on all EU states to accept the status of the former Serbian province, which Serbia still regards as part of its territory.

"There is concern in several countries ... that the recognition of Kosovo could mean something for other conflicts in other states," Westerwelle said. "This is not the case."

Kosovo has been recognized as an independent state by 69 countries, including 22 in the EU. Cyprus, Spain, Greece, Slovakia and Romania - all of which are grappling with rebellious domestic groups - have refused to accept its independence.

"The recognition of Kosovo is a case of sui generis," Westerwelle said "Twenty-two states have decided as Germany did. Five others are hesitating. I ask them after the clear decision of the court: Follow the majority in the European Union." 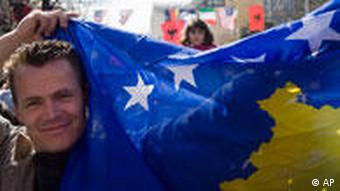 Kosovo declared independence from Serbia in 2008

Westerwelle was referring to the July ruling of the International Court of Justice (ICJ) that declared Kosovo's independence in line with international law.

Westerwelle also discussed the matter with Serbian leaders during his visit to Belgrade on Thursday. He stressed that dialogue with Kosovo is one of the prerequisites for Serbia becoming a member of the European Union.

"One chance, not several"

Earlier on Friday, Westerwelle urged Bosnian leaders to work towards unifying their country, if Bosnia-Herzegovina is to have a chance of joining the EU.

"Bosnia's future is in Europe, but the road to Europe involves striving for unity and consensus," he said in Sarajevo. "Bosnia-Herzegovina only has one European future, not several."

The country is divided between the Muslim-Croat federation and the mainly Serb Republika Srpska. Since the 1995 Dayton Peace Accord, which ended the country's three-year civil war, the two entities have had their own administrations linked by a weak central government.

Bosnian Serb Prime Minister Milorad Dodik said this week that he believed the Bosnian Serbs would eventually secede. He did not turn up for a planned meeting with Westerwelle on Thursday.

Westerwelle warned against a split, saying that the Balkan country should press ahead with political and economic reforms after elections on October 3.

After two and half years of independence, Kosovo remains a divided country. Most minority Serbs reject the secession from Serbia. Corruption is rife and critics doubt the government's resolve to tackle it. (16.08.2010)