Westerwelle warns Serbia on Kosovo stance | Germany| News and in-depth reporting from Berlin and beyond | DW | 26.08.2010

Speaking in Serbia, German Foreign Minister Guido Westerwelle has said the future of the Balkans is as part of the EU. He said Serbia, however, would have to "come to terms" with the loss of Kosovo as a province. 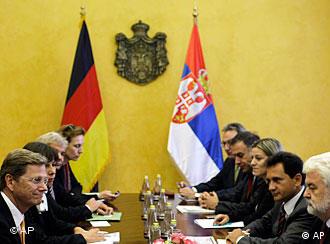 Westerwelle wants Serbia to be more "cooperative" on Kosovo

German Foreign Minister Guido Westerwelle urged Serbia on Thursday to drop its challenges to Kosovo's independence and instead focus its energy on joining the European Union.

"In our view, one can only be a member of the European Union if one aims for cooperation and is prepared to resolve neighborly difficulties cooperatively," he told reporters in Belgrade.

Westerwelle used his first visit to Serbia to meet with Prime Minister Mirko Cvetkovic, President Boris Tadic and opposition leaders. He expressed his disagreement with a recent resolution against the secession of Kosovo presented by the country to the United Nations General Assembly.

"The independence of Kosovo is a reality," Westerwelle said in a speech at the University of Belgrade. "Reconciliation is only possible when one grasps the reality."

Germany has joined 68 other countries in recognizing Kosovo's independence, but Serbia adamantly opposes it.

In July, the International Court of Justice found Kosovo's secession was in line with international law. Serbia rejected the ruling and instead is pressing the UN to restart talks on the state's status. 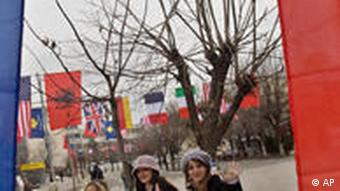 Kosovo's independence has been a highly controversial subject

Westerwelle said the EU would be willing to broker direct talks between Serbia and Kosovo to resolve the dispute and questioned Serbia's choice to take the issue to the UN instead.

"When someone in Europe wants to solve something including conflicts […] the road should first lead to Brussels, not to New York," he said.

On to Bosnia, Kosovo

Later Thursday, Westerwelle is to visit the Bosnian capital, Sarajevo, where proposed political reforms have long been stalled. Parliamentary and presidential elections are scheduled for October.

Western powers hope the results will shift the politics away from ethnic divisions and toward a more unified country. But with two rival autonomous regions, the mainly Muslim and Croat Federation of Bosnia and Herzegovina and Serb-majority Republika Srpska, Bosnia and Herzegovina is the most politically unstable of the former Yugoslav republics.

Westerwelle began his tour in Croatia on Wednesday, where he provided an optimistic outlook for the country's prospects of joining the EU. He continues to Kosovo on Friday, where he is to visit the 1,400-strong German contingent of KFOR, NATO's peacekeeping force in Kosovo.

Germany's Foreign Minister Guido Westerwelle kicks off a tour of the Balkans in Croatia, a country eager to join the European Union. Westerwelle had words of encouragement but said accession rules would remain firm. (25.08.2010)

The legitimacy of Kosovar independence won out in last month's trial at the International Court of Justice, but uniting the country under one flag - and government - is proving a difficult task. (16.08.2010)