Heiko Maas gave a cheque for €1 million to the Lebanese Red Cross upon arrival in Beirut a week after the city's devastating blast. He said Germany is on hand to invest, but needs assurances of "good governance." 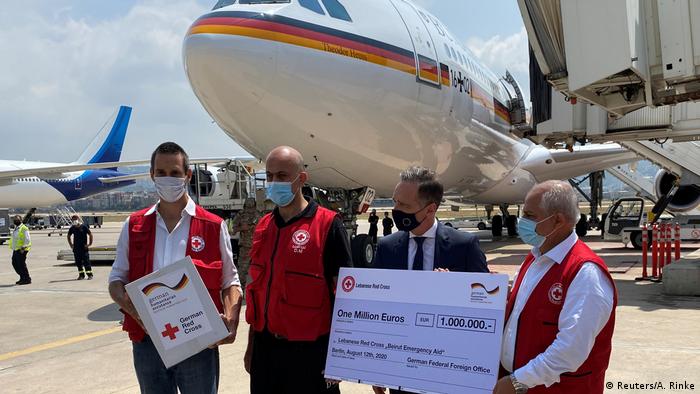 Upon arrival at the airport, Maas handed over the first part of Germany's immediate aid package totaling €20 million ($23.5 million). The cheque for €1 million to the Lebanese Red Cross was intended to help families affected by the blast.

"With the United Nations, we want to take our aid quickly to Beirut and give it directly to the people through experienced aid organizations," Maas said, adding that he would be talking with such organizations on the ground in Beirut.

"It is something else to see with your own eyes what happened here a few days ago in Beirut, the level of devastation and destruction is almost unimaginable for people living in Germany," the foreign minister continued. "Now it is a matter of continuing to help ensure that the destruction can be re-built piece by piece."

Maas said Germany is willing to invest in the Middle Eastern country, but on condition of radical economic reforms.

"It is impossible that things go on as before," Maas said. "The international community is ready to invest but needs securities for these investments. It is important to have a government that fights the corruption."

"Many in Europe have a lot of interest for this country. They want to know that there are economic reforms and good governance," he added.

The Lebanese government resigned on Monday amid mass protests at corruption and incompetence that have been further highlighted by last week's disaster. The country had already been seeing a wave of demonstrations amid a financial crisis.

An international donor conference on Sunday raised about €250 million in aid money that has been made contingent on political reforms in Lebanon, which remains riven by sectarian divisions 30 years after a civil war devastated the country.

The explosion last Tuesday was caused by large amounts of ammonium nitrate that had been stored for years in warehouses at the port. The conditions under which the highly explosive substance was kept point to crass negligence on the part of authorities.