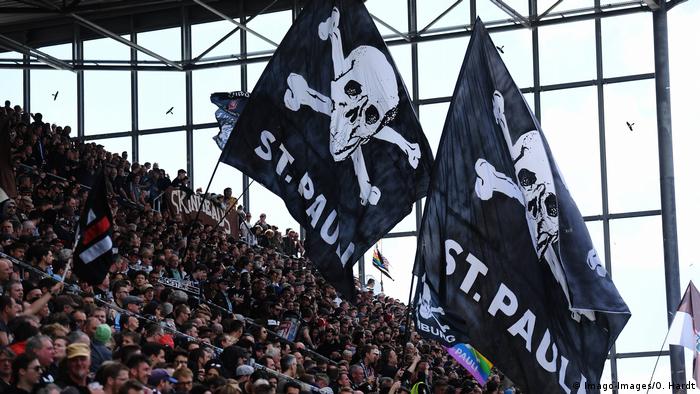 The skull and crossbones emblem belonging to St. Pauli is a much more common sight around the world than you'd expect of a club that has spent most of its recent history in Germany's lower leagues.

The reason for that lies largely in the club's social and political activism. The Hamburg-based outfit are renowned for having a left-leaning, anti-fascist following and have expressed support for the plight of Kurds in the Middle East, held banners welcoming refugees, and been involved with confrontations with neo-Nazis and hooligans at away games on a number of occasions. Such stances have won them a cult following and a number of engaged international fan groups who often run projects to support refugees and others struggling in their local areas.

Several of those groups are in the UK, where football's fan culture has broadly moved away from social activism towards more commercial goals. As a result, a huge number of St. Pauli fans around the world were surprised to see their club's symbol deemed such a threat to the security of Britons that teachers, doctors and nurses needed to be made aware of it as part of a UK Counter Terrorism Police document distributed widely last week.

"Our initial reaction was one of shock, then we understood more about the document and it became a feeling of hilarity," the Manchester St. Pauli fan group told DW. "The fact a second division team in Germany can have such an impact that British Security Forces recognize it is something we should be proud of."

The 24-page document, which was presented in public sector briefings last summer, was uncovered by British newspaper The Guardian. It also listed Greenpeace, Stop the Badger Cull and Extinction Rebellion along with images of a swastika and emblems representing jihadi groups and the National Front.

A club spokesperson told DW that St. Pauli's presence on such a list was wholly unexpected and said they have contacted UK police to try and find out why they were deemed a threat. DW have also contacted the police with questions but so far there has been no response.

However, Deputy Assistant Commissioner Dean Haydon, senior national coordinator for the UK's Counter Terrorism Policing, has released a statement saying the presence of "legitimate protest groups" on the list was to "help police and close partners identify and understand signs and symbols they may encounter in their day-to-day working lives, so they know the difference between the symbols for the many groups they might come across."

While the German club were not mentioned by name, Haydon said: "We don’t consider those groups to be extremist, we do not consider them to be a threat to national security."

Though St. Pauli will not release a statement until they have heard from the police, they retweeted a message of support from on-loan Welsh defender James Lawrence which expressed his pride in supporting the club's values.

Those sentiments were also shared by Manchester St. Pauli. "UK fans continue to be drawn to St. Pauli because of the values the club hold dear, that our fans have shaped the attitudes of the club," their statement to DW read. "There is nowhere in Britain where you can be that open about your views, and know the person next to you shares them, and the club will defend your right to say them."

The Turkish national team's use of a military salute by has been heavily criticized in wake of Ankara's military offensive against Kurds. In Germany, several players of Turkish origin have been caught up in the furore. (15.10.2019)

The fullback was in hot water for an online post voicing support for the "heroic army" operation in war-torn Syria. St. Pauli's fans had already expressed dissatisfaction with Sahin's past support for Erdogan's regime. (14.10.2019)