German federalism: COVID challenges the system | Germany | News and in-depth reporting from Berlin and beyond | DW | 13.12.2021

Germany is a federal republic — for historical reasons. But that system also has disadvantages, as can be seen in the struggle to contain the COVID pandemic. 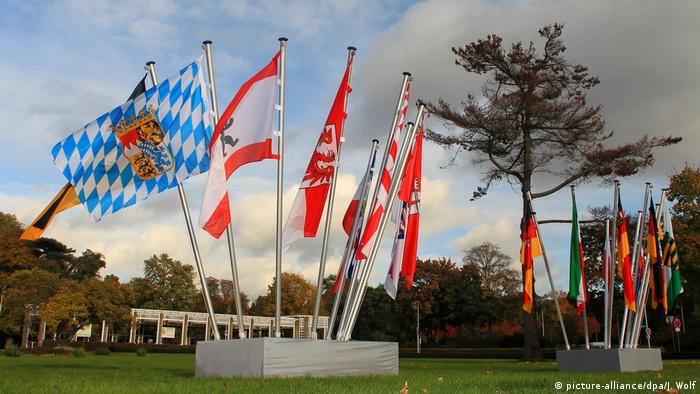 All of Germany's 16 states have their own flags

For almost two years, Germany's national and state governments have been struggling to combat the COVID pandemic.

Keen to keep workplaces and schools open, they imposed restrictions in the hospitality sector and travel.

With the up and down in infection rates, states have flip-flopped on restrictions, affecting the hospitality sector and travel — but also schools and private life.

Like the United States, and in stark contrast to France, Germany's 16 states hold considerable political power. In fact, Article 70 of Germany's constitution explicitly states that all lawmaking rests in the states' hands, unless stated otherwise in the Basic Law itself.

The list of regional powers is therefore long: health care, education, policing, cultural policy, construction planning — each state even has its own independent domestic intelligence service. 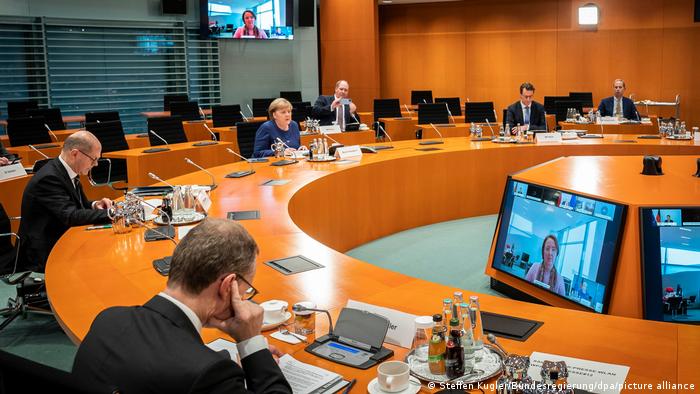 For almost any major policy that former Chancellor Angela Merkel wished to introduce nationwide, she required the unanimous approval of state leaders. And at most of the regular meetings of state premiers with the chancellor, it proved all but impossible to agree on a unified approach.

Knowing the historical context of German federalism is important in understanding the role played today by the 16 states, or Länder, that make up the modern Federal Republic of Germany.

Greater than the sum of its parts

The territory at the heart of Europe that we now call Germany has a rich and varied history — and its federal structures have existed in some form for centuries.

Unlike in neighboring France, where Paris became the seat of government and military stronghold early in the Middle Ages, east of the Rhine River, it was local princes and lords who ruled an area that, despite a shared language and culture, was far more disjointed.

German territory was historically made up of principalities or royal houses, some small city-states like Bremen, and some large kingdoms like Prussia. Later, more kingdoms and city-states joined — most claiming their own rights, currencies and customs duties.

Levels of autonomy and jurisdiction often varied between states. For centuries, the whole area of what is now Germany was not ruled by a central power, but rather by numerous sovereignties. They paid fealty to the Holy Roman Emperor, and later the German Emperor.

In return, the emperor arranged allegiances in foreign wars and allowed the expansion of power to such an extent that local sovereigns were often able to act on foreign policy as independent subjects of international law.

Following the abolishment of kings and emperors and the unsettled years of the Weimar Republic, Germany's federal tradition was broken for the first time by the Nazis.

Exactly one year later, the "Law on the Reconstruction of the Empire" abolished all rights of states. The federal self-governing bodies were replaced by "imperial governors" (Reichsstatthalter) who were directly subordinate to the Nazi government in Berlin and bound by its instructions. 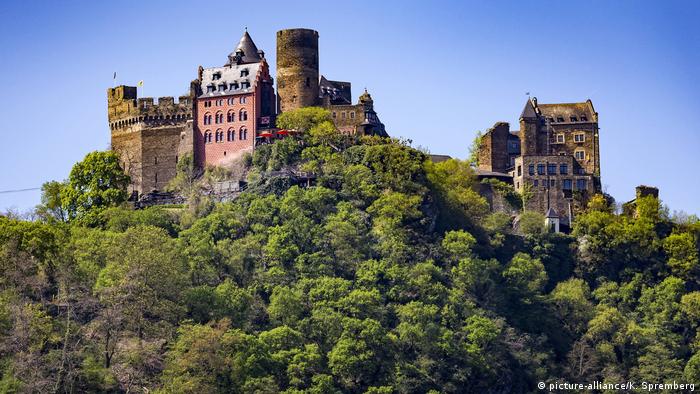 Once Allied victory was assured, the victors of World War II debated how Germany should be administered after the war. There was a consensus that the concentration of power under the Führer Adolf Hitler had been one of the main evils of the Nazi dictatorship — and that such a concentration of power must be prevented in the future.

At postwar conferences, the Allies decided to restore the power of states, which had been stripped away by the Nazis. In addition to the pre-war states, several new ones were also founded; often in new configurations that were a direct result of the war. 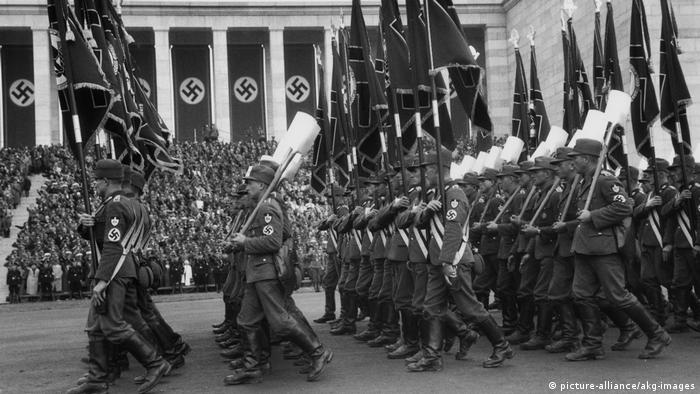 The eastern states were initially administered by the Soviet Union. These states became communist East Germany, formally called the German Democratic Republic (GDR). Federal states had been established by law there in 1945 by order of the "Soviet Military Administration" — but these were de facto abolished by the GDR in 1952.

In order to "create the socialist administrative structure," states had to surrender their powers to districts and county administrations. Federalism also had to give way to the centralized power of the ruling Socialist Unity Party in East Berlin.

After the decline of the party's rule, one of the most important tasks of the first and only freely elected GDR parliament was to restore the old states. This took place on July 22, 1990 — and adapted the GDR to the federal system of West Germany. Three months later, the countries were officially reunified.

In 1949, the founding fathers of the German Federal Republic attached great importance to the rights of the states.

The federal reality in the West

In West Germany — the former German Federal Republic — the founding fathers were keen to avoid a complete concentration of power in the hands of any central government. With the Basic Law, the German constitution that was signed off in Bonn in 1949, the Parliamentary Council attached great importance to protecting and guaranteeing the rights of states.

States were and still are also supposed to act as checks and balances on the power of the central government. Due to differing political power relationships in federal and state governments, that mutual check is virtually guaranteed to this day.

After reunification in 1990, former East Germany came under the jurisdiction of the federal republic's Basic Law.

But from the beginning, there were also concerns and structural flaws that posed major problems for German federalism. The size and economic power of the states remains extremely unequal: In modern Germany, population alone varies from North Rhine-Westphalia, with its more than 17 million inhabitants; to the city-state of Bremen, with barely 700,000.

The Allies had recognized the need for changes in the divisions of the states in the 1950s, and had urged the federal government to take action. But no attempt to reform state boundaries has been successful.

The most recent reform occurred in 1996, when the city-state of Berlin and the state of Brandenburg, which surrounds it, held a referendum to unify. The electorate voted against it.

Since the 1970s, there have also been several attempts to reorganize the division of powers between federal and state governments. But neither a government commission on constitutional reform nor a constitutional commission of the German parliament in the 1990s could agree on effective changes. 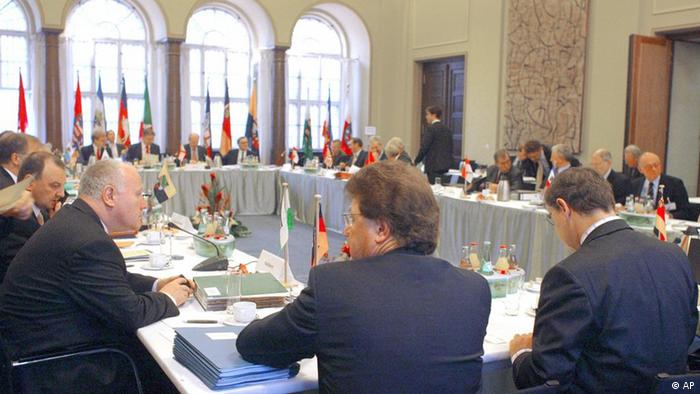 Federalism reform has been on the agenda of many a meeting of state premiers, like here in 2004

Many believe that reforming federalism is still vital. Under Germany's proportional electoral system, coalition governments are the norm. This means that each of the 16 states, plus the federal government, can have their own constellation of coalition partners in power at any one time — making unified governing at times virtually impossible.

To try to solve some of those problems, the federal coalition of the center-right Christian Democrats, the Bavarian Christian Social Union, and the center-left Social Democrats under Chancellor Angela Merkel passed a reform package in 2006. This took powers away from the states but simultaneously guaranteed them a continued strong say. This applies above all to education policy, which is exclusively regulated at the state level.

The states also gained or retained powers concerning civil service, the penal system, and environmental law. Overall, however, the proportion of laws requiring the approval of the state was reduced from more than half to barely a third.

At times, German federalism seems to allow state premiers to act like medieval princes defending their independence. But at the same time, federalism has been key in the success of Germany since World War II. Without it, neither the integration of more than 10 million refugees, nor the management German unity after 1990 would have been possible.