German farmers call for compensation in wake of dioxin scandal | Germany | News and in-depth reporting from Berlin and beyond | DW | 05.01.2011

German farmers call for compensation in wake of dioxin scandal

The German Farmers' Association has called for compensation in the wake of a contaminated feed scandal that has seen the closure of chicken farms across the country. On Wednesday, the scandal spread to the Netherlands. 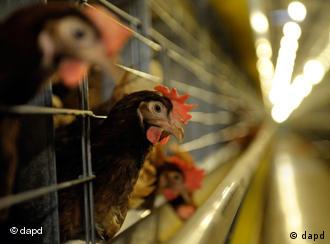 More than 1,000 chicken farms have been shut down

In the wake of a contaminated feed scandal that has closed chicken farms across Germany and now spread to neighboring Netherlands, the German Farmers' Association has said the feed producers responsible must pay compensation.

"Those who are responsible for the damage must pay for the damages," Helmut Born, the association’s general secretary, told the Thursday edition of German daily Tagesspiegel.

Born said it was still too soon to know an exact figure, but said the association expected a figure "in the millions" of euros. Born also called for a change in the laws concerning food and animal feed, saying firms producing industrial fats should be strictly separated from feed producers and the food industry.

The hazardous chemical dioxin, linked to the development of cancer in humans, was discovered in eggs and poultry in several German states last week. It is believed to have been introduced in animal feed contaminated with industrial fats.

Up to 3,000 tons of an animal feed additive were found to contain traces of dioxin, according to a report from the German Agriculture Ministry obtained by the news agency DPA on Wednesday. Earlier, officials had spoken of just 527 tons of contaminated feed.

The additive, a fat put it animal feed to give an energy boost, was sold to 25 German feed manufacturers by Harles and Jentzsch, a farm operating north of Hamburg. The fat comprised between 2 and 10 percent of the feed mixture for poultry and pigs, meaning a maximum of 150,000 tons of feed could have been contaminated. 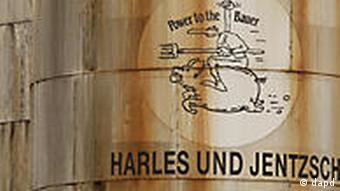 The contamination was first discovered at Harles and Jentzsch

On Wednesday, police carried out searches at the Harles and Jentzsch farm and a subsidiary farm in Lower Saxony. Public health officials have said the concentration of dioxin dose not pose any real risk to human health.

Minister calls for clarification on extent of contamination

German Consumer Protection Minister Ilse Aigner on Wednesday called on the states hit by the tainted food scandal to clarify for whether eggs contaminated with dioxin had been sold to consumers.

To date, North Rhine-Westphalia has been the only state to name two chicken farms that shipped products out to regional grocery stores. Most of the affected farms are said to be located in Lower Saxony.

As a result of the scandal, more than 1,000 chicken farms across Germany have been banned from selling eggs and poultry, and over 8,000 chickens have been culled.

State agricultural ministers plan to meet later this month to discuss the consequences of the dioxin scandal.

"There is an urgent need for much stricter penalties against those who break the law when it comes to food and animal feed regulations," said Juergen Reinholz, agriculture minister for Thuringia. He added that these "charlatans" could only be swayed by strict, deterrent sanctions.

Currently, offenders who use harmful or banned substances in food and animal feed can be fined or face up to three years in prison. 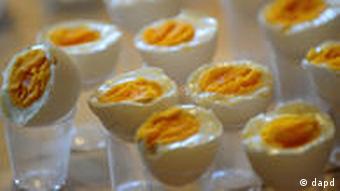 'Too early' to consider export ban

The contamination reached the Netherlands, where 136,000 eggs suspected of containing dioxin were delivered in early December, it was revealed on Tuesday. The eggs came from a supplier in the German state of Saxony-Anhalt, and the Dutch firm that took delivery was made aware of the situation, according to the German Agricultural Ministry.

Earlier in the day, a spokesperson for EU Commissioner for Health and Consumer Policy John Dalli had demanded to know whether contaminated eggs or meat had been exported to other member states. He said, however, that it was "too early" to consider a ban on exports.

A further 139 farms in North Rhine-Westphalia were closed on Wednesday as prosecutors in the state launched an investigation targeting chicken feed producers for having used contaminated ingredients.

Johannes Remmel, the state's consumer affairs minister, demanded consequences for those responsible for the dioxin contamination.

"This is a scandal and we have to discuss the political consequences," Remmel told public broadcaster ARD. "That means we have to talk about the [distribution] chain, whether the controls are sufficient," he said.

Remmel added that more farms could be shut down in the wake of the investigation. "I don't think we have an acute danger, but dioxin simply does not belong in food. There is a reason we have maximum permissible limits. Dioxin is dangerous to your health," he said.

Some dioxins are highly poisonous; others are less so. What they all have in common is that they collect in the body fat of humans and other animals and stay there for a long time. (05.01.2011)

The discovery of the highly poisonous chemical dioxin in eggs and poultry last week has unleashed an investigation and triggered calls for reevaluating food safety regulations. Now, the EU is getting involved. (05.01.2011)

A food safety scandal is spreading across several German states following the discovery of dioxin in eggs and poultry last week. The dioxin is believed to have stemmed from feed contaminated with industrial fats. (03.01.2011)