Arthur Wagner, a politician in the eastern state of Brandenburg, has become a Muslim. His Alternative for Germany (AfD) party entered the Bundestag last year following a populist, anti-Islam campaign. 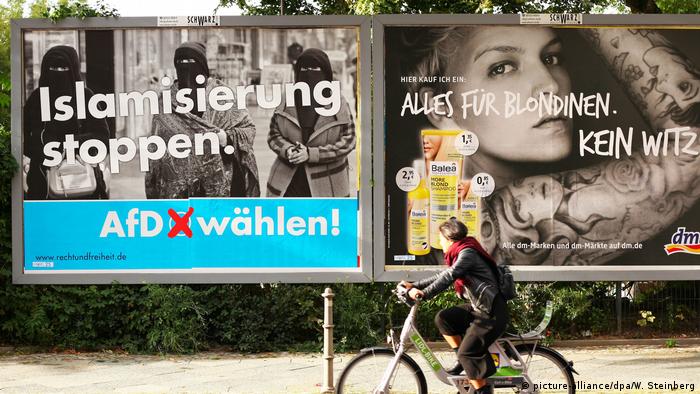 The far-right, anti-Islam Alternative for Germany (AfD) party on Tuesday confirmed reports in the German media that one of its politicians, Arthur Wagner, has converted to Islam.

"The party has no problem with that," added Friese.

He insisted the AfD's national party included groups representing the interests of Muslims, as well as Christians and homosexuals.

Wagner, a German of Russian origin, had been a representative of the AfD since 2015. He was a member of the state committee with responsibility for churches and religious communities.

Before joining the anti-Islam, anti-immigration party, he was a member of German Chancellor Angela Merkel's Christian Democrats (CDU).

Wagner refused to answer questions from the German daily newspaper Tagesspiegel, who first reported his conversion to the Islamic faith.

"That's my private business," he told the newspaper. But he said there had been no attempt by the party to force him to resign.

Support for the party surged after Germany admitted more than 1.5 million refugees and migrants in 2015 and 2016 at the height of the European migration crisis.

The AfD argued that the country was under threat of "Islamization" and demanded stricter border controls to stem the number of newcomers arriving from war-torn and poverty-stricken countries in Africa and the Middle East.

Wagner is not the first far-right politician to convert to Islam, according to the German daily Die Welt.

Arnoud van Doorn was asked to leave Dutch far-right politician Geert Wilders‘ Freedom Party (PVV). It later emerged he had taken up the Muslim faith and traveled to Saudi Arabia to perform the Haj (a pilgrimage to Mecca), the Guardian reported.

As the opposition, the Alternative for Germany is set to lead several parliamentary committees. But the German Cultural Council has warned allowing the far-right party to control culture would send a "fatal signal." (16.01.2018)

AfD lawmaker Jens Maier has been warned by his party over a racist tweet about the son of tennis legend Boris Becker. But Maier, who called Noah Becker a "half-negro," can remain in the party. (08.01.2018)