Although global supply chain issues have caused a slump, the latest data shows that German exports surpassed pre-pandemic levels for the first time in October. Some analysts were cautiously optimistic, others nonplussed. 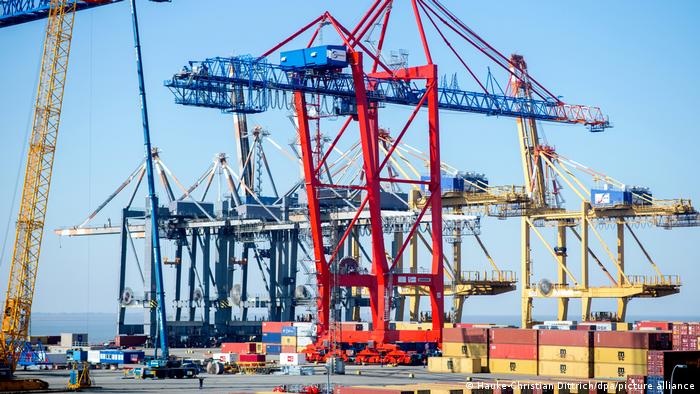 An increase in imports exceeded that of exports in Germany

Germany's exports bounced back in October despite global supply chain bottlenecks, according to figures released Thursday by the federal statistics agency, Destatis.

"Despite all the negative factors, German foreign trade is at last back at pre-crisis levels," Dirk Jandura, head of the German federal trade and services association BGA, said, in reference to the coronavirus pandemic, which throttled trade around much of the world.

"This is really good news, given the many supply chain problems," Jandura said. However, he added that logistical problems were likely to persist into the months ahead with a shortage of containers and skilled staff — and local coronavirus outbreaks.

According to Destatis, German exports were up 8.1% on the previous October, and also back above the pre-coronavirus crisis levels of February 2020 when seasonally adjusted.

Germany exported €121.3 billion ($137.4 billion) worth of goods in October, 4.1% more than in the previous month when seasonally adjusted.

Exports to EU countries were up 11.6%, while exports to countries outside the bloc climbed by 4.1%. And exports to China, an important trading partner for Germany, were up by 8.5% year-on-year in October.

Meanwhile, imports surged 17.3% against the previous October, also 13.5% higher than in February 2020 before COVID restrictions started kicking in worldwide. Germany imported €108.5 billion worth of goods in October, 5% more than in the previous month.

The trade surplus fell to €12.5 billion from €12.9 billion in the previous month.

Sebastian Dullien, director of the IMK economic research institute, saw the data as a strong performance that could help Germany "avoid a mini-recession at the end of this year due to the fourth wave of the coronavirus."

According to Dullien, speaking to AFP news agency, the figures suggested that the supply issues that have troubled industry in recent months were "gradually easing." Shortages of materials, particularly semiconductors and computer chips, have caused a setback to German industry, particularly the auto sector.

Despite his optimism, Dullien warned that the spread of the new coronavirus variant, omicron, could increase the risk of "factory closures in Asian countries and renewed difficulties in the supply of components."

On the other hand, the German Chamber of Industry and Commerce (DIHK) downplayed the figures.

"Much of the increase is down to price rises in important semi-finished goods and raw materials that our exporters then pass on to foreign customers," DIHK trade head Volker Treier told German news agency dpa. He added that difficult international conditions were likely ahead, citing the recent decline in international orders.

The Federation of German Industry (BDI) also seemed unimpressed by the latest figures. It corrected its predictions for the year downwards and is now expecting a real rise in exports of goods and services of 8%, down from 8.5%.

"Many sectors, vehicle manufacture in particular, are experiencing problems with the supply of semiconductors," BDI chief executive Joachim Lang said.