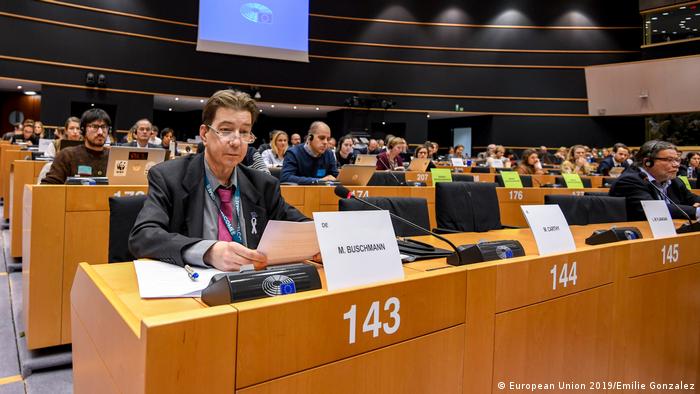 A German lawmaker in the European Parliament resigned from the body's far-left bloc on Tuesday after reports surfaced that he had once been a member of the neo-Nazi National Democratic (NPD) party.

Martin Buschmann, 49, a member of the fringe Animal Protection Party, admitted that he had joined the NPD "25 years ago" because he had "had fallen in love with a woman" who was a member.

According to a local newspaper near the Hamburg suburbs where Buschmann grew up, the Kreiszeitung-Wochenblatt, Buschmann was an NPD member from 1992 to 1996, when he resigned. The paper further accused Buschmann of initially trying to cover up his ties to the neo-Nazis, saying his lawyer had first denied that the lawmaker was a member — until they received correspondence instead debating the meaning of the term "active" participant.

Buschmann turned to left-wing causes after leaving the NPD, having been a member of the small Animal Protection Party since 2009. Before admitting his past, he had told the Kreiszeitung-Wochenblatt that he was politicized by his opposition to the LPT pharmacology laboratory in Hamburg, which has received repeated criticism for its inhumane treatment of lab animals.

Writing on his Facebook page, Buschmann said he had not been a particularly ardent member of the NPD, but that he had found it "difficult to resist the group dynamics" and had volunteered to carry out several party jobs.

He apologized for his past, "Nothing disgusts me more than racism, anti-Semitism, fascism or discrimination of any kind."

The European United Left - Nordic Green Left group in the European Parliament said in a statement that it was "disappointed in the breach of trust that has been committed" and had agreed with Buschmann's desire to resign.

A town council in the German state of Hesse has reversed its unanimous decision to add a politician with neo-Nazi ties to its ranks. (23.10.2019)

National Democratic Party supporters have come together in Hanover to protest against journalists, but they were vastly outnumbered by counterdemonstrators. There were no serious clashes between the groups, police said. (23.11.2019)