German Elections: What Happens Now? | News and current affairs from Germany and around the world | DW | 22.07.2005

German President Horst Köhler has dissolved the German Bundestag parliament. The decision paves the way for early elections unless the Federal Constitutional Court intervenes. What could still happen? 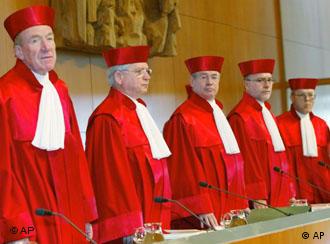 The judges in Karlsruhe will be coming back from vacation soon

Why is the election date set for September 18?

German law states that elections must take at the latest 60 days after parliament was dissolved. Köhler waited to announce his decision until July 21 so that the poll could be held on September 18 which comes one week after the end of the summer school break for the states of Bavaria and Baden-Württemberg. It is tradition in Germany not to hold an election during a school vacation.

Could the elections still be prevented from taking place?

Yes, but only theoretically. The Bundestag parliamentarians Werner Schulz (Greens) and Jelena Hoffmann (SPD), along with several smaller political parties, have announced they will appeal the dissolution to the Federal Constitutional Court in Karlsruhe. They claim that Chancellor Gerhard Schröder (SPD) misused a vote of confidence so that early elections could be held. According to them, early elections can only occur if the chancellor no longer can rely on his coalition to support him, something they say is not true, and hence, his call for a vote of confidence based on a lack of support was invalid.

How long could the Constitutional Court take to hand down a decision?

In 1983, when Chancellor Helmut Kohl (CDU) held a vote of confidence, the judges on the country's top court needed 28 days before handing down a decision. It is possible to expedite the process. For example, in June the judges took only ten days to demand a parliamentary commission inquiring into the "visa affair" continue.

Does the 60-day deadline also apply to the Constitutional Court or can it take more time to make a decision?

There is nothing that would prohibit the judges from taking more than 60 days. If they feel that the matter is too complex, the September 18 election date could be postponed.

What would happen if the Federal Constitutional Court ruled that Köhler's dissolution of parliament were unconstitutional?

Firstly, Germans would be outraged. If the judges in Karlsruhe were to decide that Schröder did misuse the vote of confidence, then they would also be denigrating Köhler. The administration in Berlin would be unable to rule just as Schröder had described it. SPD party chair, Franz Müntefering has repeated that there is no alternative plan. He said that Schröder would not resign from his post. The consequence: Bundestag president Wolfgang Thierse said the center-left coalition would be forced to continue their partnership. Schröder would remain at the helm which the public just would not understand. Polls have found that three-quarters of the population would like to see early elections.

This year isn't the first time Germany has dealt with a vote of confidence, but there is still plenty of gray area when it comes to the legal issues surrounding 2005's early elections.

Germany's high court is the authority on upholding the country's constitution and ensuring it's laws are adhered to. That goes for the chancellor's self-confidence vote and call for early elections this September.