Martin Schulz, candidate for the German chancellorship has reiterated that there’s need to crackdown on human trafficking and smugglers in a bid to stop illegal migration. 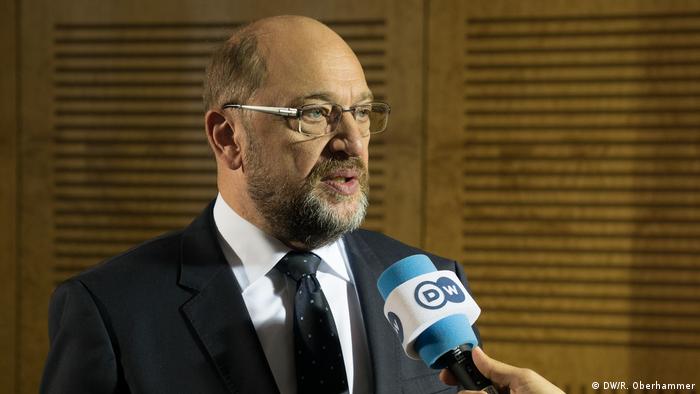 In an exclusive interview with DW, and without mentioning countries involved in the smuggling across the Mediterranean Sea, Social Democratic Party (SPD) leader, Martin Schulz, reiterated that Europe needs to come up with a legal framework to enable would-be asylum seekers, or migrants who need protection, to come to Europe.

"In order to stop human traffickers we must, if need be, work together with countries like Niger or others. That is only possible under the supervision of international organizations, because constitutional norms must be adhered to and there is at least a risk of some nations not being able to follow international legal norms," Schulz said.

His party's stance on migration does not differ greatly from that of Chancellor Angela Merkel from the Christian Democratic Union (CDU). However, Schulz believes the SPD would be better able to collaborate with African governments.

Read more: How does the German general election work?

Quizzed further on why he was ready to work with  African leaders who are perceived as dictators, Martin Schulz said that it was the work of the United Nations to engage such leaders, rather than leaving it as an entirely European affair. But he said that prospective migrants also bring something to Europe, making it a win-win situation.

On whether he would strike a "deal" with some countries, Schulz interjected, preferring not to use the term deal, as a means of finding a solution to the migration dilemma.

He was particularly critical of the way Turkey is dealing with the refugees issue, saying: "I for one am not willing to remain silent about how Erdogan is destroying democracy in Turkey just because of the refugee issue. I have said, and I will say again, that due to the way the Turkish government is currently behaving, Turkey cannot become an EU member. If that leads to us cancelling the refugee agreement then we will have to live with that.  And we will have to take care of the refugees. But I am not  prepared to get down on my knees in front of  Erdogan. We cannot allow ourselves to be blackmailed. And I say once again, the way I know him, he won't be tempted to instrumentalize the refugees for his foreign policy. I think if he did that he would lose all international credibility."

Chancellor Angela Merkel is seeking a fourth term this September, but the election race may not see a clear winner. Coalition building may prove interesting. Here's a who's who of German political parties. (06.09.2017)

#GermanyDecides: On the road to the elections

Six cities, two reporters, one question: What matters most to Germans ahead of the 2017 federal elections? Sumi Somaskanda and Nina Haase are hitting the road to find out. (12.06.2017)

The German chancellor has rejected calls from her sister party to limit the number of refugees entering Germany. In a wide-ranging interview she defended the G20 summit in Hamburg and spending on infrastructure. (17.07.2017)