The diplomatic rapprochement between Washington and Havana has also boosted Cubans' hopes of a breakthrough on the trade front. Now a German bicycle firm is seeking to profit from the nation's market opening. 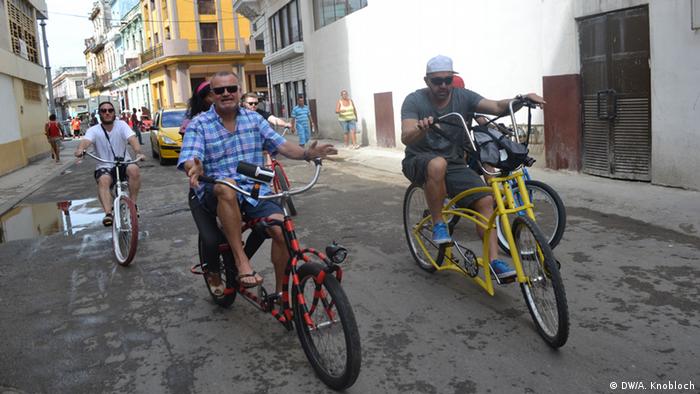 On a recent morning, Martin Staub was stopped by two policemen in the Cuban capital Havana. The German businessman was asked to pay a fine for riding a bike in the wrong direction on a one-way street. But when the police found out that Staub was riding an electric bike, they proposed a race - saying that if Staub won, he wouldn't have to pay the fine. In the race that ensued, the policeman narrowly managed to win.

Over the past two years, Staub has been selling bicycles with elongated steel frames, sweeping arms, deep seats and wide tires in the German city of Saarbrücken. And now he's setting his sight on the Cuban market.

Cuba's economy has been undergoing a transition in recent years, with certain sectors being opened to private investment and the setting up of a special economic zone around the Mariel Bay in Havana - to encourage foreign firms to set up businesses there. 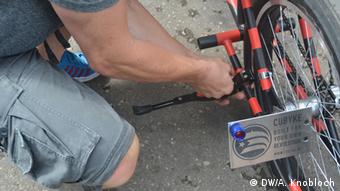 A year and half ago, a new foreign investment law also came into effect, changing the rules of the game. Even German Economy Minister Sigmar Gabriel recently paid a visit to the Caribbean island nation.

"The new investment law attempts to lure investors by offering them a variety of incentives, including tax benefits, duty-free imports, temporary residence permits and the opportunity to acquire property on the island," said Staub. In addition to the incentives, the desire to be a part of the change taking place in Cuba drove Staub's decision to invest in the country.

Initially, Staub had pondered various business options such as photovoltaics, waste management and brewing; but he later abandoned them due to high investment costs, and then opted for bicycles. "I knew two bicycle makers from Saarbrücken, who make self-designed bicycles," he said.

Staub had previously worked for a financial services company for 30 years. The first time he traveled to Cuba was in the 1990s, during a period of severe economic crisis following the collapse of the Soviet Union. The dismantling of the communist bloc led to a plunge in Cuba's foreign trade.

US and Cuba to restore commercial air routes

Commercial flights are set to be restored between Cold War foes the US and Cuba. Several airlines have expressed interest as US travel to the island nation has increased in the past year. (17.12.2015)

Cuba has placed limits on doctors leaving the country, saying its healthcare services have lost vital medical specialists. The announcement is a backtrack by Cuba, which ended most travel restrictions in 2013. (01.12.2015)

In a historic move, US telecommunications giant Sprint has signed a deal with Cuba to provide direct roaming services to foreigners visiting the island nation. The deal comes as the former rivals seek to normalize ties. (03.11.2015)

Still, Staub was impressed by the island nation, with its sun shine and tropical climate, and has since regularly visited Cuba. "The business idea involving bicycles is the result of my passion for Cuba as well as the nation's economic opening," he underlined.

Originally, Staub had intended to manufacture the bicycles in Cuba and export them worldwide. However, the businessman later scrapped his initial plan as the Mariel special economic zone, where he wanted to set up his manufacturing facility, required him to rope in an international consultancy firm to conduct a feasibility study.

"The high costs associated with such studies would have led to my wasting a quarter of my investment money," he said, stressing that the Cuban government mainly aims to lure large companies such as Siemens, Volkswagen and Bosch to set up plants at Mariel, and not small and medium-sized enterprises.

This is why Staub continues to manufacture his company's e-bikes in Germany, with cooperation from Saarland-based engine maker Hitec.

Their sale, too, has so far been limited to Germany.

As a first step, Staub now aims to launch an e-bike renting company in Cuba. And to this effect, he has been engaging in negotiations since last November with Cuba's tourism ministry and travel agencies.

The businessman says both the authorities and travel agencies have expressed their interest in the project. Even German travel agencies operating in Cuba, he pointed out, have responded positively in hopes that e-bike tours would turn out to be their unique selling proposition (USP), thus helping them stand out from their competitors.

Staub initially wants to limit his company's operations to Havana and its neighboring cities, as the entire infrastructure involving charging stations, workshops and equipment for carrying out repairs have to be set up.

The project is expected to take off as soon as an agreement is reached with the Cuban partners, Staub said. There are, however, a few uncertainties and legal hurdles that need to be dealt with.

"It takes a lot of passion and much perseverance to do business here," says Staub. "There is no formula about how to open a company here. We are in an experimental stage, and we need time, patience and understanding of the other culture." Then he jumps on his electric bike to take another ride through Havana.