German Defense Minister Ursula von der Leyen has told Bundeswehr troops in Afghanistan they should prepare to stay in the country for the foreseeable future. This follows the Bundestag's decision to raise troop numbers. 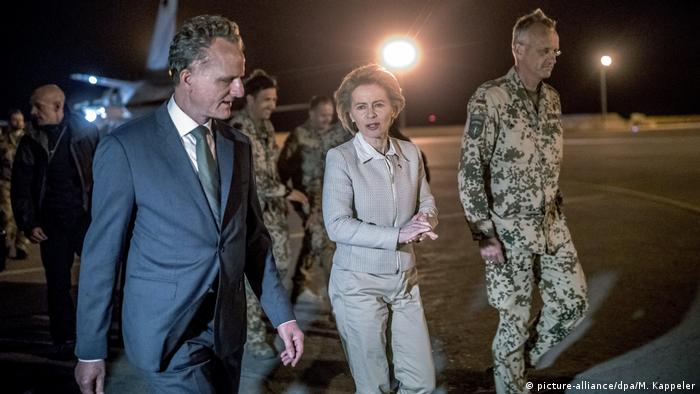 German Defense Minister Ursula von der Leyen admitted on Sunday that Afghanistan was still far from ready to take responsibility for its own security situation.

"It is not a question of a time frame that must be stubbornly stuck to," von der Leyen told German troops during a visit to the Bundeswehr base in the northern Afghan city of Mazar-i-Sharif.

The length of the mission in Afghanistan depended on whether conditions in the country improved, she said, adding that "we need patience and staying power."

Von der Leyen's remarks came on the back of the German parliament's decision on Thursday to extend the Bundeswehr's mission to Afghanistan, now in its 16th year, and raise the number of troops stationed in the conflict-ridden country from 980 to 1,300.

Germany's new ruling coalition government has also vowed to increase military spending by some €10 billion ($12.4 billion) over the next four years, with further funds expected to be allocated towards development aid.

The German Defense Ministry defended the rise in troop numbers amid concerns that it would overstretch the Bundeswehr's aging military equipment.

The German military came under criticism in the winter after it was able to carry out only around a half of its joint operations alongside the Afghan army. Von der Leyen blamed these shortcomings on a lack of security personnel and vowed to "fix this situation."

NATO's "Resolute Support" mission is focused on training, advising and assisting Afghan security forces in the ongoing conflict with extremist groups, such as the Taliban and affiliate divisions of the so-called "Islamic State" (IS). The German military is involved in implementing these goals in northern Afghanistan, mainly in the city of Kunduz.

Von der Leyen's pledge to keep German troops in Afghanistan reflects the deteriorating security situation in the country. A resurgent Taliban has regained control of large pockets following the initial withdrawal of US-led NATO troops at the end of 2014. IS affiliates also remain powerful in the region, despite the main group having been effectively defeated in Syria and Iraq.

Afghan security forces currently only control around 60 percent of the country: "That is good, but not enough by a long shot," von der Leyen said.

The Afghanistan military's wavering control has prompted a surge of extremist attacks since the new year, the most devastating of which saw a Taliban suicide bomber blow up an explosive-laden ambulance on a busy Kabul street in January, killing more than 100 people and injuring at least 235.

According to the United Nations, more than 10,000 civilians were killed or wounded in the ongoing war in Afghanistan in 2017, with militant bombings and terror attacks responsible for a majority of the casualties.