Ahead of a defense ministers' meeting in Brussels, the German defense minister says he supports more European military cooperation. In a time of austerity, resources should be shared, said Karl-Theodor zu Guttenberg. 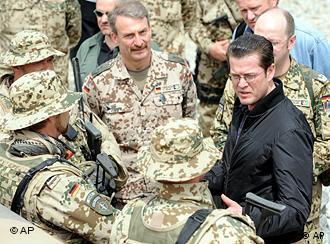 German Defense Minister Karl-Theodor zu Guttenberg said he is willing for Germany's military to share some of its duties with other armies in Europe.

In an opinion piece written for the Frankfurter Allgemeine Zeitung daily on Thursday, Guttenberg said there could be a "sharing of roles and duties" among European countries.

In Brussels later Thursday, Guttenberg together with his Swedish counterpart Sten Tolgfors will present a project advocating reinforced European military cooperation. European defense ministers are meeting to examine how to make up for the general cut in military budgets due to widespread austerity measures.

Pooling of skills and materials 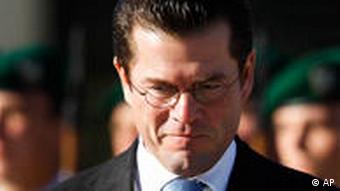 Guttenberg said some military duties are essential for each nation and would "remain within the national competence."

However the "scarcity of resources in all nations " means that the pooling of skills and equipment to support European partners is important.

"The commitment to European defense must be more than just lip service," Guttenberg said in the article. "By intensifying our military cooperation, we will all benefit in the end."

The minister suggested three categories of cooperation. The first would cover military duties that are simply in the national interest and can be handled alone. The second would be a "straight collaboration between partners, without them abandoning national responsibilites." In the third category, there were duties for which "one could lean on a European partner."

Examples of cooperation in the last two categories include joint financing of research and development, training and shared use of materials.

Germany's defense minister has said he wants troops in crisis regions to work more closely with humanitarian aid agencies on the ground. Aid groups are opposed to the idea. Is there room for compromise? (03.12.2010)

Following a trip to Afghanistan to visit German troops, the parliamentary commissioner for the armed forces has called attention to equipment shortfalls for Bundeswehr troops in Afghanistan. (04.11.2010)

An independent commission of military experts has recommended that the German Defense Ministry make significant cuts to staff and the number of Bundeswehr troops, as well as moving the ministry's headquarters. (27.10.2010)