German Cup: Treble talk getting louder as Leverkusen prove no obstacle to Bayern

Bayer Leverkusen were just another side in the way of Bayern Munich, but proved no match for them. The Bavarians have made the German Cup final again, and their season could yet get much, much better. 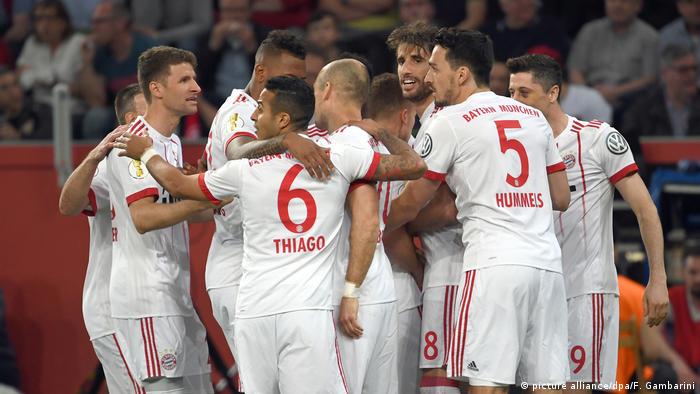 There’s an inevitability to almost everything that Bayern Munich do. Jerome Boateng’s timing and accuracy, Franck Ribery’s control, Robert Lewandowski scoring, Arjen Robben saying after a 6-2 that the ball had been lost too often – none of it is surprising. And yet, it remains remarkable every single time.

For all of their efforts, Leverkusen were not going to stop Bayern from reaching the final in Berlin. A slightly louder crowd, a pre-game choreography to drum up a special cup atmosphere, a goal to give hope when all looked lost; they were all special moments, but far too brief to add up to a serious challenge.

Whatever Leverkusen did, Bayern did it better. Three minutes in, Javi Martinez scored the opener. Three minutes later, Kevin Volland couldn't place a free header past Sven Ulreich. In the second half, with the game still close, Volland can't score with the goal gaping and then Ulreich has to save again.

Minutes later, Thomas Müller scores in typical fashion to end the contest. And if there was a World Cup battle going on between the keepers, not even two late saves to stop Bayern from scoring seven was enough to give Leno an edge over Ulreich. The Bayern keeper had another excellent night.

That's the thing about Bayern – they just win. Franck Ribery weaving down the left isn't new, but it still works and it's still effective. Thiago's masterful control of a game isn't any less impressive just because it comes in another goal-heavy win for the Bavarians. And Jerome Boateng's ability to be everywhere when he needs to is no less special because he does it for Bayern. They are a tour de force, and in the German Cup semifinals Leverkusen were just another team in the way.

Heiko Herrlich can’t be accused of not trying to change the tide after perhaps taking a risk by starting Karim Bellarabi who looked short of match practice. Leon Bailey, a surprise omission from the starting line-up, came on at the break to try and be a game winner once again.

“We had to change,” Bailey said afterwards. “[Panagiotis] Retsos was on a yellow and it was difficult. [Arjen] Robben, when he’s attacking… he can get the next yellow and we couldn’t afford to get the red card. We went to 3-4-3. I was playing left back, had the wing to myself. It’s difficult because you always have to come in at the end. It’s not something easy to handle, but I did my best. I tried to do as much as I could but it wasn’t enough.”

Before the game, Jupp Heynckes tipped Leverkusen to be one of the sides challenging for the title next season. For a man who used to coach the pharmaceutical club, this felt like a touch of courtesy towards an old friend. Afterwards, that statement looks little more than another stark reminder of how far away the rest of the Bundesliga is from Bayern Munich.

The only difference is that the 2017-18 Bayern has an edge. “From the goalkeeper to the striker they have tremendous contact with each other and that’s very important. When you know your players so well, know where they’re going to run and where to put the ball for them. I think that’s what makes them different,” Bailey said on why Bayern are so much better than everyone else. For all the unity teams claim to have, Bayern Munich clearly have another level of understanding – and it’s what makes them so ruthless.

Domenico Tedesco and Niko Kovac have already stolen their fair share of headlines this season. Now the two young, overachieving coaches are set to battle it out for a spot in the German Cup final. (17.04.2018)

A Naldo hammer, a hat trick and a trio of German youngsters daring to win a spot on the plane to Russia this summer. From facts to quotes, here's all you need to know from Matchday 30 in the Bundesliga. (16.04.2018)