Dortmund's new era under Lucien Favre started with a wobble, as they struggled to get past second-tier Greuther Fürth in the German Cup. Marco Reus saved Dortmund's blushes in a come-from-behind 2-1 victory. 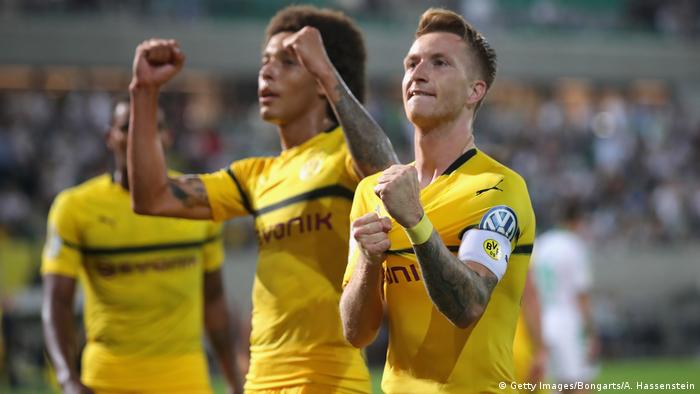 No striker, no problem? Not quite for Borussia Dortmund, but they did enough - just - to squeeze their way into the next round of the German Cup and give new coach Lucien Favre a winning start to his reign.

Dortmund controlled possession for the majority of the match and fashioned a few early chances that should have seen them pave the way for a comfortable victory.

But Fürth had other ideas and took a deserved lead in the second period, before Dortmund produced a Marco Reus-inspired comeback to book their place in the next round.

Favre sent his team out without a recognisable No.9, simply because he doesn't have one at his disposal. Instead captain Reus led the line with a support cast of Mario Götze, Marius Wolf and Christian Pulisic.

For all the attacking flair present in that foursome, the team didn't click despite early dominance.

The first chance, or chances, fell to left-back Marcel Schmelzer in the 8th minute, who had two bites of the cherry but saw both efforts well blocked by Sascha Buchert.

Just after the 30-minute mark, Marco Reus hit a beautifully struck free-kick from 30 yards out but Buchert once again stood firm to tip the ball over the bar. And just before the break, new signing Thomas Delaney sent a decent chance over.

Dortmund were made to pay for their profligacy. In the 77th minute, Daniel Keita-Ruel pinged a loose ball into the danger area for Sebastian Ernst to poke past Roman Bürki. It was the least a hard-working Fürth deserved.

Dortmund, however, found inspiration from their captain, Reus, who had been allowed to drop deeper thanks to the introduction of Maximilian Philipp. 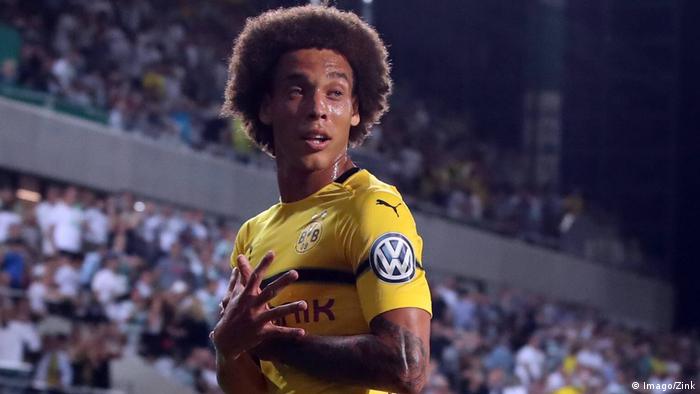 Debutant Axel Witsel made a big impression for Dortmund from the bench.

In the last minute of injury time, with Fürth scrambling to clear their lines, Reus delivered a pin-point ball into the box for Alex Witsel to coolly cushion his shot into the back of the net.

A nervy extra 30 minutes saw both sides create decent openings and Dortmund were thankful to Bürki, who twice produced top saves to keep the BVB in the game.

Again, captain Reus stepped forward, sweeping home in the 120th minute after substitue Jadon Sancho brilliantly danced his way to the byline and cut back to perfection.

It was a let off for Dortmund and Favre, who will surely now recognize the need to bring in a specialist striker before the transfer window closes. Next up is RB Leipzig on Sunday for the Bundesliga's opening matchday, an opponent that will not be as forgiving.

120'+4 FT Fürth 1-2 Dortmund — It's all over. A dramatic night in Fürth ends in the most dramatic of victories for Dortmund, who score in injury time at the end of normal time and extra time to go through. A real night of drama here.

120' GOAL! Fürth 1-2 Dortmund — Reus has won it for Dortmund! Oh, the scenes. Sancho makes it, beating his man and pulling the ball back to Reus, who makes no mistake from close range. Fürth's hearts are broken.

117' Will Fürth live to regret that miss? Such a huge opportunity for the hosts.

113' Huge chance for Fürth! Bürki makes a huge save to keep Dortmund in the game! Reese goes clean through with only Schmelzer in pursuit. Reese shakes off Schmelzer but Bürki is quick off his line to make a huge save. But Reese really should have put Fürth back in front.

111' Dortmund cranking up the pressure. They really don't want this to go to the lottery of penalties.

108' Philipp gets into a great position but scuffs his shot and fails to get much power on it.

105' HT in ET Fürth 1-1 Dortmund — Halfway through extra time and the spectre of penalties looms ever larger. 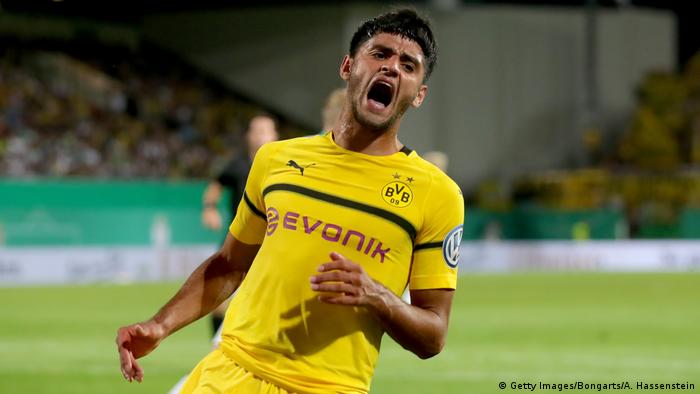 It has been a long, frustrating night for Dortmund.

101' Fürth caught on the break as Witsel feeds Dahoud, who runs and runs and runs straight into a Würth defender. Such a disappointing end to what looked like a promising opening for Dortmund.

95' The mood in the stadium is subdued compared with the moments before that last-gasp equalizer from Witsel.

90'+6 FT Fürth 1-1 Dortmund — With almost the last kick of the game, Witsel levels for Dortmund. What a moment, and Fürth look crestfallen. We go into extra time...

90'+5 GOAL! Fürth 1-1 Dortmund — Drama! Witsel scores on his debut to get Dortmund out of jail! Reus picks him out at the far post and the Belgian cushions the ball in at the far post. Unbelieavable scenes.

90'+3 Bürki has parked himself on the halfway line as Dortmund throw everything at Fürth.

90' We'll have six minutes of added time. Dortmund heading out of the German Cup.

88' Fürth are defending deeper and deeper, but time is against their opponents.

85' Dortmund are peppering the Fürth goal but unable to create anything clear cut, and the hosts are dealing with whatever is thrown at them. Five more minutes for them to hold on...

80' Fürth absolutely deserve to be ahead here. They have defended resolutely and have taken their chance when it came. Now they are ten minutes away from a memorable victory. 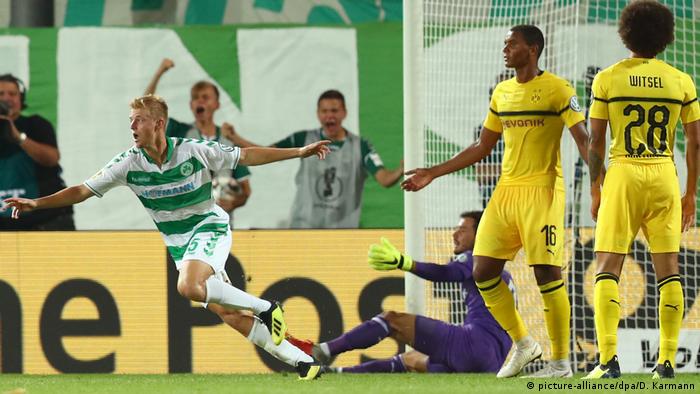 Sebastian Ernst reels away in delight after putting Greuther Fürth ahead.

77' GOAL! Fürth 1-0 Dortmund — Fürth are ahead and we have a huge shock on the cards here! Dortmund caught cold on the break, the cross comes in from the right and Sebastian Ernst tucks it away at the far post.

71' Dortmund look absolutely blunt in attack. No attacking threat and they're really missing Batshuayi, who was so effective for them in the second half of last season.

68' Pulisic skins the Fürth right-back but Roberto Hilbert, but Hilbert recovers very well to cut out Pulisic's cross at the expense of a corner. Fürth get the corner clear.

62' Over an hour gone and still no breakthrough. We're surely not far away from a substitution for Dortmund.

60' Double chance Dortmund! Götze cuts in from the left and drills a low shot at goal, but it is charged down. The ball falls at the feet of Pulisic, who finds space to dig out a shot, and the ball crashes against the outside of the post.

59' A long ball tries to pick out Reus, but it races away from the Germany forward. Dortmund seem to be running out of ideas...

56' A deep cross almost finds Julia Green at the far post, but the American can't wrap his foot around the ball. It was a difficult chance.

54' Piszczek cuts in from the right and drills a low shot at the Fürth goal, but it's relatively comfortable for Burchert.

53' You would think that Dortmund would be more than equipped to punish Fürth on the counter-attack, but the final pass is always off and they lack a focal point to their attack.

50' Schmelzer forced into clearing a deep free-kick into the Dortmund box as Fürth keep up the pressure here.

48' Decent chance for Fürth as they win a corner early on. The home side showing plenty of positivity at the start of this second half. 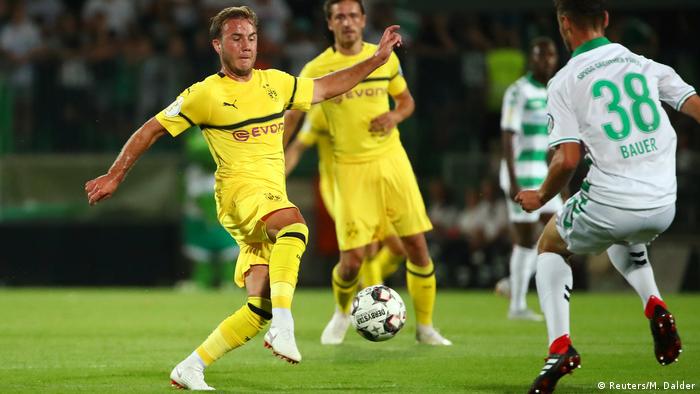 Goalless at half time, with chances at a premium.

45' Fürth 0-0 Dortmund — Goalless at the break and Fürth deserve every bit of it. Dortmund have looked dangerous at times, but have absolutely no end product. Frustrating for them, but the Fürth fans are bouncing.

42' It's been a frustrating half for Dortmund, who have been the dominant side but haven't created much to warrant the lead. 0-0 and almost half-time, and Fürth are good value for it.

40' Dortmund ping a couple of free-kicks into the Fürth box but it doesn#t fall for anyone and Fürth live another day.

36' Fürth right-back Roberto Hilbert cuts in from the right and has a go from a long way out, and it drifts just wide. Worth a go.

33' Schmelzer completely misjudges a header back to Bürki and it goes out for Fürth's first corner of the game... but Dortmund handle the ball into the box with ease.

32' CLOSE! Reus bends a lovely free-kick around the wall and dipping towards goal, but Fürth keeper Sascha Burchert does well to tip it over. Dortmund getting closer...

29' Fürth will do very, very well to reach half time on level terms.

26' Dortmund creating most of their chances down their right wing, which is giving poor Max Wittek lots to do. Würth are struggling to handle Dortmund when they fly forward in numbers.

23' Reus and Schmelzer each stab at the ball from close range, but Fürth get bodies back to deny them. Dortmund starting to make chances now.

20' Promising Dortmund attack as Piszczek gets into a great position on the right, but makes a dog's dinner of his cross, which sails straight out of play.

18' Dortmund in complete control but yet to really create much to worry the hosts.

16' Pulisic appears to be switching wings at will. He doesn't seem bound the right side in what appears to be quite a fluid system.

13' So far so good for Fürth. Very much holding their own against Lucien Favre's side. The Dortmund coach incidentally is barking instructions from the edge of his technical area. This is Lucien Favre's first game in charge of Dortmund.

10' Pulisic with the chance to run at the Fürth left-back Max Wittek for the first time, but Wittek stands up to the challenge and halts the American's run.

7' Dortmund knocking it about confidently, but Fürth defending well and not giving the Bundesliga side an easy ride.

3' Dortmund seeing a lot of the ball in the opening moments, as you'd expect. An absolutely packed house at the Sportpark Ronhof, as you'd also expect. A titanic atmosphere for what is their biggest game of the year.

20:30 Welcome to live commentary of Fürth vs. Borussia Dortmund. The teams are out...

Borussia Mönchengladbach scored 11 goals as they beat Hastedt. Elsewhere, RB Leipzig came from behind to avoid a shock at fourth tier Viktoria Cologne, while FC Cologne hit nine past BFC Dynamo in Berlin. (19.08.2018)

As is tradition, the first round of the German Cup truly got Germany's football season underway. Bayern Munich had to huff and puff more than expected, and that was story of the day for most undesliga sides. (18.08.2018)

Schalke are safely through to the second round of the German Cup after an uninspiring victory at Schweinfurt. St Pauli lost to third-tier side Wehen Wiesbaden after three goals in a thrilling extra time period. (17.08.2018)

Hoffenheim are out of the German Cup after losing 7-6 on penalties to second tier team Greuther Fürth. Borussia Dortmund made heavy weather of Eintracht Braunschweig, while Schalke picked up a rare win, beating Ulm.

There will be just two all-Bundesliga clashes in the men's German Cup Round of 16, while the favourites dodged each other in the women's quarterfinals. Meanwhile, PSG have named a new head coach.