Holders Bayern Munich progressed to the second round despite the best efforts of Energie Cottbus' young goalkeeper. Elsewhere, Wolfsburg needed extra time to see off Halle while Stuttgart gained revenge on Rostock. 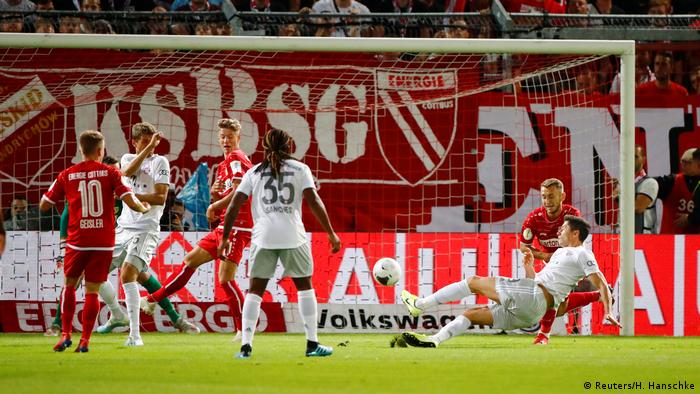 "It's simply not realistic," said Energie Cottbus coach Claus-Dieter Wollitz when asked about his team's chances of knocking out Bayern Munich – and so it proved, as the cup holders won 3-0 in Brandenburg.

The young fourth-tier side held Bayern at bay for half an hour at the Stadion der Freundschaft ("Stadium of Friendship"), thanks in particular to some impressive stops from goalkeeper Lennart Moser. The 19-year-old also blocked Kingsley Coman's header at point-blank range, but could do nothing about Robert Lewandowski's follow-up as the Pole put Bayern ahead.

He should probably have done better however with Bayern's second goal. Coman's right-footed shot was well struck from outside the box but Moser will have been disappointed that it slipped under his grasp.

With 10 minutes remaining, the hosts finally forced Manuel Neuer, the German international turning Moritz Broschinski's effort round the post following a rare Cottbus counterattack. Wollitz kept roaring his team on from the sideline in search of a goal, until Leon Goretzka's shot deflected off Lewandowski late on to make it three.

Finally, with the last kick off the game, Cottbus had something to celebrate. After a foul by Goretzka in the box, Berkan Taz stepped up to convert the penalty. It made the scoreline look more than respectable, anything else was always going to be unrealistic for Cottbus. 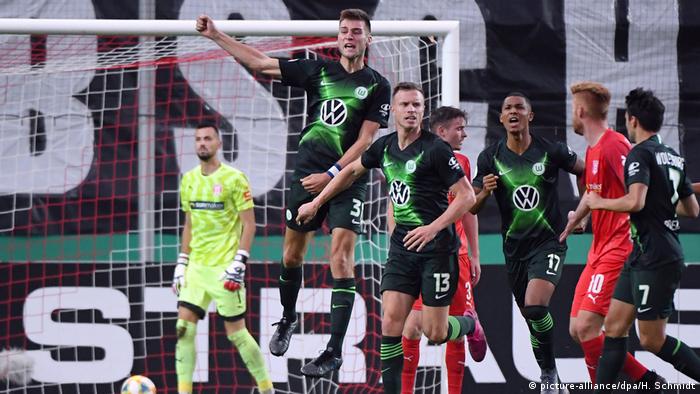 Europa League participants Wolfsburg needed extra time to overcome third-division Halle who, for over 90 minutes, simply refused to be beaten.

The lower-league hosts even took the lead just before halftime in Saxony-Anhalt but Wout Weghorst immediately drew the Bundesliga side level. After the break, Yannick Gerhardt put the Wolves ahead, only for Halle to equalize through Sebastian Mai.

The eastern Germans' resolve appeared to have been broken when William put Wolfsburg 3-2 up with twenty minutes remaining but, moments after captain Josuha Guilavogui had been shown a second yellow card, Mathias Fetsch scored a dramatic injury-time equalizer to usher in another 30 minutes.

But Wolfsburg only needed four of those, with Robin Knoche and Josip Brekalo quickly making it 5-3 and effectively ending the tie.

Third-division Hansa Rostock spectacularly knocked Stuttgart, then of the Bundesliga, out of the German Cup at this stage last season. Twelve months later, the two were drawn together again but there was to be no repeat upset on the north-east coast as the Swabians took revenge.

But Rostock, inspired by last summer's heroics against the same opponents, weren't fazed and continued to dominate proceedings in the second half and should have equalized through John Verhoek, but the striker put his free header wide, as Stuttgart held on.

Two Bundesliga 2 sides met at the Wildparkstadion, with Karlsruhe overcoming Hannover thanks to second-half goals from Lukas Grozurek and Marvin Wanitzek.