The heads of Germany's ruling coalition faced uproar after firing intelligence chief Hans-Georg Maassen only to immediately promote him. The issue seems far from settled as Angela Merkel agreed to reconsider the move. 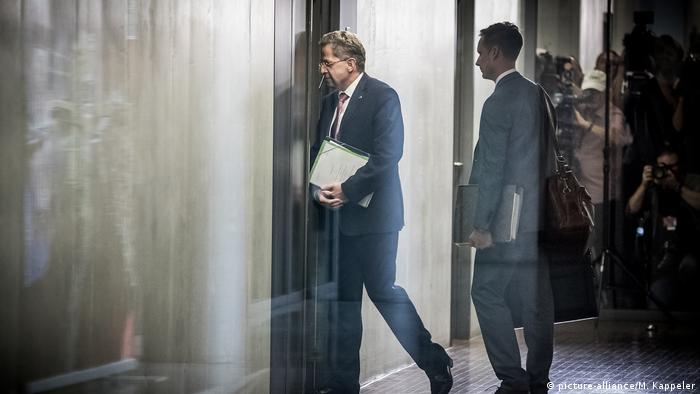 "The chancellor believes it is right and appropriate to revalue the current issues and to find a joint, sustainable solution," Merkel's spokesman Steffen Seibert said on Friday.

Read more: Maassen promotion a win for the right

Maassen was forced out from his post as the head of Germany's BfV intelligence agency after publically disputing the authenticity of a video shot during the unrest in Chemnitz. The recording showed a far-right mob chasing people they thought were foreigners. However, Maassen said the BfV had "no reliable information" that such events took place and insinuated that reports about them could be "deliberate misinformation."

His remarks sparked an outcry from politicians and the public, prompting the government to fire Maassen as the head of BfV earlier this week. At the same time, however, the officials announced Maassen would be taking up a better-paid position as deputy interior minister.

The move was an apparent compromise between the left-leaning SPD and Maassen's ally, Horst Seehofer, who is Germany's interior minister. Seehofer is also the leader of the Bavarian CSU, which is part of the ruling coalition, alongside the SPD and Angela Merkel's CDU.

The deal only prompted more criticism from the public. On Friday, SPD leader Andrea Nahles wrote a letter to Merkel and Seehofer urging them to reconvene and re-examine the move they all agreed to days before.

"The deeply negative response from the people shows that we were wrong," Nahles wrote. "We have lost trust, instead of gaining it."

In response, Interior Minister Seehofer said he was "considering" reopening the issue.

"I believe that a new consultation makes sense if a consensual solution is possible," he told the DPA news agency.

Addressing the public on Friday, Chancellor Angela Merkel said the three ruling parties want to present the solution on Maassen during the weekend.

The situation should be "re-evaluated" Merkel told reporters in Munich, adding that people in Germany "have a right to expect us to solve their concerns and problems."