Nothing says Black Forest like cuckoo clocks and gateau. The combo of dark sponge cake, cream, cherry and schnapps celebrates its 100th birthday this year. Yet, it was not even created in the region. 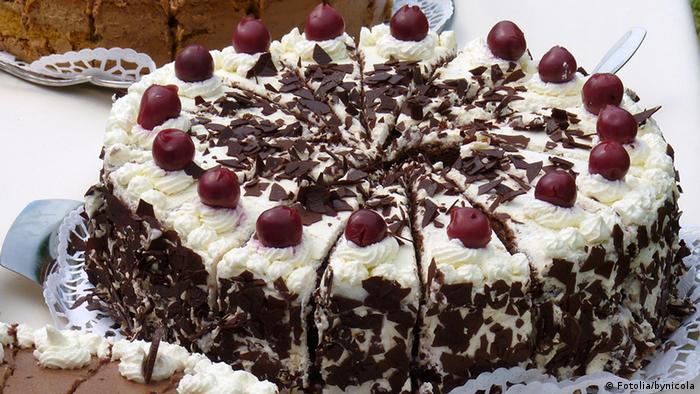 "Creating Black Forest gateau is my daily business," says Freddy Boch, who owns the Hotel Engel in Todtnauberg near Freiburg, in the southern Black Forest region. Every day he makes several gateaus. He doesn't need a recipe; it's all in his head. A shot of kirsch schnapps creates the dessert's special flavor. 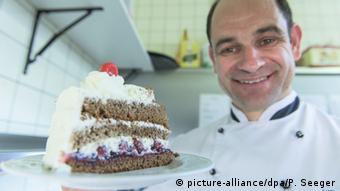 "Black Forest gateau is our region's most famous export," says Christopher Krull, CEO of the Black Forest Tourism Association in Freiburg. "And it is the most famous and most popular gateau in Germany," he adds.

The high-calorie dessert is among the most ordered sweets in cafes, restaurants and mountain huts. Its name is inseparable from the Black Forest region. It's known in Australia, Asia and South Africa. Only Vienna's Sacher cake enjoys similar stardom.

Born in the Rhineland

The gateau was invented 100 years ago. According to the official story, it was created by baker Josef Keller (1887-1981), who first decided to combine cream, cherries and schnapps in a cake. Keller, who had been born in the Swabian Riedlingen on the river Danube, was working at the Cafe Ahrend in Bad Godesberg near Bonn at the time, where he first served the dessert in 1915. Hence the cafe is considered the birthplace of the Black Forest gateau. It still exists, although it's now called Cafe Agner.


Then Keller moved to Radolfzell on Lake Constance and opened his own cafe, where the gateau once again became a popular favourite. From there, it travelled around the world. One of Keller's trainees took the original recipe which is now kept at a pastry shop in Triberg in the Black Forest region. 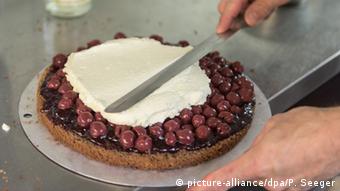 A combination of cherries, cream and schnapps

However, the locals are not too bothered by the Swabian pastry chef who reportedly created the Black Forest specialty in the Rhineland. Things are not that clear, they say. Thus, the Swabian town of Tübingen equally claims to have invented the classic gateau - however, only in 1930 and therefore 15 years after its "birthday" in Bad Godesberg. The idea of serving preserved cherries with cream and sometimes with a shot of schnapps has been around in the Black Forest for a while. In dispute is who brought in the gateau.


While the combined gateau itself is now old, it's unlikely to go out of fashion any time soon. On the contrary, more people are eating it now than ever before. "We benefit from a trend towards regional and unique foodstuffs," says 46-year-old restaurateur and hotel owner Boch who has made the gateau his signature dessert - among others through the largest cherry cake in the world. "It is important that it is technically well executed," he says. The recipe has not changed in 100 years.
Nutrition experts worry about the calorie intake. However, the gateau also contains regional and natural ingredients, says pastry chef Franz-Josef Koszinowsky. The cherries are local, and the schnapps is distilled locally from Black Forest fruit. "For a long time we have taken the cherry gateau for granted, today it takes centre stage," says Boch. 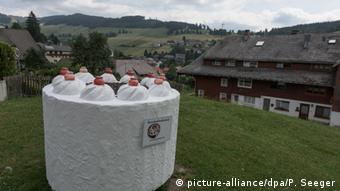 The gateau festival in Todtnauberg

Every two years there is a cherry gateau festival in Todtnauberg. The next one will take place in April 2016 and will be organized by Boch. Along with other local pastry chefs, he'll teach tourists and locals in courses and seminars how to turn cherries, cream and cherry schnapps into the delicious dessert.

As the gateau is not trade-mark protected, anyone anywhere in the world can make one and change things around too. Five years ago a baker from the Black Forest region developed a new version from the original recipe - but this time it is in a tin can.

Today we visit the southern German Black Forest. Home to the cuckoo clock and the Bollenhut, the region is popular with tourists from all over the world. (06.08.2015)

Eating and drinking is a fundamental part of life in Baden-Württemberg. Gourmets have a great choice here: from down-to-earth local cuisine to sophisticated Michelin star menus. (19.02.2015)

On Friday, the world celebrates International Beer Day! It's the perfect opportunity to shine a light on Germany's legendary beer culture, Beer Purity Law, corner pubs and much more. Prost!