Christian minorities in the Middle East are at risk of disappearing entirely, Roman Catholic and Protestant Church leaders in Germany have warned. They have said religious freedom is threatened worldwide. 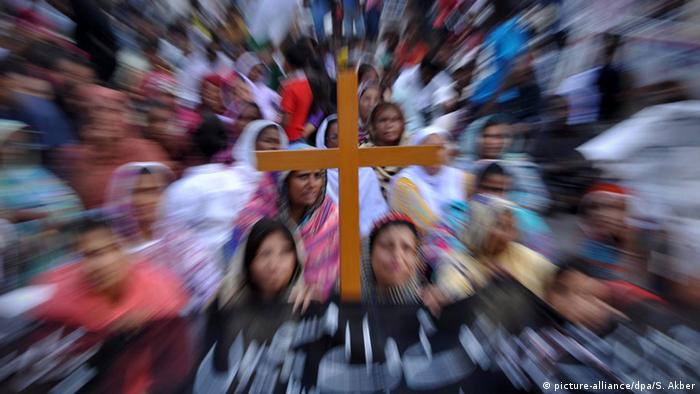 German church leaders on Friday warned that religious freedom is under threat across the world, and that a Christian presence in areas of the Middle East is at risk of disappearing entirely.

The German Roman Catholic and Protestant Churches (EKD) published a report focusing on religious conversion to Christianity as a "litmus test for religious freedom." The 70-page report, entitled "Ecumenical Report on the Religious Freedom of Christians Worldwide," was released during the German Bishops' Conference.

While the Berlin conference is organized by bishops of Germany's Catholic dioceses, the report was published jointly by the country's Catholic and Evangelical church organizations. The EKD shared the report on Twitter.

Representatives from both churches said that Christians are especially at risk of having their religious rights infringed upon.

Petra Bosse-Huber, the EKD's bishop responsible for foreign ministries, said: "In our secularized Western society, we can often barely imagine what it means when people are hindered from visiting a mass or reading and studying the Bible with others."

Catholic Archbishop of Bamberg Ludwig Schick underscored that the many Christians abroad who face harassment and discrimination needed solidarity from the German churches.

However, he also argued that advocacy for religious freedom needed to go beyond Christians and include all persecuted individuals. "Our commitment to Christians is exemplary, but not exclusive," he said, also referring to recent displays of anti-Semitism in Germany.

Bosse-Huber and Schick presented the report together on Friday.

'The end of a Christian presence'

The report did not include a quantitative estimation of persecuted Christians worldwide, arguing that more complex analytical tools would be needed to estimate this than are currently available. Instead, it sought to examine the causes, structures and contexts underlying religious persecution.

According to Schick, the three underlying reasons for the repression of religious minorities were religious absolutism, nationalism of a religious majority and authoritarian regimes that perceive religion as a threat.

The report said Christians in the Middle East and North Africa, along with other religious minorities, face the greatest threats. Long-term trends and the effects of the "Islamic State's" (IS) terror "threatened the end of a Christian presence in some countries."

The report also highlighted sub-Saharan Africa, including Northern Nigeria, as a region where Christians are victims of Islamist terror, as well as China, Vietnam and countries of the former Soviet Union, where they face repressive authoritarian regimes.

At the press conference, Schick said he feared that US President Donald Trump's recent decision to recognize Jerusalem as the capital of Israel would increasingly drive Christians to leave the region.

It is the second time that Germany's two biggest churches have joined together to publish a report examining the situation of Christians worldwide. The first one was released in 2013.

The churches said that since the first report's release, infringement on the religious freedom of Christians worldwide has increased.

As Iraq risks becoming a failed state, the toll is also making itself felt in the persecution of minority groups, most notably Iraq's Christians, thousands of whom have been forced to flee the fighting. (01.08.2014)