By refusing to hear the case, Germany's Constitutional Court has ruled that a Muslim boy must attend religion classes and services at a state-funded Catholic school. Church and state are not always separated in Germany. 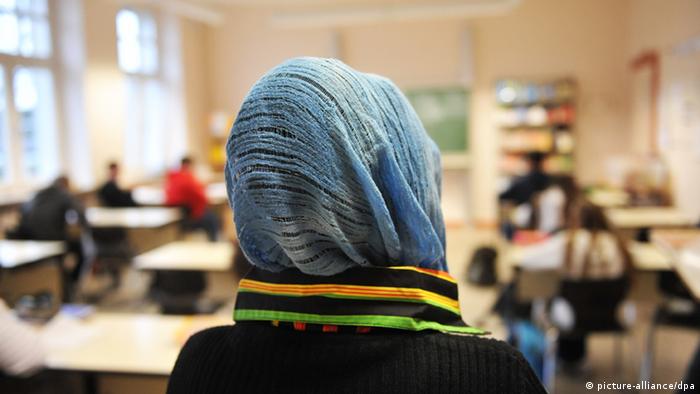 Teachers are banned from wearing headscarves in eight German states

A newly published decision from March reveals that Germany's Constitutional Court rejected a lawsuit by Muslim parents who wanted their son to be exempt from the religious teachings at a publicly funded Catholic school in the state of North Rhine-Westphalia. According to the court, the boy's parents did not make a strong enough argument for the judges to consider the case.

The director of the school, who was not named in the ruling, told the parents that non-Catholic children could only attend the school if they signed a declaration confirming that their son would take part in religion classes and the school's church services.

The Muslim family, identified in the ruling only by the initial S., lived just 150 meters (500 feet) from the school. The nearest non-confessional school is 3.3 kilometers (2 miles) away.

- Could Germany soon have a Muslim holiday?

- Islam in Germany: Muslims prefer to be talked to rather than talked about

NRW is the only state that still maintains publicly funded religious schools.

The court's decision confirmed an NRW administrative court's ruling that states are free to set up publicly funded schools administered by Germany's two official Christian denominations: Catholics and Protestants. These schools are permitted to prefer students from their own religious faiths, but in practice they also give places to non-Christian children when they have space. On the other hand, Article 7 of Germany's constitution, or Basic Law, states: "Parents and guardians shall have the right to decide whether children shall receive religious instruction." 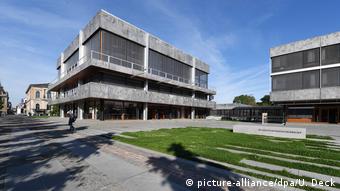 The Constitutional Court decided not to take the case

Michael Wrase, a public law professor at the University of Hildesheim and research fellow at the Berlin Social Science Center, thought the court's decision was problematic. "This is something you could really argue a lot about," he said, before pointing out the legal paradox: "The state is allowed to set up such schools even though it is obligated to maintain religious neutrality."

"It's absurd to force a Muslim child, or an atheist child, to take Catholic religion lessons," he added. "For me that's a major invasion of religious freedom — and I think the court is overlooking that completely in this case."

Wrase acknowledged the special status and character of confessional schools in Germany, but added that if non-Christian children do attend them, "they must have the option of not taking part in religious classes and the school religious services." This would not, he argued, threaten the religious character of the school - as the court appeared to be implying.

The purpose of religious state schools, as defined in the Basic Law, is to educate children about the religious world-view of the majority of the population in a given region. "But that purpose isn't 'disturbed' by the fact that there are students at the school who don't attend the confessional elements because of their religious faith or world-view," said Wrase.

Hans Michael Heinig, a professor of church law at the University of Göttingen and the director of the legal institute of the Evangelical Church in Germany - the chief Protestant organization - said he understood the logic of the court's decision.

"The argument of the court was quite convincing," he said. "As long as there are religious schools, these schools should be allowed to defend the religious profile of the school, and religious instruction is an important marker of this."

"And, as long as the pupil could go to another school, to a nondenominational school, the court said it is okay that it is forced to join the instruction of a religious school," he added. "I think the legal case is okay."

But the political question is another matter. The constitutional argument that state governments, rather than the federal government, have a right to determine the school system, was designed to guard against Nazi-era centralized interference, though Heinig argues that maintaining publicly-funded religious schools is now outdated.

Wrase agreed. "You could argue just as well that if the state clings on to such a high number of Catholic schools as in NRW ... despite the significant growth in religious and world-view diversity, that that violates the principle of neutrality in the planning and development of schools," he said.

The other problem is historical: In 1949, when the Basic Law came into force, nearly everyone in Germany was a declared member of one or other of the two formal Christian churches, and paid their church tax to the state — so it seemed only natural that the state should fund Christian schools. "At that time it was not really a problem to have denominational schools," said Heinig.

Heinig said political cowardice was in part to blame for the problems associated with public religious education in NRW: The Social Democrats, who governed Germany's most populous state for many years, "didn't want to have a conflict with the Catholic church in the state, so they didn't touch this school system."

This is in contrast, oddly enough, with Bavaria, which has a much larger Catholic population and is governed by the conservative Christian Social Union, but has a much more secularized school system. In many areas, officials enforce a strict separation of religion and government in schools: Eight of Germany's 16 states have banned female teachers from wearing headscarves as part of their religious expression.

"It's really out-of-date," Heinig said of the situation in NRW. "But it's not a legal problem; it's a political problem. The government has to change the system there. It's quite easy: I think there should not be public religious schools for one religion. There should be a school system for all religions — with religious instruction for those that are religious, but no obligation to join this instruction."

Cooperation with the Turkish-German Islamic association DITIB is on the brink of collapse. Germany's most populous state is considering not signing the planned contract with DITIB over religious education. (06.09.2016)

An Islamic school near the city of Yogjakarta in Indonesia is teaching deaf and hearing impaired children and young adults to recite the Koran using sign language. For many it is the first time they have been given such an opportunity.