Olaf Scholz is set to meet the US president for the first time since becoming chancellor. The White House said the two leaders would discuss the ongoing tensions with Russia over Ukraine. 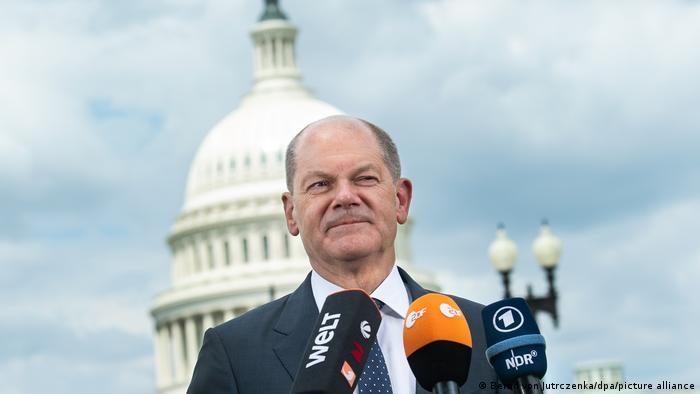 February's visit will not be Scholz's first time in the White House, having been there before in his role as finance minister under Angela Merkel

US President Joe Biden will host German Chancellor Olaf Scholz at the White House on February 7, White House Press Secretary Jen Psaki said on Thursday, confirming earlier media reports on either side of the Atlantic.

The two leaders will discuss Russian "aggression against Ukraine," Psaki said, adding that the visit "provides an opportunity to affirm the deep and enduring ties between the United States and Germany."

"They will also discuss the importance of continued close cooperation on a range of common challenges, including ending the COVID-19 pandemic, addressing the threat of climate change, and promoting economic prosperity and international security," Psaki said.

Biden spoke with Scholz in December to congratulate him on becoming Germany's new chancellor, after 16 years of Angela Merkel holding the job.

Scholz's inaugural visit to the US follows his tour of several European capitals including Paris, Brussels and Madrid since becoming chancellor.

Traditionally the US is among the first ports of call for a new German leader, given the close ties between the NATO partners since the end of World War II. Germany's comparatively good relations with Russia by NATO standards also make it an important actor amid the current tensions over Ukraine.

Germany is not only Europe's biggest economy, it is also the endpoint for Russia's Nord Stream 2 pipeline.

Washington had originally opposed the construction of the pipeline but has restrained its criticisms to maintain good relations with Germany.

However, pressure is now increasing on Berlin to put an end to the whole project — which has been completed but not yet activated — should Moscow go ahead with an invasion of Ukraine.

In fact, the US State Department on Wednesday announced that a Russian invasion would indeed mean the end of the project.