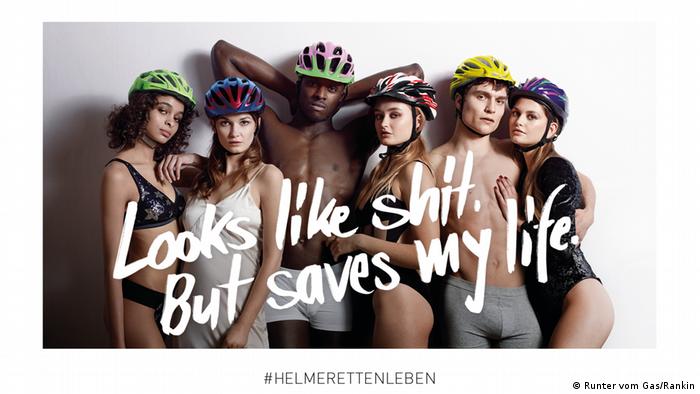 The German Transport Ministry's provocative marketing campaign to boost the use of helmets while riding bikes has been denounced as sexist by several female politicians.

"It is embarrassing, stupid and sexist for the transport minister to be selling his policies using naked skin," said Maria Noichl, the chairperson of the Working Group of Social Democratic Women (ASF), in an interview with the Bild am Sonntag newspaper. She said the posters "must come down."

The ministry said that "many young people go without helmets for aesthetic reasons. And the campaign aims to change that!"

The ad can be seen in several German cities this week.

The deputy leader of the SPD's parliamentary group for women, Katja Mast, also called the campaign "embarrassing, stale and sexist."

"Taxpayer money should not be spent to put half-naked women and men on posters," she told the Passauer Neue Presse on Saturday.

Josephine Ortleb, also from the SPD's parliamentary group for women, told the paper that the campaign needed "neither women as objects, naked skin nor sexism to make young people aware of cycling safety."

She said the "sex sells" campaign proves that the government urgently needs a strategy for gender equality.

The spokesman told German news agency EPD that the main target group was young people who refuse to wear them for aesthetic reasons.

An initial evaluation had revealed that the campaign has been effective at reaching out to the target audience.

The posters, however, drew further criticism on social media for other reasons, including accusations of victim blaming by emphasizing the need to wear helmets.

Others blamed drivers and a lack of separate cycle lanes in several German cities for the number of accidents involving cyclists.

However, many social media users, along with Germany's road safety association DVR, backed the suggestive ads.

"It's important to reach the target group of young people because the helmet wearing rate in this age group is terribly low. We succeeded in doing that," said Christian Kellner, the DVR's chief executive.

"The helmet cannot prevent accidents, but it can protect against life-threatening head injuries."

The number of accidents involving injuries to cyclists in Germany has stayed "more or less consistent" between 2000 and 2017, the latest year from which figures are currently available, according to a report from the German transport ministry.

Older cyclists were much more likely to die in an accident with 65 percent of cyclists killed in 2017 over 60 years old, a figure partly explained by an increased use in electric bicycles, the report said.

The number of cyclists wearing helmets rose slowly to 17 percent in 2017 but the numbers varied drastically across different age groups. Whereas 72 percent of 6- to 10-year-olds wore a helmet, less than 10 percent of 17-30 year-olds — the target group of the new campaign — used them.

In the rest of Europe, between 15 and 17 percent of cyclists wore helmets in Finland, the United Kingdom and Sweden compared to 6 and 7 percent in Switzerland and Norway. 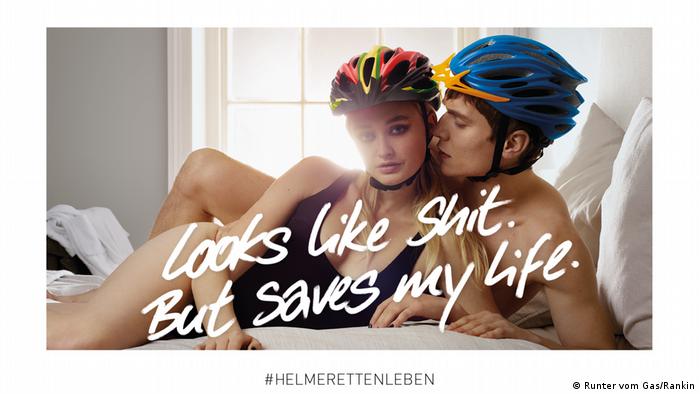 The debate over whether helmets should be mandatory has been contested over the years. A 2019 study from Australia, where helmets must be worn, said deaths fell by 46 percent immediately after the law was introduced in 1990-92.

Other health professionals in that country argued mandatory helmet laws saw a significant fall in cycling in general, possibly outweighing the health and safety intentions of the rules.

In the Netherlands where cycling is notoriously popular, the government has traditionally privileged the cyclist in its regulations, making streets generally safer for them to use rather than putting responsibility on the individual cyclist.

An absurd zig-zag bike lane comes as the German capital seeks to model itself after bike-friendly cities like Amsterdam and Copenhagen. It's apparently a hard path to follow. (09.08.2018)

Happy 200th birthday, bikes! Made in Germany, conquering the world and saving the Earth

The simple two-wheeler, first invented in Germany in 1817, has evolved into a fast, fun and green machine. As bicycles continue to evolve, cities welcome their eco-benefits, while riders appreciate their convenience. (12.06.2017)