Happy 200th birthday, bikes! Made in Germany, conquering the world and saving the Earth | Environment| All topics from climate change to conservation | DW | 12.06.2017

Happy 200th birthday, bikes! Made in Germany, conquering the world and saving the Earth

The simple two-wheeler, first invented in Germany in 1817, has evolved into a fast, fun and green machine. As bicycles continue to evolve, cities welcome their eco-benefits, while riders appreciate their convenience. 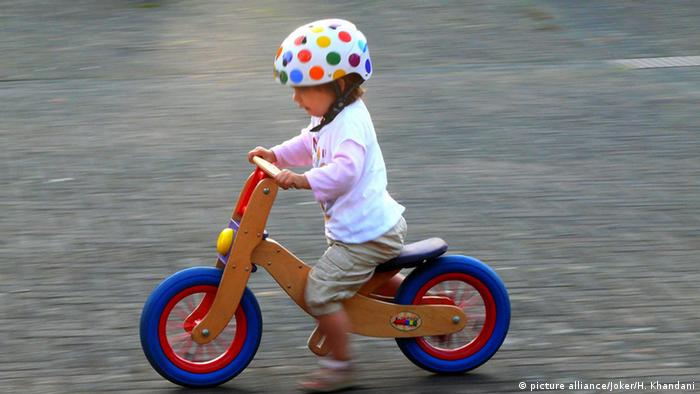 It's common sight in Germany to see toddlers younger than two rocketing along the sidewalk on a balance bike, a kind of parsed down bicycle without pedals. The kids push themselves along with their feet, often gliding along at considerable speeds.

But what many don't realize is that this balance bike is a direct descendant of the world's first two-wheeler, invented in Germany in 1817.

"It's ridiculously easy to ride," shouts bicycle enthusiast Martin Hauge as he takes a reproduction of the world's first bike for a spin. "You just need to keep one foot on the ground and kick alternatively with your left and right foot, steer, and you start to roll."

The wooden proto-bike clatters loudly down a cobblestone street in the southwest German town of Karlsruhe, the birthplace of the bike's inventor: Baron Karl von Drais. Lacking cushioning rubber tires and weighing around 30 kilograms (66 pounds), it makes considerably more racket than balance bikes.

And like the balance bike, the Draisine is also missing other components usually found on modern bicycles such as a chain, gears and pedals. 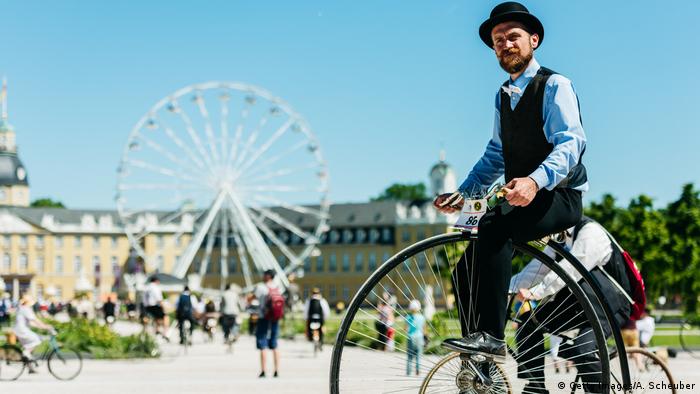 The bicycle has evolved considerably since 1817, and continues to evolve - including the major development of e-bikes. Modern cities, built around cars, are accommodating what might be described as a bike renaissance in some places.

In addition to being a convenient and cheap way of getting around, the humble bicycle brings welcome benefits of cleaner air, fewer greenhouse gas emissions, quieter streets and healthier inhabitants.

Drais coined the name Laufmaschine (running machine in German) to describe his new contraption, although the press were quick to name it the Draisine.

When invented in 1817, the running machine was the world's first steerable two-wheeled vehicle powered by humans rather than horses - the main means of transportation at the time.

Drais, a prolific inventor, was inspired by the desperate need to find an alternative to the horse. In 1815, Indonesia's Mount Tambora erupted, sweeping ash and gasses across central Europe and blocking out the sun. The snowy summer that followed caused harvests to fail. As starvation set in, horses were slaughtered, says Hauge.

"Then [he] had the absolutely marvelous idea of putting one wheel behind the other!" says Hauge, who curated a Drais exhibition in Karlsruhe in celebration of the bicycle's 200th anniversary. 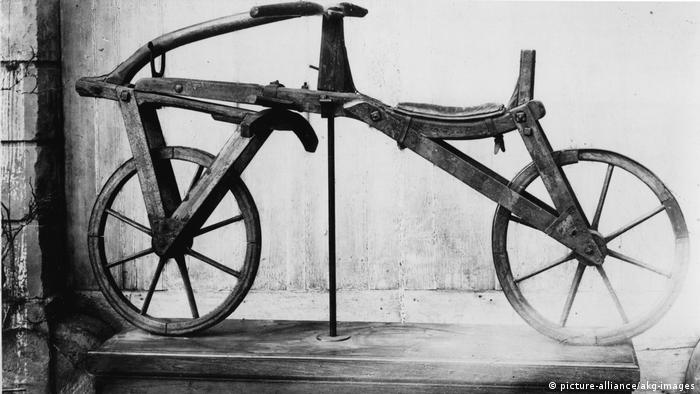 The Draisine: A bone-rattling invention

The Draisine became an instant craze, inspiring versions around the world.

"It looks nice but you can't go far," says Stephanie Poole from England, sitting astride a Draisine-inspired copy during a historical bike rally in Karlsruhe.

Although it wasn't a commercial success, Drais's machine inspired others to continue to tinker with the design. Over the next 60 years bikes gained pedals, started to be manufactured from hollowed-out metal to reduce the weight, grew a giant wheel at the front to create the penny farthing (or high bike), and shrank in size again.

Then, in 1879 the bicycle gained a chain attached to the rear wheel - making it easier to ride - and in the late 1880s, air-filled rubber tires that made riding on the road less of a bumpy affair.

The modern bicycle had arrived! 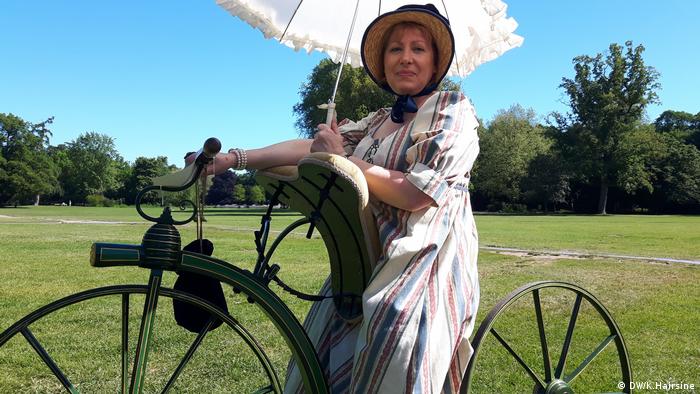 At a bicycle celebration in Karlsruhe, riders like Stephanie Poole appreciate the historic Draisine

Cycling had a heyday of several decades in Europe before being swept aside by the motor car (which, incidentally, was also invented by a native of Karlsruhe, Carl Benz).

But now, 200 years after the bike's invention, cities around the world are pushing urban cycling as a way of curbing environmental problems such as traffic congestion, harmful pollution and greenhouse gas emissions.

Drais would probably be proud of his birthplace. Karlsruhe is now considered the second-most bike-friendly city in Germany, after introducing a dedicated bike policy in 2005.

"If we didn't start to push bicycles, we would drown in motor vehicle traffic," said Johannes Schell from Karlsruhe's town planning office. In 2012 (the last year measured), 25 percent of all trips were made on two wheels - a 10 percent increase over the previous decade.

Cycling is much more fun - and faster - than driving, says Heinz (who didn't want to give his last name), a fit-looking 72-year old who rode 14 kilometers (9 miles) into Karlsruhe to watch the historical bike rally. 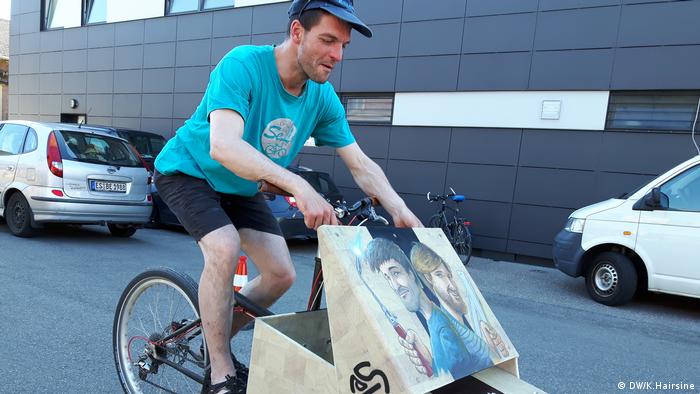 Cargo bikes represent a further evolution of the bicycle

And for visitor Jean Pierre van de Pere from Antwerp, another of Europe's developing cycling cities, riding is about "the freedom to go where he wants when he wants" (although because he rides a 1950s bike with wooden wheels, he can't go far when it's hot without watering his rims in case they catch fire).

In fact, surveys of urban cyclists repeatedly find that people's main reasons for riding isn't to save the planet - rather, it's because cycling is the quickest and easiest way to get around town.

To try to make urban cycling even more practical, the humble bicycle is being tinkered with again.

There's the innovation of electric bicycle of course, which, thanks to small electric motor powered by a battery that is recharged during riding, allow people like 70-year-old Ursula Lederle to commute longer distances or keep riding as they age.

"My hips aren't so great anymore," says Lederle as she rides around Karlsruhe castle. "But I ride everywhere on my electric bicycle and I love the speed and the freedom."

Then there are cargo or utility bikes. They aren't exactly a new concept, having been used to haul everything from mail to milk in the early 20th century - but they are becoming a common sight again in many European cities, from Berlin to Copenhagen. 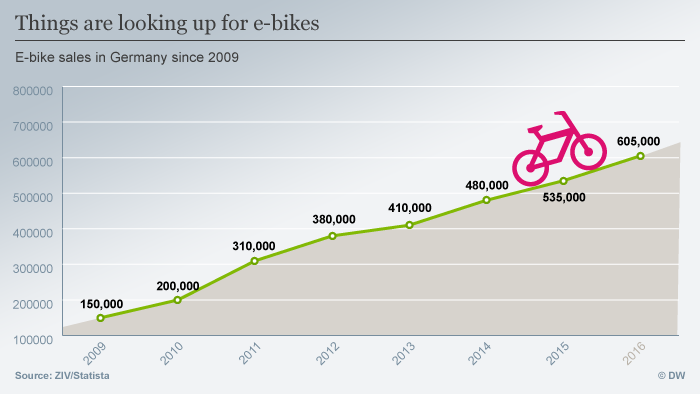 In 2016, Germans even bought more e-cargo bikes than electric cars, despite huge government subsides for electric vehicles, says Arne Behrensen, a cargo bike expert in Karlsruhe who organizes a cargo bike roadshow.  And delivery companies such as DHL, UPS and Amazon are all starting to experiment with high-tech cargo bikes, he adds.

But if innovations such as the e-bike and e-cargo bike encourage even more people, and companies to use bikes to get around, one thing is sure. The average bike rider doesn't necessarily need more innovation, but simply more space on the road.

Berlin is not the place for committed cyclists. That's according to two rankings and it confirms the experience of DW's Klaus Esterluss who pedals around the city every day. (24.05.2017)

Pedaling to protect the planet

A start-up is promoting cycling with an app that gives users vouchers for eschewing polluting cars and hopping on their bikes. (02.02.2017)