German beer producers running out of bottles | Germany | News and in-depth reporting from Berlin and beyond | DW | 22.07.2018

With the summer heat leading to increased beer consumption, some breweries in Germany complain about lacking enough bottles and crates. Beer packaging, it seems, is a recurrent, long-term problem for the industry. 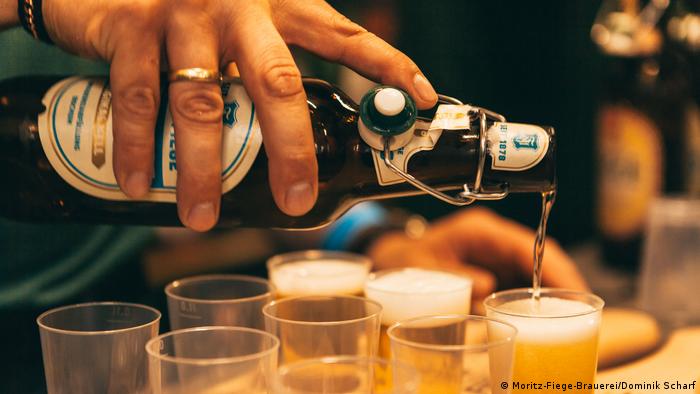 The Fiege brewery in the western German city of Bochum has a problem. Although business is booming in this hot World Cup summer, it's struggling to find enough bottles to put its beer in. So Fiege has launched an urgent appeal to consumers via Facebook.

"We need your help," the brewery wrote. "Although we regularly buy new empty bottles, they're becoming scarce in our bottling facility. So before you go on summer holidays, please bring your Moritz Fiege empties back to the shop. First the deposit, then the party!" 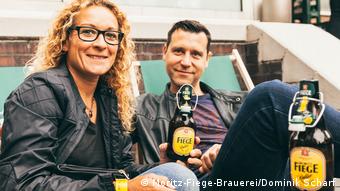 Reusable beer bottles carry a deposit of eight to fifteen cents ($.09-0.18) in Germany, but that's not always enough to motivate people to lug empties back to stores when the mercury rises and they could be, among other things, drinking beer.

The problem is especially acute for independent, regional, family-run breweries like Fiege. A brewery spokesperson told Deutsche Welle that whereas Fiege normally bottles 100,000 to 120,000 beers a day, this summer that figure is up to 150,000 to 160,000. Fiege isn't alone in having this problem, which comes hot on the heels of a shortage of carbon dioxide.

"This issue is dramatic through the industry," the publisher of a leading German drinks industry magazine told dpa news agency. The German Brewers Association also says that the scarcity of containers is "especially pronounced" this summer.

And complicating the situation is the nature of beer packaging in Germany, which is a science unto itself. 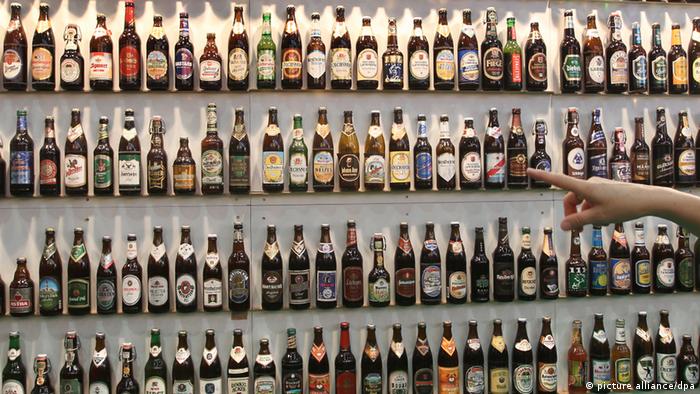 Beer bottles come in a wide range of shapes and sizes

2 billion in circulation, but not always the right shape

There are an estimated two billion reusable beer bottles in circulation among Germany's 82.6 million people, with the containers being refilled on average 36 times. That may sound like enough to meet demand, but not every brewery uses the same sort of bottle.

Bottles in Germany vary from dumpies (also called "steinies") to Vichies to longnecks. Some breweries "personalize" bottles by having their names embossed on the glass. And there are both "Euro" and "NRW" 500 ml bottles, the latter named after Germany's most populous state North Rhine-Westphalia, where Fiege is located. 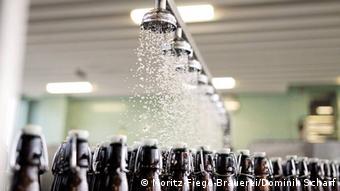 But Fiege uses a bottle with a swing top and porcelain cork. When opened, the cork produces a characteristic "plop" sound so satisfying to many a beer lover, but the bottle is more expensive to keep in circulation and can only be refilled 30 times.

Cans, widely used in the US and the UK, are rightly or wrongly looked down upon for being "unsexy" and environmentally unfriendly. In Germany, it's mostly glass or nothing.

But breweries can't just call up bottlemakers and order more new ones. Glass bottles are produced seasonally, the Fiege spokesperson says, and orders have to be placed a year in advance, with breweries having no way of knowing what the next summer's weather, and hence consumption, will be like.

'Help is on the way'

Although the supply of beer bottles is particularly tight this summer, this is by no means the first time shortages have been felt in Germany. In the summer of 2012, for instance, Munich's famous Hofbräu sold full bottles of beer only to people who brought back empty ones.

The smaller the brewer, the more acute the problem can be. Some craft breweries don't charge deposit for bottles at all because they have no capacity to store empties if they were returned. Instead customers are encouraged to put bottles in recycling bins or take them back to beverage shops.

Massive corporate breweries like Warsteiner and Beck's have the leverage and capacities to avoid bottle shortage problems. But size-wise Fiege is in the middle of these two poles and has had to be creative.

The brewery says the response to its Facebook call for empties has been "overwhelming," with fans of the beer bringing in carloads of bottles and beer crates. One woman even wrote in from Guatemala to say that she had a bottle. And several users responded with pictures of returnables and pledges that help is on the way.

If nothing else, for Fiege, the beer bottle crisis of summer 2018 has turned out to be pretty good publicity.