After his second mission to the International Space Station, Alexander Gerst has returned home. He sent some thoughts about the state of the world before he left the station above the planet.

European Space Agency astronaut Alexander Gerst returned to Earth for the second time on Wednesday after leaving the International Space Station (ISS) with Sergey Prokopyev of Roscosmos and Serena Aunon-Chancellor of NASA.

Gerst, who was born in the southern German state of Baden-Württemberg, had been part of ISS expeditions 40 and 41 from May to November 2014, and went back up to the space station in June.

Live footage of the landing showed Gerst smiling as he was retrieved from the capsule.

"I'm looking forward to flying home and seeing my family for Christmas," he told reporters. "But the mission isn't over yet, we still have to evaluate the results." 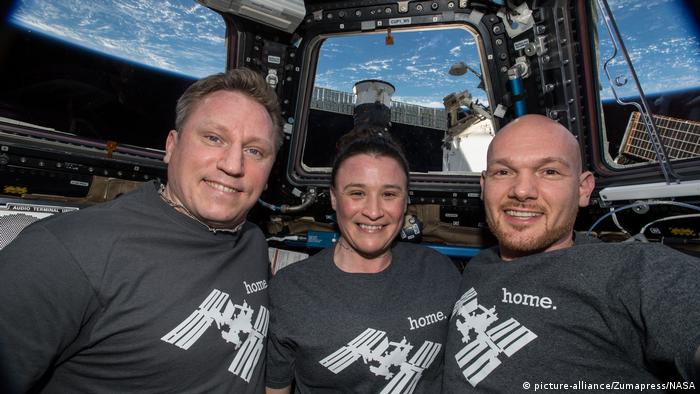 Sergey Prokopyev of Roscosmos, Serena Aunon-Chancellor of NASA and Alexander Gerst of the ESA.

The three descending astronauts landed at 11:02 a.m. (0502 UTC) on Thursday southeast of the remote town of Dzhezkazgan in Kazakhstan.

The trio has been round the earth 3,152 times and traveled 83.3 million miles (134 million kilometers) over the 197 days of their mission.

They were to travel together by helicopter to a recovery staging area in southern Kazakhstan before going their separate ways home.

Germany says 'thank you' to Gerst

Germany welcomed back Gerst as a hero, Foreign Minister Heiko Maas saying he fulfilled his mission and "expanded horizons."

"Be it in science, be it with your moving appeal that climate protection is a question of survival. Respect and above all, thank you," Mass wrote on Twitter.

German Chancellor Angela Merkel's spokesman, Steffen Seibert, also thanked Gerst "for all the impressions from far up above. They show us how unbelievably beautiful but also how endangered our Earth is."

The Foreign Office also joked that their pitch to employees about being able to see the world pales in comparison to Gerst's profession as an astronaut.

"Us: 'The Foreign office is a very special employer. There aren't many professions where you can see so much of the world!'  Alexander Gerst: 'LOL,'" the office said in a tweet.

'I will miss this place'

Space station residents held a change-of-command ceremony with Gerst handing over to Oleg Kononenko of Roscosmos on Wednesday afternoon.

The 42-year-old Gerst — now a European Space Agency record holder with a total of 362 days in space — sent out a series of messages on Twitter, including lines by German-born American poet Charles Bukowski: "There is a place in the heart that will never be filled. A space."

Gerst also included a message to his not-yet-born grandchildren. He apologized for the state of the planet and its resources left by his generation but told them how wonderful it was to be just three people on a spaceship looking at the millions on distant Earth below.

"I will miss this place," he wrote.

Soyuz rocket lifts off with new crew for ISS

A Soyuz rocket carrying three astronauts is headed for the International Space Station. It is the first liftoff from the Baikonur Cosmodrome in Kazakhstan since a mission failed in October. (03.12.2018)

Alexander Gerst press conference: Houston, we have a problem!

"Astro Alex" appeared on screen, smiled at us from space — and was gone. The last Space-to-Earth call with Alexander Gerst before he gets back from ISS lasted five minutes. (12.12.2018)

German astronaut Alexander Gerst returned to the ISS for his second mission in June 2018. On October 3, he took over as the first-ever ISS commander from Germany. But what exactly does a commander do? (03.10.2018)