Alexander Gerst press conference: Houston, we have a problem!

"Astro Alex" appeared on screen, smiled at us from space — and was gone. The last Space-to-Earth call with Alexander Gerst before he gets back from ISS lasted five minutes. 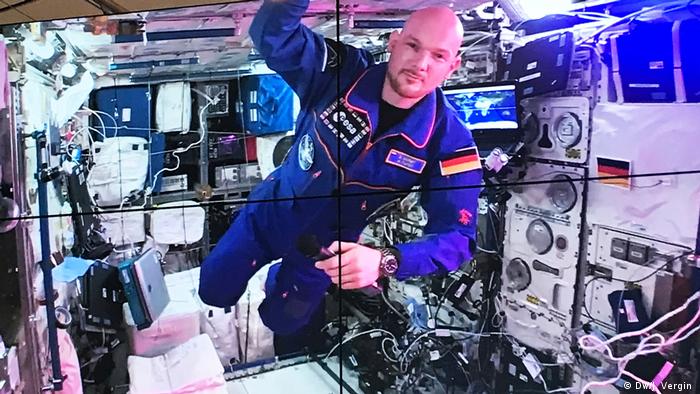 The German Aerospace Center (DLR) in Cologne is full of spaceship and rocket models. Walls are covered in logos of different space missions and pictures of the Europeans who made it into space. A huge, nearly 10-meter wide model of the International Space Station (ISS) hangs above our heads as we are sitting and waiting for the video call with German astronaut Alexander Gerst. He is the first German Commander of the ISS and has been in space for over than six months now. Eight days from now, he'll return to Earth together with two other astronauts. Just in time for Christmas!

With all these models and pictures, the foyer of the DLR feels more like a museum than a conference room. More than a dozen journalists and around 50 employees closely observe the screen hanging under the ISS model waiting for the signal from space. Cameras are ready, questions prepared. The youngest participant of the press conference, a 10-year-old reporter from German TV channel Sat.1 sits in the front row. 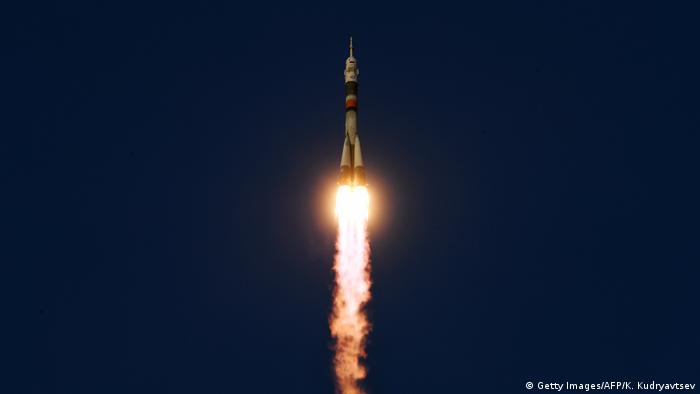 The Soyuz spacecraft shortly after lift-off 3rd of December

We can't hear you, Alex!

At 1:40 pm sharp, as planned, "Astro Alex" appears on screen. Floating in the air in his dark blue uniform, he is smiling at us. So close and yet so far: more than 400 km from Earth. But while we can see him just fine, there's no sound. He moves his lips, he checks his microphone. But there's no audio connection.

After several minutes of trying to fix the problem, Marco Trovatello, spokesperson for the European Space Agency (ESA) has to share the bad news: the audio signal got lost somewhere between the ISS, Houston, where it was first recorded, and Cologne. We won't be able to talk to Alex today. Everyone looks disappointed, especially the young Sat 1 reporter. He doesn't get the chance to ask an astronaut in space a question every day.

"The signal comes from the ISS, which is moving through space at 28,000 kilometers per hour," explains Trovatello. "The signal first travels to Earth to the NASA Space Center in Houston via a telecommunication satellite network, then to Columbus Control Center near Munich and after that, here. And on this long journey something went wrong."

During a six month space mission, ESA usually organizes 10 to 12 video calls between space and Earth. This is the first time a call was cancelled completely due to technical issues.

Safe trip back home to Earth

Luckily it won't be long until we have a chance to see "Astro Alex" again. In only 10 days ESA will host another press conference with the astronaut, this time on Earth and face-to-face. On December 19, Alexander Gerst, together with Russian cosmonaut Sergey Prokopyev and NASA astronaut Serena Aunon-Chancellor, will leave the ISS on-board the Soyuz MS-09 spacecraft. For a brief moment it wasn't clear whether the departure would go ahead according to plan: A tiny hole was found on the surface of the capsule in August.

On Tuesday Russian cosmonauts Prokopyev and Oleg Kononenko took an eight-hour spacewalk to examine the capsule supposed to take Gerst, Prokopyev and Aunon-Chancellor back home. They removed several layers of insulation and located the mysterious two-millimeter hole. 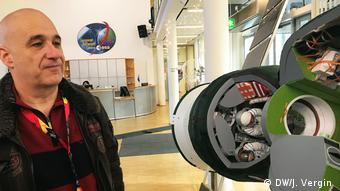 Volker Schmid next to a model of the Soyuz spacecraft

"The hole probably appeared during manufacturing," explains Volker Schmid from the DLR. "When we first heard about it, our alarm bells went off, of course. If we hadn't been able to fix [the hole], the mission would have had to end quickly. Astronauts need the ship to get back."

Luckily the cosmonauts were able to localize and fix the hole quickly. The spacewalk was an extra security measure to see how the spot where the hole was looked from the outside. They confirmed that it wouldn't be a problem anymore. Gerst and his colleagues will make it home safely, Schmid promises.