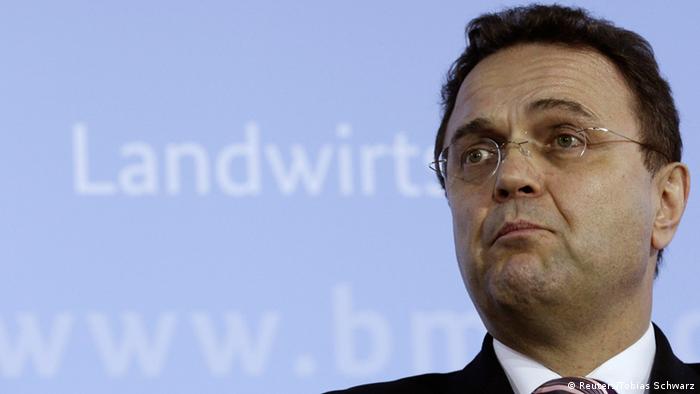 Agriculture Minister Hans-Peter Friedrich officially announced his resignation on Friday during a press conference in Berlin amid accusations he shared confidential police data about a fellow lawmaker suspected of possessing child pornography.

The conservative member of the Bavarian Christian Social Union (CSU) said he remained convinced that he had acted appropriately but the pressure surrounding the issue had grown too much for him to stay in office.

"To you, ladies and gentlemen, I say 'Auf Wiedersehen' - I'll be back," he said.

Merkel lauded Friedrich's accomplishments on counterterrorism as interior minister, a position he held from March 2011 to the end of 2013. She especially praised his inquiry into the shortcomings of the investigation of the far-right terror cell, the National Socialist Underground (NSU).

As for his replacement, Merkel said, "It is not the time to speak of a successor." However, she said CSU leader Horst Seehofer would "promptly submit a proposal" to fill the agriculture minister position.

Friedrich had earlier said he would resign if a formal inquiry was opened against him for passing on the confidential police data.

Social Democrat Party (SPD) leaders confirmed on Thursday Friedrich had informed them back in October of the investigation into fellow party member Sebastian Edathy, who has been targeted by authorities as part of a child pornography investigation. Revealing such information would be a breach of German law.

At the time, Chancellor Angela Merkel's conservative Christian Democrats (CDU), and its CSU sister party, were in coalition talks with the SPD.

Edathy's home was raided on Tuesday by police searching for child pornography. He resigned from his role in the Bundestag last week, but has denied any criminal wrongdoing.

Edathy, 44, is well-known in Germany since he led a parliamentary panel last year investigating why police and intelligence services failed to stop the NSU neo-Nazi murder spree.

Prosecutors in Hanover, who are investigating Edathy, have complained that the leaking of information may have compromised their case. Hanover prosecutor Jörg Fröhlich told a news conference on Friday that Edathy appears to have been given advance warning of the investigation.