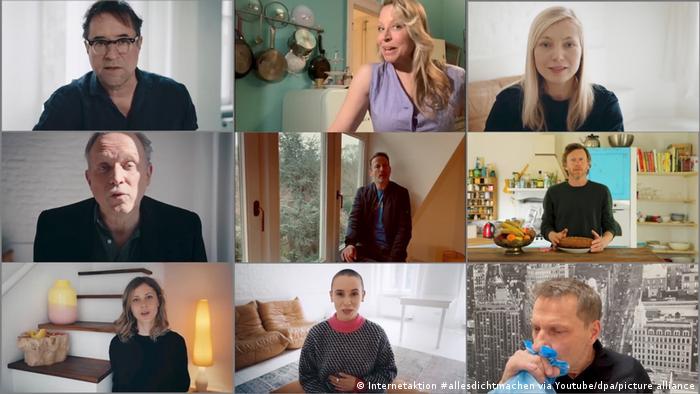 Some 50 actors contributed to the series #allesdichtmachen

Using the hashtag #allesdichtmachen (which means "close down everything," or, literally translated, "make everything tight"), a series of videos in which several dozen prominent German actors make short statements was released on Thursday evening, and the campaign quickly went viral.

According to the actors, the some 50 videos are to be understood as satirical takes on the German government's COVID restrictions.

But the campaign is polarizing the cultural community and social media users across the country. While many have criticized it as tasteless or cringe-worthy, COVID-deniers are rejoicing to find material supporting their own criticism of the authorities' handling of the pandemic.

Among the actors who have contributed to the series is Ulrich Tukur, best known in Germany as one of the investigators in the crime series Tatort, and who also starred in the Oscar-winning film The Lives of Others (2006).

In his clip, Tukur calls on the government to close absolutely every business, instead of trying to determine which ones are to be considered "essential services." Even supermarkets should close, he says, to ensure that "not only our soul starves."

"Once we're all dead as a dodo, we'll have escaped the virus," he says.

Clearly meant to be understood as comedic overstatements, the main message of the videos is that lockdown measures are exaggerated and that the media is acting as the mouthpiece of the government.

Reflecting directly this idea in his clip, Jan Josef Liefers, another Tatort star, "thanks the media" for ensuring that "no unnecessary critical debate can distract us from approving the meaningful and always appropriate measures of our government." The YouTube video had been watched over half a million times by Friday morning.

Liefers was among the different stars who faced public backlash since his message problematically reflects conspiracy-theorist views on the media serving as "state propaganda." He reacted by explaining in a Twitter thread that his video was to be seen "as an ironic comment on the priorities of the media" and distanced himself from the far-right Alternative for Germany (AfD) party, as well as all COVID deniers.

Other stars of the weekly crime show were quick to condemn the series of videos, including Nora Tschirner and Christian Ulmen. "Is this a 'Make cynicism great again' campaign?" asks Tschirner in an Instagram post. "Today, I'm a bit ashamed of my colleagues," writes Ulmen.

'Cynicism is not helping anyone'

Volker Bruch, best known internationally for his role as inspector Gereon Rath in the TV series Babylon Berlin, claims in his clip that after a year living with the pandemic, "he's afraid that he's not afraid anymore," and he summons the authorities: "Dear government, make us afraid again."

Actor Elyas M'Barek, the star of the Fack Ju Göhte films, commented on Bruch's clip, which the Babylon Berlin star had posted on Instagram: "Come on, that's nonsense. What are you requiring from the government here?" he asks, adding: "Cynicism is not helping anyone."

Enthusiastic reactions from the far right

Among the most prominent politicians to have approved the campaign was Hans-Georg Maassen, the controversial former head of Germany's domestic intelligence agency who has also been accused of courting the far right. Member of parliament Joana Cotar, from the far-right AfD party, has also promoted the series of clips on Twitter as material to reflect upon.

Following the backlash, actors Wotan Wilke Möhring, Heike Makatsch and Meret Becker were the first to decide to have their clips removed from the series.

Heike Makatsch, who has appeared in Hollywood films including Resident Evil (2002),  Love Actually (2003) and The Book Thief (2013), had contributed a sketch in which she explained why she wouldn't go to the door, even though the doorbell kept ringing. To be truly consequent in our measures to curb the spread of the virus, she pointed out in the satirical clip, we shouldn't even open the door to accept packages and delivery services.

After distancing herself from far-right ideologies in an Instagram statement, she also had her contribution withdrawn from the campaign's Youtube channel.

There have already been more than 80,000 deaths in Germany related to COVID, while the country's doctors are warning of supply and bed shortages for regular patients in view of rising coronavirus case numbers.

With this in mind, comedian Jan Böhmermann criticized the campaign on Twitter by referring to a documentary showing how the pandemic is unfolding in an intensive care unit in Berlin. "This is the only video you should watch if you have problems with corona restrictions," he wrote, creating a hashtag playing on the original one, #allenichtganzdicht, which means, "they're not all there."

Germany's Minister of State for Culture, Monika Grütters, similarly reacted to the actors' campaign in a statement on Friday afternoon. "Criticism and alternative suggestions belong to complex decision-making processes related to highly political issues, such as the Infection Protection Act," said Grütters. "With all due respect for freedom of art, I would have liked the actors involved in the '#allesdichtmachen' campaign to have clearly shown more empathy for people who are affected by the coronavirus or those in the health system doing hard work." She added that additional support for freelancers in the cultural sector was being implemented to compensate for their losses.

Producer behind project also a critic of protective measures

According to the legal details on the website of the campaign — which was however down on Friday morning, presumably due to high traffic — the series was produced by Munich-based production company Wunder Am Werk GmbH. The owner of the company, Bernd K. Wunder, confirmed to Spiegel magazine that he was the producer of the videos, but didn't further comment on his intentions. "It's art," he only stated.

Wunder's Instagram account however reveals his views on the pandemic, with him writing about how people "participating in scare tactics are to blame" next to a photo showing face-masked children confined to plastic learning spaces, adding that the "expression 'coronazi' is therefore absolutely justified," referring to one of the portmanteau terms created during the pandemic to disparage those who are extremely strict about the application of the rules to curb the infection.