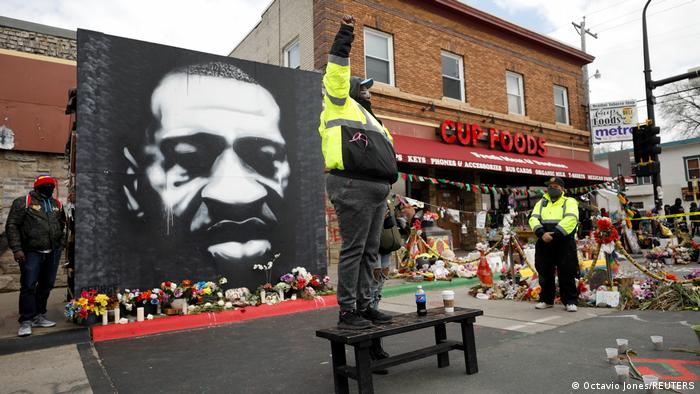 The 12 members of the jury found former police officer Derek Chauvin guilty of the murder of George Floyd on Tuesday in a Minneapolis courthouse.

The jury declared Chauvin guilty on all three charges, namely second-degree unintentional murder, third-degree murder and second-degree manslaughter. The charges carry a possible sentence of up to 40 years in prison.

The jurors deliberated for 10 hours over two days before arriving at their historic decision on Tuesday morning. The verdict was read out later in the day as thousands of National Guard troops and police officers stood by. Police officers in the US have rarely been convicted of murder. 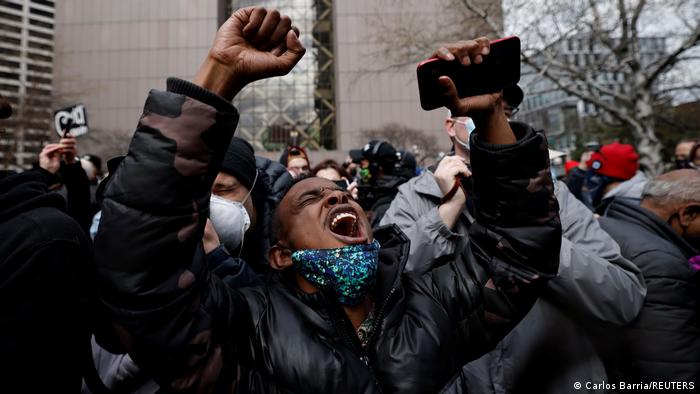 Chauvin, a 45-year-old white man, was found guilty of killing Floyd, a 46-year-old Black man, after kneeling on his neck for 9 ½ minutes in May last year. Floyd's death sparked outrage and protests against police violence and racial discrimination across the US and the world.

Following the verdict, the judge revoked Chauvin's bail and he was led out of the courtroom in handcuffs.

What did Floyd's family say?

People had gathered to wait for the news of the verdict outside the court as well as at the intersection where Floyd was murdered — now named George Floyd Square. The crowds erupted in cheers and chants of "George Floyd" and "all three counts" after the conviction was announced.

"Justice for Black America is justice for all of America," the Floyd family's attorney Benjamin Crump said in a statement.

"This case is a turning point in American history for accountability of law enforcement and sends a clear message we hope is heard clearly in every city and every state."

Crump also shared a video of Floyd's family receiving a call from US President Joe Biden. The president told the family that "nothing is going to make it all better, but at least there is some justice."

Vice President Kamala Harris, who is of Black and Indian origin, hailed a "day of justice in America."

"History will look back at this moment," she told Floyd's relatives.

Judge Peter Cahill said Chauvin was placed in the custody of the Hennepin County Sheriff. Sentencing will take place at a later date.

Three other officers who have been charged with aiding and abetting in Floyd's murder will go on trial in August.

How did Biden react to the verdict?

President Biden held a press conference to speak on the verdict. "Today's verdict is a step forward" and it can be "a giant step forwards toward justice in America," he said.

At the same time, he warned that the verdict was "not enough." 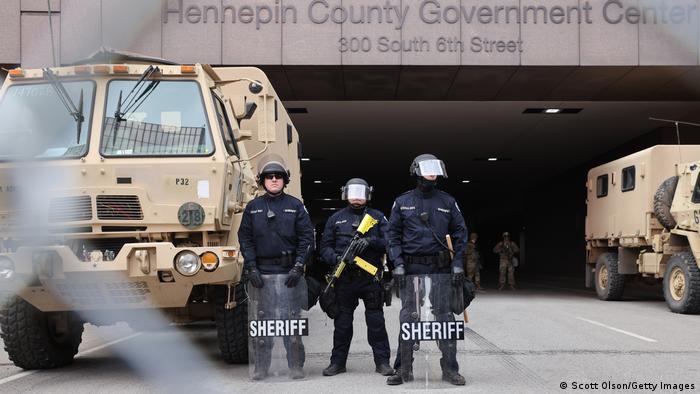 "We are going to deliver real change and reform. We can and must do more to reduce the likelihood that tragedies like this will ever happen again," the president said.

He acknowledged that for many such convictions are "too rare" and in this case, the conviction only happened due to an array of overwhelming factors. Biden and Vice President Harris urged Congress to move quickly on police reform, including a bill named after Floyd.

"'I can't breathe.' Those were George Floyd's last words," Biden said. "We can't let those words die with him. We have to keep hearing those words. We must not turn away. We can't turn away."

He called for local law enforcement and the federal government to "step up" to end police murders so that people do not have to fear for their lives every day.

What did other politicians say?

US Congresswoman Alexandria Ocasio-Cortez, known for her liberal views, warned the verdict only came after Floyd's murder was filmed and protests broke out across the US and the world.

"And this verdict is not a substitute for policy change," she said.

Former President Barack Obama welcomed the news and called the decision correct, but highlighted the importance of further progress in racial justice and equality.

In a statement, he said that "Black Americans are being treated differently every day" and that many live in fear of encounters with law enforcement.

The former Democrat president called for further steps to be taken following the verdict, not just to reduce racial biases in the criminal justice system, but also to tackle the lack of economic opportunities in marginalized communities.

Senator Tim Scott from South Carolina, the only Black Republican in the chamber, also expressed relief after the jury announced their decision, saying it showed that "our justice system continues to become more just."

His fellow Republican Senator Joni Ernst of Iowa had a less enthusiastic response, saying: "I guess I'm in agreement" with the verdict.

"Today, for the first time in state history, a white police officer has been held accountable for killing a Black man," John Gordon, executive director of the Minnesota branch of the American Civil Liberties Union (ACLU), said.

What was the mood in the country before the verdict?

The situation in Minneapolis was tense as people awaited the jury's decision. Some businesses had been boarded up as people feared a repeat of scenes from last year when protests erupted after a witness released a video of Chauvin killing Floyd.

Protesters had gathered in the nearby town of Brooklyn Center last week after a white police officer shot and killed 20-year-old Black man Daunte Wright. The officer in that incident was arrested after she resigned from the force.

Further protests broke out across the country just days after the killing of Wright when police released footage of another police officer shooting a 13-year-old Black boy dead in Chicago.