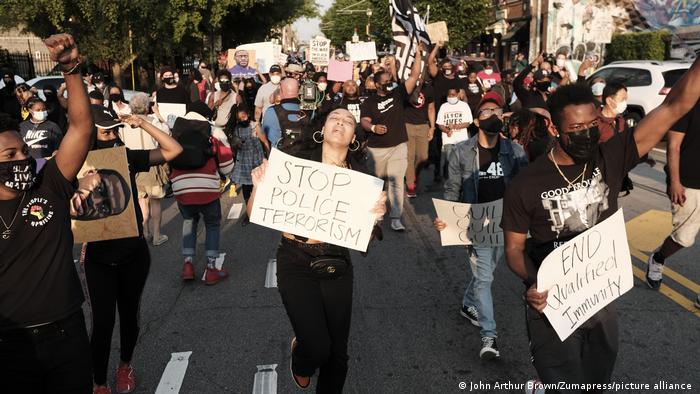 The US Justice Department is launching a probe into policing practices in the city of Minneapolis, Attorney General Merrick Garland said on Wednesday.

Garland's announcement came a day after former officer Derek Chauvin was convicted in the killing of George Floyd.

"I know such wounds have deep roots. That too many communities have experienced those wounds firsthand. Yesterday's verdict in the state criminal trial does not address potentially systemic policing issues in Minneapolis," Garland said.

The attorney general said the investigation would examine whether there was "a pattern or practice of using excessive force, including during protests."

He added it would also examine whether the department "engages in discriminatory conduct and whether its treatment of those with behavioral health disabilities is unlawful."

Garland said a public report would be issued, if the department uncovers a pattern or practice of unconstitutional policing. The department could also bring a lawsuit against the police department,

Garland added that a separate criminal investigation into whether the officers involved in Floyd's death violated his civil rights was ongoing.

A jury on Tuesday found Chauvin, a 45-year-old white man, guilty  of killing Floyd, a 46-year-old Black man, in May last year. Floyd's death sparked outrage and protests against police violence and racial discrimination across the US and the world.

Police officers in the US have rarely been convicted of murder.

The investigation is Garland's first major move after President Joe Biden pledged to address systemic racism in the US.

Following the jury's verdict in the case, Biden said more needed to be done.

"'I can't breathe.' Those were George Floyd's last words,'' Biden said on Tuesday. "We can't let those words die with him. We have to keep hearing those words. We must not turn away. We can't turn away.''

Garland stressed that "building trust between community and law enforcement will take time and effort."

"But we undertake this task with determination and urgency knowing that change cannot wait," he said.

The Minneapolis Police Department is also being investigated by the Minnesota Department of Human Rights, which is examining the department's policies and practices over the last ten years to see if it carried out systemic discriminatory practices.

Minneapolis Mayor Jacob Frey said city officials "welcome the investigation as an opportunity to continue working toward deep change and accountability in the Minneapolis Police Department.''

The city council also issued a statement, saying it welcomed "new tools to pursue transformational, structural changes to how the city provides for public safety."

Medical experts' testimony dismissed the defendant's claims that George Floyd died from previous drug use. The police officer who kneeled on Floyd's was charged with murder and manslaughter.

Former Minneapolis policeman Derek Chauvin is accused of killing George Floyd last May by pinning the handcuffed Black man to the pavement for 9 minutes and 29 seconds.